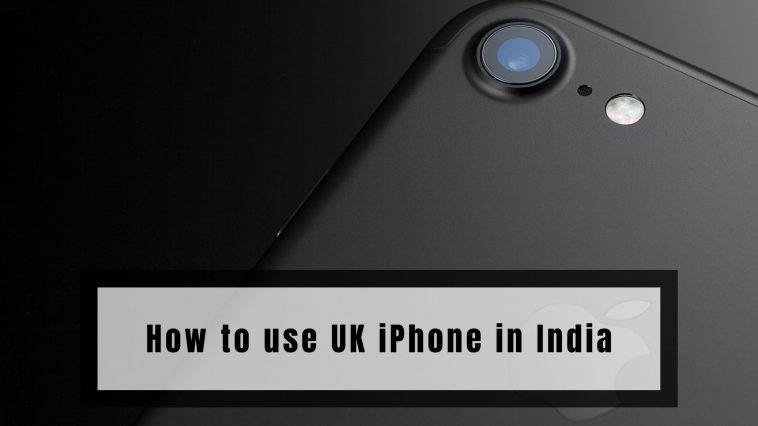 Ever wondered How to use UK iPhone in India? Check out our entire guide for all the details.

Whenever an iPhone releases, it creates such a buzz. I might not be an Apple aficionado but I follow the hype and craze with every release. The iPhone 13 is yet to be launched but has so much going on already.

In my family, I have a few die-hard Apple fans, who are always looking at buying it at a cheaper price. They try to get it from abroad if there are friends and family coming in or they are on the constant lookout for the best deals in the market.

I understand their struggle as they get iPhones way cheaper in the middle east, the USA, and the UK when you compare it to India. All thanks to GST and other taxes levied on premium gadgets.

I always had a question, how to use a UK iPhone in India? Won’t it be locked with a carrier out there? I always wondered what steps you might have to take to get it working here in India.

As I mentioned earlier, the Apple geeks in the family had all the answers. As always, I wanted to share my learnings with all you regulars at this site. So here goes, answers to the question, ‘How to use UK iPhone in India?’

After having reviewed all the latest information from Apple and our sources; my team and I found that:

iPhones from the UK will work in India as long as it is factory unlocked. Apple also has an International warranty which allows the Indians to use the UK iPhone for as long as they want with a year’s worth of warranty. Of course, as the majority of the UK phones are purchased on a contract basis, the user must ensure, that the phone isn’t tied down by a UK network contract.

Related: Can I use UK iPhone in USA?

How to use UK iPhone in India

Will the phone I bought in the UK work in India?

Yes. The factory unlocked iPhone bought from the UK will work well in India. Apple has introduced an international warranty on iPhones, so you enjoy a warranty on newly bought phones from the UK, for a full one year, even in India! That’s great news, isn’t it?

You need an unlocked iPhone as the Indian segment has different frequencies of the network. Each country operates on its own. Usually many countries (Excluding India) issue the iPhones on a contract basis. So be sure the iPhone you have bought is not under any contract. An unlocked phone gives you the opportunity to use any sim in the world on the same phone.

Where to buy unlocked phones in the UK?

You can buy it from Amazon UK using your Indian debit or credit card. There may be a conversion markup fee applicable but that is not much when you compare the price difference.

When you are checking out from Amazon UK, you will have to select the carrier if applicable and confirm that it’s unlocked from that particular carrier. Do check for shipping charges if you decide to ship it to India.

Let’s understand what’s the price difference when you buy an iPhone 12 Pro Max (128 GB) If you buy this model in India, your wallet will be lighter by approximately INR 1,30,000 whereas in the UK it is available at GBP 1099 which is about INR 1,13,313. You can do the math, wouldn’t you be tempted to buy one in the UK? I would certainly be.

You can also check the prices on Apple retail outlets in the UK before getting your iPhone shipped through a friend or relative. There will be offers from Apple on the older models, especially during clearance sales before they release the latest ones.

Use a forwarding service like the Transglobal Express. They have been offering cheap parcel delivery from the UK to India for more than two decades through the world’s most popular carriers including DHL, UPS, and TNT.

This way you get your hands on the latest iPhone before it is released in India.

If you order the iPhone and ship it to India, you need to understand the customs duty and taxes. You will have to bear this expense when the shipment reaches India and as per an article I read in the Economic Times, Post GST, effective from July 1, 2017, the Indian government imposes a  basic customs duty (BCD) on imported smartphones of 10%.

An update also announced that Customs duty on imported smartphones can go up to 20-30%. A few of my colleagues have told me personally they had to pay up to 40% in custom duty fees.

What if I have an unlocked UK iPhone?

If you have a locked phone, you can possibly jailbreak it to get it unlocked but this will void its warranty and also a lot of work finding the right people in India who know how to unlock an iPhone from the UK. This is a possibility but why would you meddle with a new iPhone?

See also  How To Protect MacBook Pro From Scratches | 4 Ways To Make Your MacBook Scratch-proof!

If you don’t want to jailbreak your iPhone, you can connect over WiFi without any problems and use Skype or FaceTime to keep in touch with your friends and family.

What network bands work in India?

Today, phones are designed with tri bands and even quad bands. Most iPhones are equipped with these bands to match the network and LTE bands in India. These phones, known as global phones, can be used on different networks according to user preference.

Make sure you pick the right model of the iPhone you want to use here in India. Certain models are manufactured for different wireless carriers and are compatible with specific bands only.

You need to keep in mind the LTE band is 2300 MHz in India. So choose the right model which supports this band and you are mobile from the get-go on your UK iPhone.

How to use UK iPhone in India? – Takeaway

There are pros and a few cons to buying a UK iPhone and using it in India. If you do not have any contacts or connections traveling from the UK, you better buy it in India.

However, if you have someone in the UK to help, you could ask them to get it for you and pay them for the price. This way you avoid unnecessary costs related to shipping and customs.

If you ask my personal opinion, I would strongly suggest buying a phone in the UK if you are a true fan of the brand Apple and the iPhone itself. I would want the latest iPhone at a price considerably lower than in India if I have been using the brand for a while.

I have tried my best to explain how to use UK iPhone in India. It is all about getting the right deals. You might get a better deal in India sometimes with festive offers. Be ready to grab the opportunity or start saving like I have to get the next iPhone that releases in the UK.

Why go through all the trouble?

A good thing with all factory unlocked iPhones is that it now carries an International warranty, valid from the day the phone is switched on for the first time with an Apple ID. This wasn’t the case a few years ago but Apple changed its policy about 4 years back.

If you are a frequent traveler and have the opportunity to work offshore on a project in the UK, that is the best situation to be in. All you have to do is get the unlocked phone you have bought with you. There will be no issues at all.

The customs duty on an iPhone bought in the UK can be as high as 20 – 30% but usually, this is levied if you have more than one iPhone in your luggage. You might need to declare if you are bringing back two or more phones at customs.

Another thing to remember if you buy older iPhones, you might end up with a European charger which would need an adapter to be used in India. It is a quick fix but I thought I would inform you about it.

Network Roaming, especially international network roaming can insanely expensive. So make sure you check with your carrier before traveling to India. If your stay in India will be for a few months then getting a local SIM would be the best option, as Indian cellular plans are much cheaper when compared to UK and US plans.

Can I use my UK phone in India?

Can we use an International iPhone in India?

Yes, you can use an international iPhone in India, but make sure that the iPhone is unlocked. You will need a local Indian SIM card or a global roaming SIM card to use in India. Check out the answer for will my iPhone work in India in this article