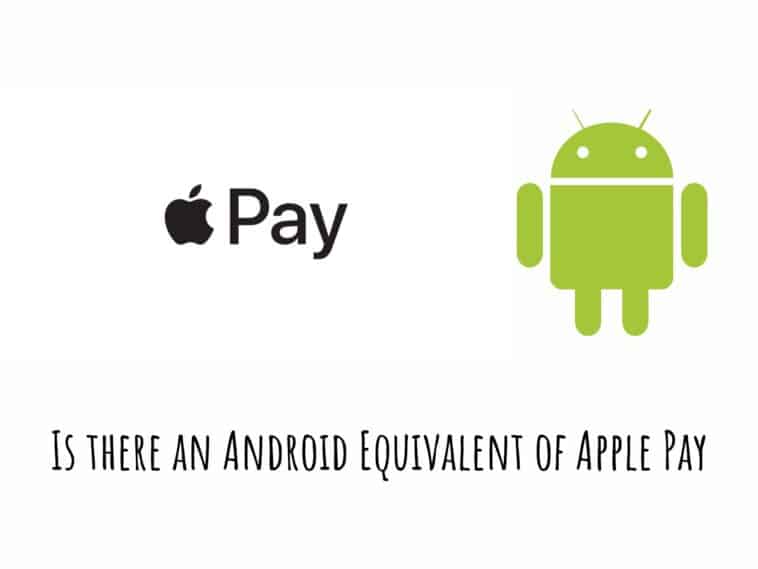 Want an alternative to Apple Pay? Check out our guide ‘Is there an Android equivalent of Apple Pay’ for all the details.

Apple Pay is an excellent way to pay for almost anything. You can purchase online or locally with Apple Pay, and you can transfer money to your friends, families, and other people you know. It is a simple, easy and secure way to make transactions.

What about alternatives to Apple Pay? Especially on the android side of things. Since Apple Pay is not available on Android devices, what services can you use for a similar experience? This article explores some of the popular payment apps similar to Apple Pay.

The answer to Is there an Android equivalent of Apple Pay is Google Pay. While there are many other payment services like Samsung Pay, PayPal, etc. Google Pay is unrivaled because it is supported on all recent Android devices and works in multiple countries.

Google Pay is the best alternative to Apple Pay for Android devices.

Is there an Android Equivalent of Apple Pay

What is Google Pay?

The well-known online payment system Google Pay enables users to send money to merchants, banks, and other Google Pay users. On iOS and Android, it has hundreds of millions of users.

NFC (Near Field Communication), contactless payments, and other capabilities are available with Google Pay. PINs are used by Google Pay to authenticate transactions. Additionally, using it is secure and safe.

How to use Google Pay

Step 1 Download the Google Pay app to your phone.

Step 3 Enter the details of your credit or debit card. Users will be required to enter their card number, expiration date, CVV, and billing address; the issuing bank will verify all of this information. Multiple cards may be added to your account, but only one may be set as the default. You may change this default card at any time.

Step 4 Open your phone’s settings, enter “NFC” in the search bar, then tap to enable NFC (near field communication). Google Pay cannot be used on your phone if NFC is not available.

Step 5 Unlock your phone before making a physical purchase, then tap it on the card reader. Holding your smartwatch close to a card reader until you hear a sound or feel a vibration enables you to make payments.

In addition to whatever benefits you could receive from your credit card, users have the option to also receive Google Pay incentives. By visiting the app’s settings and selecting the “earn rewards on qualifying actions” option under the “offers & rewards” menu, you can sign up for the rewards program.

Depending on the lock-screen security options on your device, you can also use a PIN, password, iris scan, face recognition, pattern, or some Google Pay-capable phones feature fingerprint scanning technology that can be used to unlock the phone.

Every time you see the Google Pay button, you may instantly make a payment using the default card associated with your Google Pay account for online or in-app purchases.

How much money can you send on Google Pay?

When it comes to the quantity of money you can send each day or retain in your account, Google Pay has some restrictions. Additionally, the user’s account status affects this.

Google Pay enables users to have up to $25,000 in their accounts for any user. Unverified users are limited to $500 per week in transfers whereas certified users are permitted up to $5,000 per week.

Can I Send money from Google Pay to Apple Pay

Some of the most well-known online payment systems include Google Pay and Apple Pay. Both offer simple user interfaces that make them simple to use. Both are independent closed payment systems, which means you may only send money to approved vendors or within the system itself.

Can I use Google Pay to Withdraw Money at an ATM

Apple Pay is an online payment system created by Apple. You can use it on the Wallet app on your iPhone. It functions similarly to Google Pay in that you can pay supported banks, suppliers, and system users. However, Apple Pay is exclusively accessible to iOS users, unlike Google Pay.

Features like NFC, Contactless Payment, and more are included with Apple Pay. Additionally, Apple Pay supports PINs in addition to biometrics like Touch ID and Face ID for payment authentication. It provides security and privacy safeguards to protect your money.

How much money can you send on Apple Pay?

Apple Pay has restrictions on the number of transactions it will accept and its maximum balance, the same as Google Pay.

You cannot exceed the $20,000 maximum balance limit for any user of Apple Pay. Apple Pay has a $10,000 weekly transfer cap beyond which you won’t be able to send or receive any more money.

On Apple Pay, there is no distinction between confirmed and unverified users; unlike Google Pay, these limits apply to all users.

For contactless in-store payments, Samsung Pay customers can add up to 10 credit and debit cards to the digital wallet. Additionally, you can add gift cards and membership or loyalty cards to your account.

Samsung Pay is well-liked, much like Google Pay and Apple Pay. The range of devices that Samsung Pay can be utilized with, however, is somewhat constrained. Only specific Samsung devices will support the digital wallet; it is not compatible with iOS devices.

Note that you must update to Android 6.0 or higher in order to use the service on a smartwatch not made by Samsung.

How to use Samsung Pay

Samsung Pay is available in apps that are owned by Samsung, but it is not possible to utilize the mobile wallet to make direct purchases online or in other apps. Here’s how to set up Samsung Pay on a watch or phone that is compatible with it:

Step 2 Set your fingerprint, iris scan (select models only), or set up a PIN.

Swipe up on your phone from the home screen to choose the card you wish to use, then verify your identity with a fingerprint scan or password before placing your phone close to the card reader to finish the transaction. This is how you use Samsung Pay for in-store transactions.

So, Is there an Android equivalent of Apple Pay

Yes, the Android equivalent of Apple Pay is Google Pay. Despite heavy competition from Samsung Pay, PayPal, and other popular payment services, Google Pay reigns supreme simply because it is compatible with almost all Android devices and is easy to use.

It has similar features to Apple Pay. However, if you are a Samsung user, then Samsung Pay might be better across Samsung’s ecosystem.

We hope this guide on Is there an Android equivalent of Apple Pay was helpful.