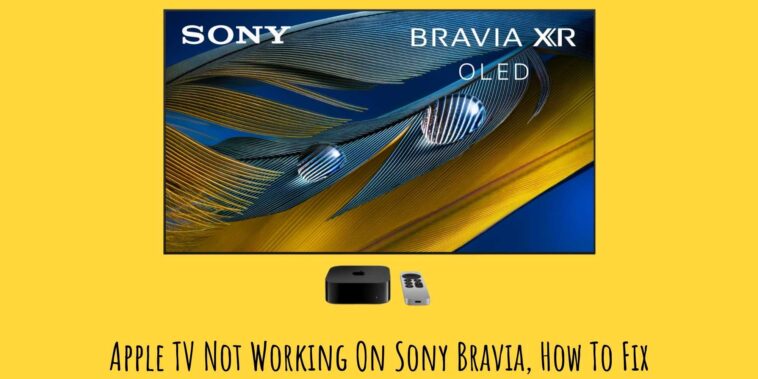 Apple TV is a highly loved product to stream your favorite shows and movies onto your TV. Many TV freaks find Apple TV and Sony Bravia an amazing combination to land a great viewing experience. Apple TV Not Working on Sony Bravia is a common problem many users bring up for discussion on Apple forums.

The glitches you may face when pairing the Apple TV with Sony Bravia could be due to several reasons including the latest Android 9 version, loose optical or HDMI connections, or faulty cables.

Before doing anything else to fix Apple TV not working on Sony Bravia, check the connection spots, reset your Apple TV and Sony Bravia, or roll back to an earlier version of Android. If the problem still persists, do not fret. This article will help you in detail to fix this pairing issue.

In this post, you will learn the different factors impacting the pairing of Apple TV with Sony Bravia. You will also pick up a few easy fixes that can help solve this pairing issue.

If your Apple TV Not Working On Sony Bravia, then try the following,

If you are facing any difficulty performing the above fixes, then continue reading for a detailed explanation of the issue and fixes in this Apple TV Not Working On Sony Bravia, How To Fix guide.

Related: How to Fix Netflix won’t Open on Apple TV

Why is Apple TV Not Working On Sony Bravia

Despite its amazing capabilities, often Sony Bravia does not pair well with Apple TV due to two most common reasons, one related to the connections and the other related to the software.

You must also know that Android and Apple are not quite compatible with each other. Sony Bravia is an Android-based TV and hence it does not have the function to support the Apple TV app. However, AirPlay 2 can help overtake this problem.

To try this fix, first install the Apple TV app on your Apple device, whether it is an iPhone or iPad. Once the installation is done, the features of Airplay 2 can let you display the content directly from the Apple TV app on the Sony Bravia screen.

We will now move on to discuss the other reasons causing the pairing issue and some other possible fixes I will recommend for solving Apple TV not working on Sony Bravia.

Troubleshooting tips for Apple TV not working on Sony Bravia

Apple TV and Sony Bravia have a huge following all over the world. Built on sophisticated technology, these gadgets find their way into households that can afford them. In recent years, a large number of Apple TV users complain that Apple TV and apps are not working well on Sony Bravia smart TVs.

If you face any issues in connecting the Apple TV with any Apple device through the AirPlay app, follow these simple steps below to solve the problem.

Apple TV not working on Sony Bravia can be due to a rare kind of incompatibility issue. Usually, devices that work on different operating systems are often incompatible to work with one another in a seamless manner.

However, this is not the case with Apple TV not working on Sony Bravia smart TV. The incompatibility issue you may experience in this case can be due to other kinds of reasons.

See also  How to Send Photos or Attachments on iPhone? 5 Ways to Attach Files to Emails in 2022

For instance, different Sony Bravia smart TV models may have different software onboard. Also, they may not be up-to-date.  Therefore, older Apple TVs may not be compatible with a few select models of Sony smart TVs.

When you want to use an Apple TV on Sony Bravia, you must first know the smart TV version details of the model you are using.

Here are a few easy steps you can try to resolve the Apple TV incompatibility issue.

Go to Sony Bravia smart TV Settings. Check if Apple TV has been enabled through Sony Bravia’s Privacy Settings. This is the easiest way to resolve Apple TV not working on Sony Bravia issue.

For Apple TV to pair with Sony Bravia, it is necessary that both these devices are connected to the same network.

To do this, you need to follow these simple steps:

If this fix does not solve the issue, you may try the other fixes I have explained below.

If the fixes I have listed above do not work, it is time to reset your devices. Follow the simple steps below to do this.

Follow the simple steps below to reboot both devices.

Once you follow these simple guidelines, you can easily restart both your Sony Bravia smart TV and Apple TV.

If none of the steps we discussed seem to work in your case and you are still not able to pair your devices with each other, you can contact Apple Support for further help.

Apple TV Not Working On Sony Bravia – Take Away

Apple TV and Sony Bravia make a fantastic pair that assures seamless entertainment of enviable quality. Apple TV not working on Sony Bravia is a common issue many users say they come across.

If this must happen in your case, check the compatibility of the hardware and software of the Apple TV and Sony Bravia TV you are trying to pair up.

The troubleshooting tips I have shared in this post will help you pair these two devices successfully and enjoy hours of non-stop entertainment.

Can Apple TV be paired with Sony Bravia?

Technically speaking, you can pair Apple TV with Sony Bravia. A large number of users find this an incredible combination of seamless and high-quality entertainment.
However, both these devices come in different versions. It is important to know which version you are using to start the pairing-up process.

Is Apple TV technology compatible with the different models of Sony Bravia?

4th generation models of Apple TVs are highly compatible with all the different versions of Sony Bravia. On the other hand, the 3rd generation models of Apple TV may not be compatible with several models of Sony Bravia.
To know the compatibility information, you need to check the manuals and also learn how to enable Apple TV through the privacy settings on the Bravia.
To ensure compatibility, it is also important to ensure that the software is updated to the latest version on both devices.