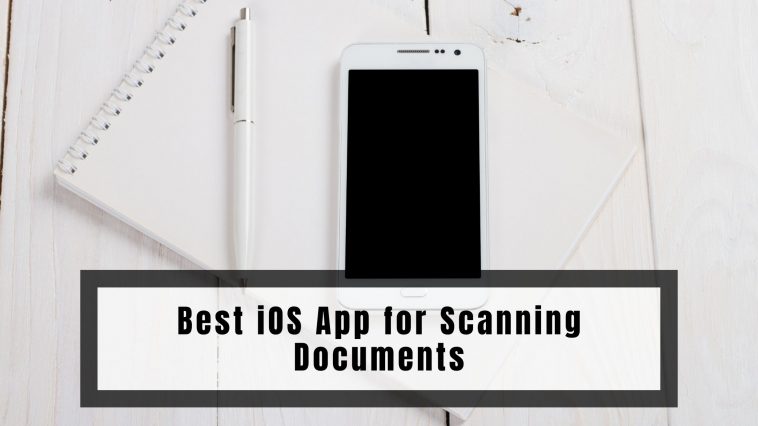 Looking to for a convenient way to store physical documents? Check out our list of the Best iOS App for Scanning Documents!

A few years back, document scanning required huge machines that were specialized to do it. But now with the power of smartphone cameras, you are carrying a scanner in your pockets. You can scan and send any physical document you want using your mobile device.

Taking a photo from your iOS device is technically scanning a document but some specialized apps offer much more in terms of functionality that you can miss.

I have used some of these apps and they make work a lot easier thanks to features like OCR, multi-device support, and the ability to export to different formats.

After having reviewed 100 of the best iOS apps for scanning documents based on various factors like UI/UX, store ratings, performance, features and much more; my team and I zeroed in on 6 that stood out. These 6 were put through a series of tests to determine the best. We found that:

Microsoft Office Lens also has a dedicated Whiteboard Mode which can automatically remove glare and shadow from images. There is also a Business Card mode with which the app extracts contact information like phone number and address and saves it to your address book or OneNote.

Microsoft Office Lens can also make your iOS device into a small Optical Character Recogniser (OCR), which means you can recognize text from a scanned document. It also has image filters, an easy-to-use interface, and scanning modes for different documents. And best of all, it is a completely free application.

If versatility is what you are expecting from a document scanning app for your iOS device, then it doesn’t get better than Abbyy FineReader PDF. It supports 12 file formats, 193 languages, and multiple platforms.

Abbyy FineReader PDF is a document scanner/OCR that can scan and recognize texts in 193 languages. It is compatible with Android and iOS devices so you can access it on any smartphone. The app can also scan handwritten documents and recognize text from them.

With Abbyy FineReader PDF, you can save scanned documents in 12 formats including DOCX, PDF, TXT, and more. And it will preserve the original format after conversion, which is a very convenient feature. You can also add annotations, signatures, and notes to text.

The iOS version of the software has a feature called BookScan with which you can digitize books easily. And once you have scanned a document, you can share it straight from the app using email or through cloud storage lockers like Dropbox, iCloud Drive, Evernote, and more.

Abbyy FineReader is one of the best document scanning apps for iOS devices and it is free to download and use. It offers in-app purchases for some features and extra storage options.

Similar to Microsoft Office Lens, QuickScan is a completely free app for iOS devices that doesn’t have ads, locked features, or any sort of data collection policy. QuickScan is developed by a solo developer over the course of the lockdown. It is aimed to help students that can’t spend money on paid scanning apps.

Even though QuickScan is free and developed by a single person, it works like a charm and can give all the paid apps on this list a run for their money. QuickScan can scan documents that can be saved to PDF, TXT, and other popular formats.

QuickScan also features a built-in OCR which can recognize and convert scanned documents to texts. And the developer is constantly adding features making the app better over time. Some new features include the integration of shortcuts to the app icon so you can scan without even opening the app and edge detection to make it more convenient to use.

For a completely free app, QuickScan offers a lot and is one of the best document scanning apps for iOS devices.

Adobe has tons of software that are aimed at productivity, sometimes I am surprised to learn about a new Adobe app I didn’t know existed. Adobe Scan was one such app and I was pleasantly surprised to discover it. It is a free scanning app for mobile devices like iPhones and iPads, that is easy to use and has integration with other Adobe software.

Adobe Scan includes a preview feature with which you can optimize dimensions, crop, rotate or even edit color based on your needs. Its integration with other apps is probably its biggest advantage over other Adobe apps like Adobe Acrobat and Adobe Fill & Sign. So you can scan, format, edit, annotate, sign and work with other Adobe users at the same time, all of which are very useful for work.

Adobe Scan is a free-to-download and use but it has some features locked, which you can unlock using a paid subscription.

CamScanner is one of the most popular scanning apps for mobile devices. This is the first scanning app I got to know and use. It is simple and easy to use which you can use to scan documents, invoices, and receipts.

CamScanner offers a few features that make it one of the best scanning apps for iOS devices. It saves your documents into PDF for best compatibility. These files can then be directly uploaded to cloud services like Google Drive, Dropbox, Evernote, and OneDrive. This allows offices and yourself to access files scanned from anywhere in the world.

CamScanner is primarily targeted at business users, as they can invite colleagues to view and comment on scans. To do this, the invited user should also have a CamScanner account. You also get access to editing features that let you add annotations and watermarks to documents. And for security, you can block documents behind passwords.

CamScanners is a multi-platform scanning app with cloud support and is free to use, but there are premium plans available too. With premium plans, you get access to 10GB of storage, password protection, and more. The premium account also provides better team collaboration features.

Genius Scan like the name suggests is a scanning app for smartphones that aims to stand out. It does manage to stand out because it is a robust scanning app that includes tons of useful features making it very popular among iOS device users.

Genius Scan’s developers claim that it has scanned over half a billion documents and they describe it as a scanner in your pocket. Genius Scan can turn scanned documents into JPG and PDF files. It also has smart page detection, perspective correction, and image enhancement features which are very useful.

Genius Scan can also enhance the legibility of documents so that they are more readable. It also organizes your document with titles, tags, and a search function. You can upload scanned documents to cloud storage platforms and sync them across devices. Genius Scan also supports encryption for your scanned documents using passwords and Touch ID on supported iOS devices.

Genius Scan is free to download and use but some features are locked behind a one-time fee, which is better than most subscriptions. If you are looking for a document scanner for an iOS device with security features, cloud integration, and multi-platform support then give Genius Scan a try.

To use this feature on your iOS device, open the Notes app and create a new note. Then tap on the grey “+” button followed by the “Camera” icon. This will provide you with the option to “Scan Documents”. You can now take a photo of the document you want to scan and it will get saved in your Notes App.

Additional features include “Markups” using which you can annotate any scanned document. For an in-built scanner on an iOS device, Notes works surprisingly well.

There you have it, the above apps are some of the best apps you can use to scan documents on your smartphone or tablet. They are feature-rich, easy to use, and make life a lot easier. You can scan documents, edit them, add annotations, and send them to anyone with these apps.

All apps in this list are free to use with some apps locking features behind subscriptions. But you can try all;l these apps for yourself and get the one that suits you the most. All the apps are great and you won’t be disappointed choosing any of them.