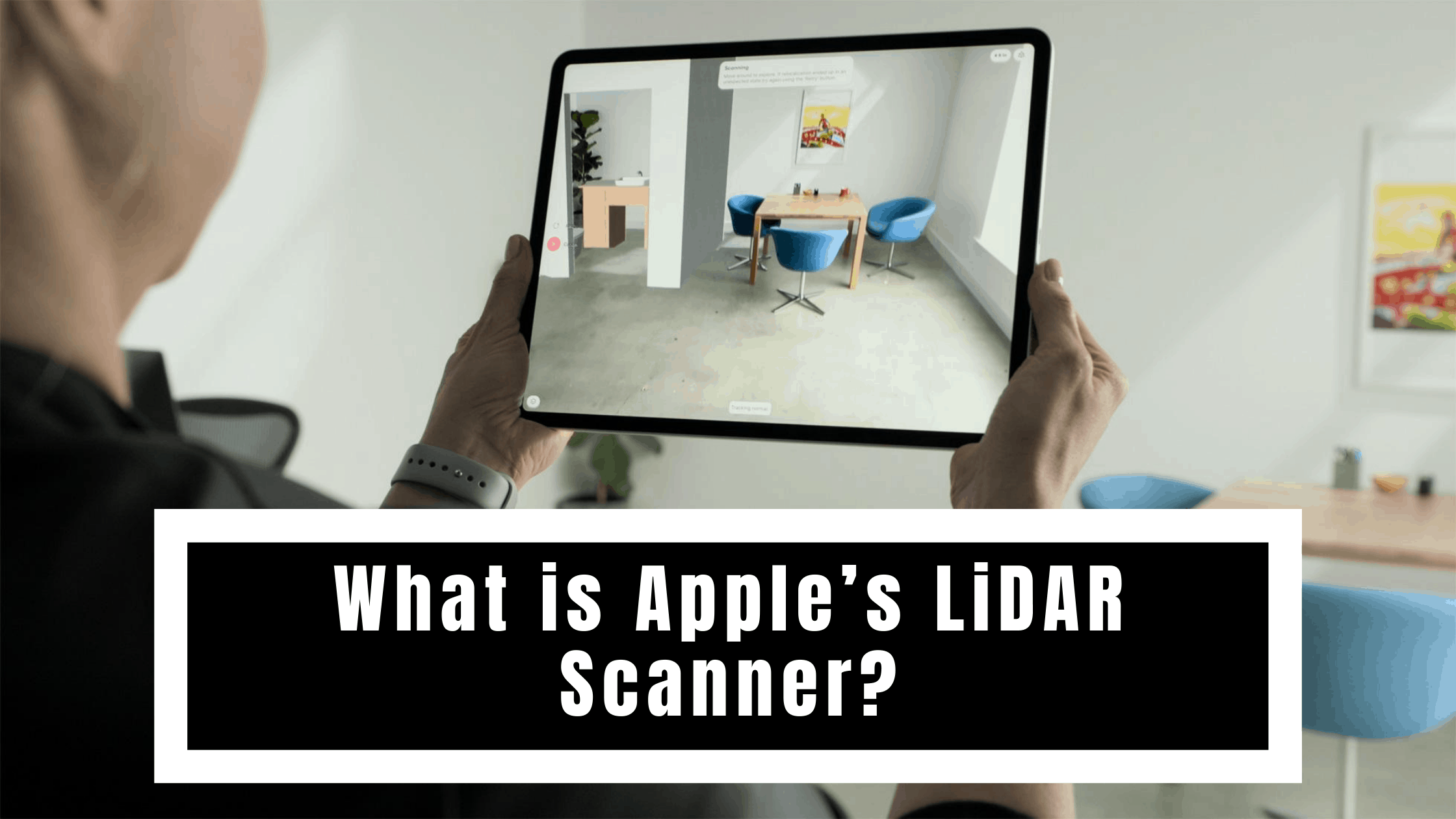 I have always been fed up with using Augmented Reality apps and games on my smartphones as the experience is really terrible. When Apple announced that the new iPad Pro will feature a LiDAR sensor for better AR capabilities, I was thrilled, to say the least.

Apple promised way better AR performance for the new iPhones along with camera improvements as well. So, What is Apple’s LiDAR Scanner? Let’s find out.

This news made me jump on the hype train and check the new iPad Pro’s and iPhone 12 Pro’s prowess with the LiDAR sensors. And when I got to use them, I was surprised at how much better the experience was compared to devices without a dedicated LiDAR sensor for AR.

After going through Apple’s official documents and subjecting various Apple devices to stress tests; my team and I found that:

Apple’s Lidar scanner is a compact device built into various devices including the iPhone and iPad. It provides the user with unparalleled Augmented Reality (AR) experience, better camera capabilities and helps create 3D maps of your immediate surroundings.

What is Apple’s LiDAR Scanner?

What is Apple’s LiDAR Scanner?

Read on to know more about LiDAR and Apple’s implementation of it in the iPhone 12 Pro lineup and iPad Pro (2020) lineup.

Light Detection And Ranging (LiDAR) is a technology that uses lasers to scan and map surroundings. This is similar to how radar, the difference is that radar uses radioactive waves while LiDAR uses light waves. Check out our “What is Apple’s LiDAR Scanner?” guide for all the details.

And Radar is used for faraway objects while LiDAR is used for close-by objects because light gets absorbed easily. It is similar to ultrasonic imaging used by bats to see.

A LiDAR sensor emits hundreds of thousands of light pulses every second, LiDAR can scan the distance and sizes of objects over small ranges. The data collected by the sensors is used to create 3D models, one of the best uses of LiDAR in construction and engineering in recent years.

LiDAR is now used in self-driving cars, for the detection of objects and people. It is also available in automatic vacuum cleaning robots. In the yesteryears, LiDAR was used in military tech and astronomy.

With innovation and technological advancements, LiDAR has improved. The scanners have become cheaper, smaller, and more accurate over time. This is helped LiDAR find its way into mobile devices like tablets and phones.

Here’s the catch, not every iPhone in existence supports the LiDAR functionality. Only a handful of devices come with this unique feature and they are the;

LiDAR in iPhones and iPad

The way LiDAR is implemented on Apple devices is different when compared to other industry implementations. It uses the same principle, to find the distance between objects but in a shorter range.

See also  Can you use WHOOP with Apple Watch in 2022

And in reality, Apple’s intention and use case for their LiDAR sensors was for AR gaming and applications and some camera improvements.

Use of LiDAR in Apple Devices

Apple also said that every existing ARKit app will benefit from the new LiDAR scanners. This will improve the speed, occlusion, tracking, and motion capture for ARKit apps. An update to the ARKit to the new Scene Geometry API will allow developers to benefit from LiDAR scanners in their apps. Check out our “What is Apple’s LiDAR Scanner?” guide for all the details.

What is Apple’s LiDAR Scanner? – Takeaway

Will LiDAR on smartphones and tablets be the future? Will other smartphone manufacturers follow in Apple’s footsteps? Will it actually be the game-changer for AR and Low-light photography that Apple expects it to be? Check out our “What is Apple’s LiDAR Scanner?” guide for all the details.

All of these questions can be answered with a yes and a no. LiDAR can be the future in smartphones and tablets if the technology gets better and better if higher fidelity scanning can be done by the LiDAR scanners on the devices.

If it doesn’t get better or good enough for more applications, it will die like other countless techs that get introduced. I feel that this is an experiment by Apple and they are thinking that LiDAR will be a game-changer and give them an edge in AR and camera capabilities for their devices.

Apart from Apple, app and game developers have to implement and create software that takes advantage of this technology for it to really become something big. This will also make other smartphone manufacturers follow suit and come up with LiDAR or alternatives to improve their game in the AR field.

If what Apple wants from LiDAR actually pan out well, in terms of AR performance and the camera department, I can see LiDAR being a staple in the world of smart devices. Rumors are floating around that we can see LiDAR implemented in more than just iPhones and iPads. Apple’s rumored AR glasses might feature LiDAR for AR implementation.

Should you upgrade for LiDAR? I don’t think LiDAR is a feature you need but from what I tested it is nice to have. If you are someone that uses a lot of AR apps, you can benefit from it, but for the average consumer, more apps and games are needed to wow them and pull them.

It can be something game-changing in the future and there is a lot of untapped potentials which I am sure Apple and app developers would love to work on. It is exciting a new feature that needs more time to see its full potential.

What is Apple’s LiDAR Scanner: FAQs

Does the iPhone 13 have LiDAR?

When it comes to the iPhone 13, the LiDAR scanner is placed on the backside underneath your three cameras. It is the dark circle opposite the flash and can only be used with rear-facing cameras. Remember you need to use an app that has support for LiDAR scanning, which is often combined with some other feature so you cannot use LiDAR on its own, as iOS does not give you direct access to this feature.

What does LiDAR do on an iPhone?

Lidar stands for light detection and ranging, and measures how long it takes light to reflect back from objects which basically creates a depth map of your surroundings. The primary purpose of LiDAR in the iPhone is to improve augmented reality (AR)implementation and give apps more useful and accurate information about their surroundings, for smoother, more reliable AR. Apple’s LIDAR scanner is said to be able to scan objects up to 5 meters away as the laser works at a photon level, it’s able to function night or day, inside or out.

Clean Technica reported that LiDAR is not that safe for the eyes as it consists of laser beams.LiDAR actually stands for Light Detection and ranging which means it can make use of ultraviolet and infrared light to get a better focus of the environment and its surroundings. Some vehicle and smartphone manufacturers make use of this sophisticated technology to upgrade the camera quality. But, some companies don’t use this tech, such as Tesla.

How accurate is the iPhone LiDAR?

The latest Lidar feature found in your iPhone is accurate within a one percent range compared to other models that lack this feature. It offers users an advanced augmented reality(AR) experience and a beneficial photography tool.
You can find the scanner situated under the iPhone 13’s cameras. It is a dark circle that can be found on the right opposite to the flash. Since it can be seen only on the backside of your iPhone, this feature is used only for back-facing cameras.

Which Apple devices have LiDAR?

Does iPhone 7 have LiDAR?

How to Use Apple LiDAR Scanner

You can use Apple’s LiDAR scanner in supported apps like IKEA, LEGO, Measure app, and more. These apps use the LiDAR scanner to create Augmented Reality worlds or measure distance and size.