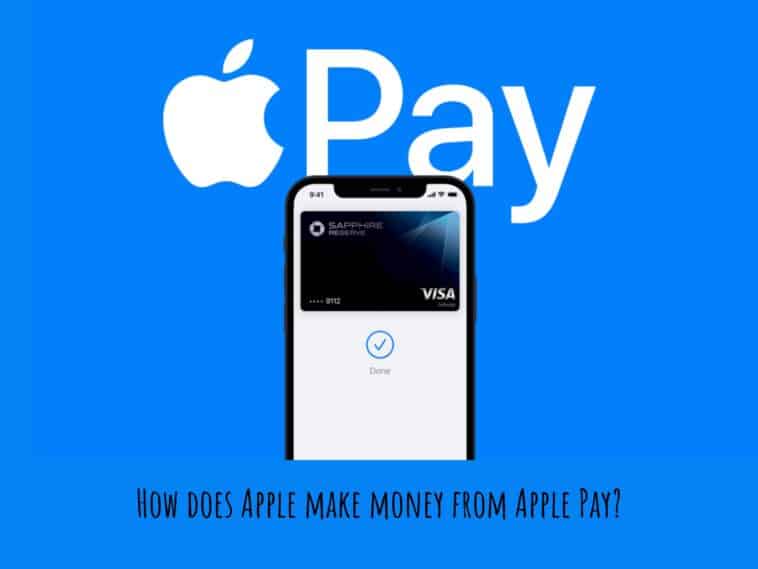 Want to know how Apple makes money using Apple Pay? Check out our guide on How does Apple make money from Apple Pay to know more.

Apple Pay is an extremely popular online payment system. Most iPhone users use Apple Pay as their primary method to send and receive money on their iPhones. This is because Apple Pay is easy and convenient to use.

This might make you question, why does Apple have Apple Pay and how do they make money off it. After all, Apple is a business and everything they do is to make money. So, How does Apple make money from Apple Pay even though it is free to use?

Apple primarily makes money from charging card issuers for transactions completed using Apple Pay. Apple charges 0.15 for every transaction. Apple also has other ways of making money off of Apple Pay and we will explain them all in our How does Apple make money from Apple Pay article.

How does Apple make money from Apple Pay?

Apple Pay is a contactless payment system that enables customers to use their iPhone, iPad, and Apple Watch to make purchases.

The iPhone 6 and newer models’ near field communication (NFC) chip is what allows the service to be provided. Then, the said chip communicates wirelessly with the point-of-sale (POS) terminals utilized by retailers.

All Apple devices already have Apple Pay pre-installed. Users only need to connect their debit, credit, and prepaid cards to Apple’s Wallet app to gain access to it. The user’s default payment card is the first card registered in the Wallet.

Once the card is linked, users can use it to make transactions both online and off. The smartphone model ultimately determines how you can access Apple Pay. For instance, to activate Apple Pay on an iPhone 13, customers must double-tap the Power button on the right.

Apple has also put in place a number of safeguards to protect your personal and financial data. Users may only make payments when they get through Apple’s biometric security measures, such as Touch ID or facial recognition.

Tokenization is a form of encryption that is also used by Apple Pay. Merchants receive a tokenized number instead of your card’s account information, and access to it requires a dynamic security code that changes with each transaction.

Apple has already released more financial goods in addition to its Pay feature. For instance, it introduced an Apple-branded credit card in 2019 in collaboration with Goldman Sachs.

Finally, it should be emphasized that only iOS-compatible smartphones support Apple Pay. As a result, Android users are not permitted to utilize the service.

How Does Apple Pay Make Money?

Apple Pay generates revenue by charging its card-issuing partners a percentage fee and by levying fees on quick transactions.

Apple receives the vast bulk of its revenue from payments in the form of a 0.15 percent fee that it levies against the card issuer.

As was already mentioned, distribution is the key to success here. The more individuals who sign up for Apple Pay and use it, the more money the phone maker will make.

Apple has already taken a range of actions to increase adoption. First and foremost, when older non-NFC devices are replaced with NFC-enabled ones, the introduction of new NFC-enabled devices instantly increases the number of users.

1.8 billion Apple devices are currently in use, most of which were probably acquired when Pay debuted in 2014.

Second, by entering new markets, Apple increases adoption. It frequently does it with the aid of neighborhood banking partners, who encourage their own clientele to use Apple Pay as they make money on the credit card processing fees and are thus incentivized to make it as easy as possible for customers to pay.

Apple, for instance, earlier declared a relationship with the Neobank Revolut. Apple Pay was introduced to 16 additional markets where Revolut operated in 2019 by the challenger bank itself.

Third, Apple and its partners frequently give discounts to entice people to sign up, whether they be banks or merchants. These discounts can range from cash for sign-ups to percentage reductions on purchases.

According to CEO Cook, educating consumers about the device and how to use it is the hardest problem. Customers are significantly more inclined to give it a try if you provide them with a variety of incentives.

Additionally, it is quite unlikely that people will return to using a real card or even cash after they become acclimated to using Apple Pay.

The price that Apple levies for instant transfers inside of its Cash program is another, albeit much smaller, revenue stream.

Users who want to transfer money from their Apple Cash card can either use Instant Transfers to send the money right away to a Mastercard or Visa debit card partner, or they can get the money from their bank account (which takes 1 to 3 days).

As a result, Apple assesses a 1.5 percent fee to users of Instant Transfer. The minimum and maximum fees are $0.25 and $15 respectively.

An important component of Apple’s platform business model strategy is the introduction of supplementary items that it can later monetize.

The products it sells, most notably the iPhone, are what drive it. These devices then serve as a sort of entry point into other goods that Apple can sell and profit from. Services is the new name for the unit under which Pay is classified.

In addition to paying fees, Apple also makes money through services including the App Store (which charges developers a fee), iCloud, the gaming arcade, Music, Apple TV+, and Apple Care.

Apple’s business strategy is thus changing from relying less on the growth of hardware sales to instead extracting more money from active devices. To that purpose, Apple has released a number of software updates that prolong the life of its products.

This transition is especially noticeable when compared to the company’s previous business methods. Apple was fined $113 million in 2020 for limiting performance on outdated devices (a case known as Batterygate).

Surprisingly, that ecosystem concept has been extended to the company’s payments sector as well. Apple’s payment services include not only Pay and Cash but also Pay Later (BNPL) and Tap to Pay (turning the iPhone or iPad into a payment terminal).

To increase adoption, Pay Later and Tap to Pay are not yet commercialized. However, once such becomes commonplace, Apple is sure to turn on the dial (i.e., customers are accustomed to using the product, leading to additional business for merchants).

Apple, for example, could charge merchant fees and interest on its BNPL product. After all, big BNPL firms like Affirm derive the majority of their revenue in this manner.

Apple might also charge merchants for its payment terminal. For comparison, Square’s typical processing cost is 2.6 percent plus $0.10.

The single most significant benefit for merchants is that they would not need to purchase an expensive terminal and could instead utilize an Apple device that they already own.

Apple’s payment and other divisions continue to be plagued by anti-competitive activities. However, it cannot be denied that payment fees have become an important element of the firm’s revenue mix, which is why both analysts and customers continue to be bullish on the company.

How much money does Apple make when I use Apple Pay

Apple is more concerned with the second method but does nothing to track it. They do, however, keep track of the first way.  The second way is also how the majority of Apple’s features generate revenue, however, a few (such as Apple Music and the App Store) generate revenue more directly.

How does Apple make money from Apple Pay – Conclusion

Apple Pay is easy, quick, and convenient to use making it the most popular online payment system. For Apple, this is important as they make a lot of money directly from Apple Pay.

How? By charging card issuers for each transaction. Since Apple only charges card issuers, the customers don’t take a hit and so they make more payments.

We hope this guide on How does Apple make money from Apple Pay answers all your questions.