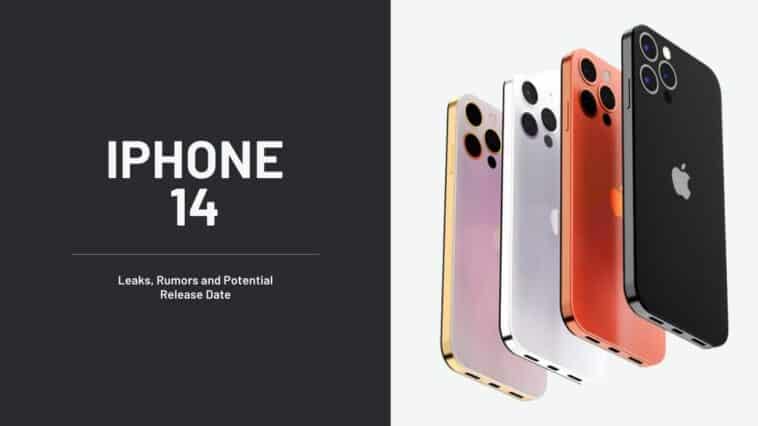 With it only being a year since the release of the iPhone 13 range of smartphones, Apple has gone above and beyond with their new and upcoming iPhone 14 range.

From minor changes to the design to a new stock OS, the iPhone 14 will be one of the most advanced smartphones created by the company till date.

Earlier this year we saw a couple of fleeting glimpses of the device and about a week ago, the internet was flooded with leaks of how the new iPhone 14 is going to look.

Though we’re not quite sure if the design is finalized as yet or not, we are certain that there may not be major changes to the overall look of the phone compared to the 13 range.

From a new notch to a change in the buttons on the side, there are a bunch of speculations floating around online.

I’ll take you through all you need to know about the new iPhone 14 leaks and what to expect for tomorrow’s launch.

Based on rumors we heard from insiders at Apple, the company has decided to eliminate their 5.4-inch range of “mini” iPhone’s and focus primarily on larger flagship devices.

Though we’re not expecting any significant design changes this year, it looks like Apple is going to stick to the primary design of the iPhone and only modify a couple of elements on the device as leaked online a couple of months ago.

So, what should you expect from Apple’s new iPhone 14 lineup? Let’s take a look at what’s been confirmed so far and put some speculations and rumors to rest.

iPhone 14 Launch Date and Pricing – Confirmed or Not?

Given Apple’s pricing strategy, we expect the iPhone 14 range to start from $799 as there’s not going to be any mini version in the lineup.

It will be a virtual event labeled ‘Far Out’ and the iPhone should go on sale the following week.

Many of the renders we’ve come across all seem to be depicting the iPhone 14 Pro and Pro Max with changes to the notch on the  display.

Unfortunately, the iPhone 14 and the Max will not receive any changes as of now and the shift in the notch design will only be for the Pro and Pro Max variants.

It’s going to be an obvious change to the design and if things pan out according to these leaks, then we can expect to see a pill-and-hole cutout instead of the notch on the display.

UPDATE (06-Sept-2022) As per latest leaks, the iPhone 14 Pro and the Pro Max will have a single wide pill cutout instead of the pill and hole cutout.

This is being done so Apple can redesign the camera app in the new iOS 16 and some of the camera controls will apparently be moved to the top of the screen.

You will also be able to see camera and microphone privacy indicators according to recent leaks on Reddit.

Some of the 3D printed models that were leaked in early April show thicker and larger camera bumps, which would usher in new improvements to the wide-angle camera and telephoto lens.

But there’s still a lack of clarity on whether the iPhone 14 will have these changes made to its design.

Apart from this, we’re certain that Apple will stick to their traditional design and avoid making drastic changes to the appearance of the device.

Earlier this year we came across a bunch of rumors stating that all 4 models from the iPhone 14 range will receive the new and updated ProMotion display that has a refresh rate of 120Hz.

But truth be told, that may not happen and would be an exclusive upgrade only for the Pro and Pro Max devices.

Based on display analyst Ross Young, Apple will not be able to obtain enough displays to provide all the 4 models with a ProMotion display.

UPPDATE (06-Sept-2022) As per our latest update, only the Pro and Pro Max will come with a ProMotion display and a basic 60Hz refresh rate.

There’s even a chance that the Always-on feature will only be available to the Pro and Pro Max devices and the standard and Max variants will be left out.

From what we came across on The Elec, a Korean website, there’s going to be at least one model of iPhone this year that will be equipped with a standard LTPS OLED display and will not support 120Hz refresh rate which in fact corroborates Ross Youn’s statement.

In terms of display sizes, the flagships like the Max and the Pro Max will have a 6.7-inch display whereas the standard 14 and the Pro will run a 6.1-inch screen.

However, according to a new patent filed by Apple, they re looking to use a light-folded projector to maximize the display area and decrease the size of the current notch which we most likely should see in the high-end iPhone 14 models such as the Pro and Pro Max.

iPhone’s are coveted for their camera and processing capabilities and we’ve seen some serious improvements in the camera hardware from the 12 to the 13.

Rumors have suggested that Apple might move their Pro range of phones to 48MP wide cameras, but we don’t have any confirmation on that as yet since they’re trying to keep everything on the down-low.

From what we can tell, all iPhone 14 variants will have 7P lenses, but the better processing capabilities would be exclusive only to the Pro models.

There’s even a possibility that the selfie camera might see an upgrade and devices like the Pro and the Pro Max would come with 12MP ultra-wide lenses rather than the old-school 8MP.

Another rumor we saw floating around early this year was that Apple was thinking about improving the aperture and increasing it from f/1.9 to f/2.2.

There’s also scope that the company could include auto focus that can be utilized in FaceTime calls.

Apple has been working around the clock to develop the new A16 bionic chip, but realistically speaking, this upgrade will not apply to the standard variant and we can expect the iPhone 14 and the Max to come with the A15 chip that’s currently running in the iPhone 13 Pro.

Another piece of good news to come out pertaining to the processing capabilities of the iPhone 14 range is that we will see an improvement in the RAM department and all 4 models in the iPhone 14 range are expected to come equipped with 6GB RAM instead of the 4GB RAM that’s currently running on iPhone 13 Pro.

This means that the standard version and the Max should get a bump in its processing capabilities and they would perform on par with the iPhone 13 Pro.

The move could potentially mean that Apple is focusing on the Pro and Pro Max models and would likely drive customers to spend more if they want better performance and technology.

One fan favorite which may prove difficult to implement this year is the in-display Touch ID and while Face ID would still be present as a biometric measure, it’s quite likely that the under-the-display Face ID and in-display Touch ID may only be possible post the iPhone 16 or mostly by 2024 as informed by Ross young.

So, we can expect to receive the same Face ID system that’s currently running on the iPhone 13 range and the components would be positioned within the notch or pill design at the top of the display.

Another likely possibility is that the new iPhone 14 range will be equipped with a new and improved Face ID feature that works with masks. This means that when it’s enabled, the Face ID tool will scan around the eyes and authenticate the user.

From an unverified source, whose post has since been deleted, we should expect the iPhone 14 range of smartphones to come in a wide variety of colors including purple, which Apple has done on earlier standard iPhone models.

However, if the rumor is true then it’s also possible that the iPhone 14 and the iPhone 14 Pro will come with a unique finish where the tone of the color shifts based on the external lightning conditions.

What we can confirm is that the iPhone 14 and iPhone 14 Max should come in gold, silver, graphite and if all goes well then even purple. But, as of now, al we can do is wait until we get a confirmed update from Apple itself.

As of now these rumors are not entirely confirmed and we can’t wait for the launch that’s slated for next month.

Since it’s confirmed that the iPhone 14 will come with iOS 16 preinstalled, we can hope to see a lot more new features and capabilities post the release date in about 5 weeks.

However, at the rate that things are going, i’m not sure that we’ll see the iPhone 14 fly off the shelves as compared to what happened last year at the launch of the 13. We can only hope for the best at this moment.