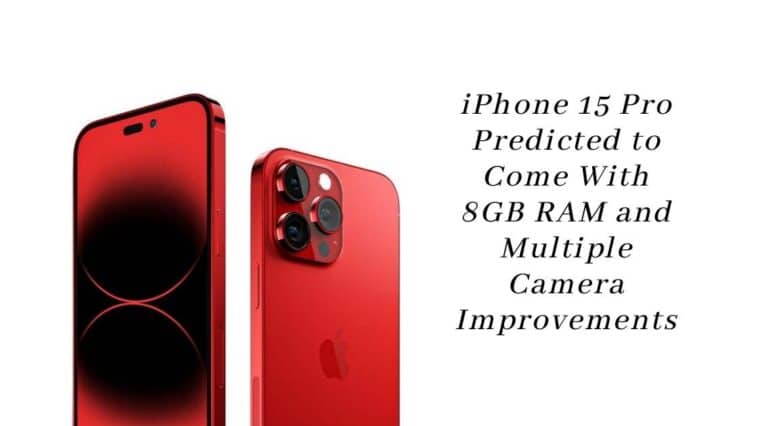 In a press release from earlier today, TrendForce, a Taiwanese research firm, predicted that the iPhone 15 Pro models will feature an increased RAM from the current 6GB on the Pro models, a USB-C port and multiple camera improvements including a new lens.

iPhone 15 Pro Predicted To Come with 8GB RAM and More

According to the report, Apple is expected to release 4 variants of the iPhone 15 and there will be two processors used that will further differentiate between the standard and high-end models.

So by this, we can speculate that only the Pro models will receive Apple’s new 3nm processor whereas the standard model will get the same processor that’s currently powering the iPhone 14 Pro range.

TrendForce also predicts that the upcoming iPhone 15 Pro range will be equipped with 8GB RAM instead of the current 6GB RAM that Apple has on the iPhone 14 Pro.

This boost in RAM will definitely compliment the new 3nm processor and users should be able to experience performance like never before.

Apart from the upgrade in the RAM on the iPhone 15 Pro range, the research firm expects the iPhone 15 Pro Max to have a Telephoto lens with periscope functionality. This upgrade will allow users to use 10x Optical zoom unlike the current cameras that has a limit of 3x.

Another upgrade that’s possibly going to arrive with the iPhone 15 Pro models is the “8P” design for the upgraded main camera lens. It’s said that the 8P design will promote better camera performance and the extra optical element will help improve the quality of the photos.

Here’s what Mia Huang from TrendForce had to say in the press release,

“In terms of specifications, in addition to the comprehensive switch from lightning to Type C connectors which is already known, chances are high that the Pro series will feature a memory capacity upgrade to 8GB to match its new processor and continue camera specifications improvements including upgrading its main camera to 8P and the use a periscope lens in the Pro Max model.”

As for the modem Apple is planning on using in the iPhone 15 Pro models, reports suggests that Apple will continue using Qualcomm for the 5G modems as Apple’s in-house 5G model is still being developed.

Based on the latest reports, Apple has not been able to pass the mmWave signal test and this has resulted in the delay of its launch.

For now, we can expect to see Apple’s own 5G modem sometime in 2024 or with their next range of iPhone’s post the 15.

On another note, the EU finally passed the law this week, making it mandatory for all electronic devices to have a common changing port before the end of 2024.

Apple has already begun adding USB-C ports to their new range of iPad’s and AirPods Pro and we can expect the same with the iPhone 15 when it gets launched in fall of next year.