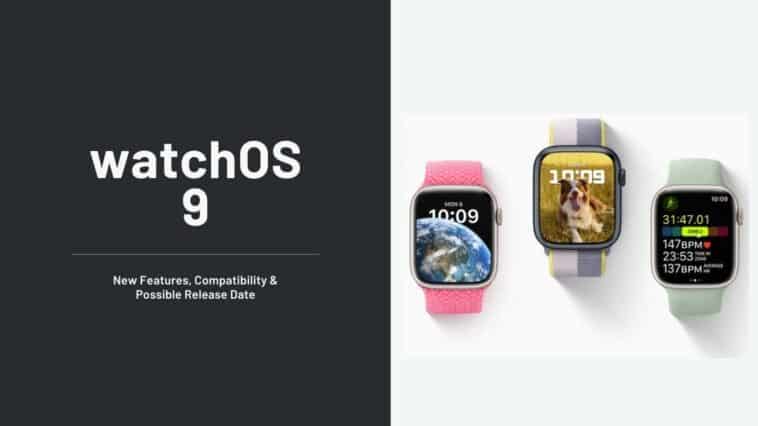 With the launch of watchOS 9 around the corner, there are a number of leaks and reveals online that show the new OS to be quite promising.

It now comes with new running metrics, a built-in medication management tool, an updated sleep tracker and much more.

First revealed in June at the WWDC keynote event, the latest version of the OS, watchOS 9 is still in the beta testing phase, but users can get their hands on the public version by enrolling in Apple’s beta testing program.

So until the big reveal in a couple of weeks, let’s go over what’s coming to watchOS 9 this year and talk about the new features, what devices could possibly run the new watchOS and show you how you can get your hands on a beta version.

watchOS 9 Release Date – Confirmed or Not?

As of writing this, the official release date for watchOS 9 has not been confirmed. But, it should most likely be somewhere at the beginning of September.

Apple is known for their systematic schedules and if we can expect the same as we saw last year, then watchOS 9 could possibly get a global release on the same day Apple launches their Apple Watch 8.

As of now, the launch date for the Watch Series 8 is scheduled for the 7th of September.

So, if all the bugs have been fixed and the OS is good to go then we should see watchOS 9 get released on the same day as the Apple Watch Series 8 and the iPhone 14.

When was the first Beta version released: 11th June 2022

How many Beta versions have been released: 7 Developer, 5 Public

UPDATE (12-Sept-2022) The watchOS 9 update will go live today and users will be able to update their Apple Watch to the new OS within the next 48 hours.

Here’s the release time based on country

watchOS 9 Compatibility – Which Devices will Get watchOS 9

In terms of compatibility, we found that watchOS 9 will not be supported by all devices in the series and while we can confirm that the Series 7 and the Watch SE will receive watchOS 9, it’s apparent that even the Watch Series 4, Series 5 and Series 6 might receive the new OS.

However, the one device that is not compatible with watchOS 9 and which will not receive the annual update is the Watch Series 3.

Though the device is still on sale even today, Apple has decided not to provide an update for this device and users would only be able to run watchOS 8 on the Series 3.

Devices that will receive the new watchOS 9

What Are the New Features Coming to watchOS 9?

At their preview in June, Apple gave a rundown on the things we can expect from the new watchOS 9.

Many of the changes and updates coming to the new OS are directed at making the Apple Watch one of the best fitness and health trackers in the market, not like it already isn’t.

All these features are available to try in the new public beta just in case you’re interested..

Here are some  of our favorite new features coming to watchOS 9.

To start things off, the workout app on the Apple Watch is getting a major upgrade and users will now be able to view a lot more information about their workout sessions simply by rotating the crown.

Another interesting improvement to the workout app that’s also available in the beta version, is the ability to automatically transition between workouts without having to manually select what workout is being performed.

Multisport, as it’s called, tracks any workout mode without much effort and you will also be able to customize their workout and recovery intervals where real-time accurate data will be tracked using the heart rate sensor.

Changes to the Family Setup

The family setup on the Apple Watch will now support kids that have an Apple Watch, but do not have their own iPhone.

The app allows kids to access podcasts and HomePod speakers as well as control smart home appliances such as the lights, TV or fan with the Watch. They will also be able to access their digital home or hotel keys all from within the Apple Watch.

Medication Tracker in the Health App

Next is the Medication tracker that is designed to help users track and monitor their medication intake.

The app will push alerts and reminders at the prescribed interval notifying the wearer about the medication they have to consume.

There are also two new accessibility changes coming to the Apple Watch with watchOS 9. One is where you will be able to double pinch the display to either take a photo or to start a workout.

See also  Are Apple Silicone Cases Bad | Are Apple Cases Worth it in 2022?

These settings can be configured while setting up the new OS when it’s released.

And the second is called the Apple Watch Mirroring where you will be able to mirror your watch face onto an iPhone and then either use assistive features on the iPhone or manually swipe and tap to fully control the Watch.

This feature has been developed to help people with disabilities easily control their Apple Watch from their iPhone. Users will be able to control the watch using voice, head trackin and sound.

Though there has been no update as yet regarding this feature we hope that it gets a quick release, because it’s something we would love to explore.

As we’ve seen earlier with other software updates, Apple tends to release a few watch faces each year. This year we have gotten confirmation that Apple will in fact be releasing multiple watch faces with their watchOS 9.

These faces will be customizable and some of the highly anticipated faces are the Metropolitan, Playtime, Astronomy, Lunar, Modular Compact, Modular and X-Large, and updates to the Portraits watch face.

The new lunar watch face is expected to track the phases of the moon and provide you with either a Chinese, Hebrew or Islamic calendar depending on your selection.

The update to the portraits face includes adding tint and layers to the background of any photo and the modular watch faces can be customized with different colors and gradients.

Calendar App is Getting an Overhaul

The calendar app will also receive a couple of changes with the new update.

Based on some of the tests, you will now be able to add and edit events directly from the watch without having to take out the iPhone.

Though it’s not a lot, the new update makes it a whole lot easier to use the Apple Watch and set reminders or create calendar events in a hurry.

Finally with watchOS 9 we get to see some changes being made to the sleep tracker. The new update should provide us with new information such as deep sleep and REM cycles.

All these details will be presented in a graph which is pretty cool and the same can now be tracked in the health app on the iPhone.

This as well is facing a couple of issues and developers are currently working on getting them fixed.

Improvements to the ECG App

Another swanky new update that’s potentially coming to the watchOS 9 is the inclusion of AFib or the ability to detect arterial fibrillation. This new feature is designed to help patients who have been diagnosed with AFib and can measure irregular heart rhythms which can prove fatal.

AFib History is another new update that shows the wearer their AFib history over a period of time and will estimate the frequency of the arrhythmia’s and it’s also built to calculate how sleep, weight and exercise can affect arterial fibrillation

There are three rumors I came across that look promising, but because they have not been confirmed by Apple, I’m taking them with a pinch of salt.

Glucose Monitoring – While many rumors suggest that the Apple Watch 8 will receive Glucose monitoring, there’s been no confirmation till date.

According to Bloomberg’s Mark Gurman, the Glucose monitoring system will be implemented post 2024 as there are still snags with the ability to monitor increases and drops in your blood sugar.

Core Body Temperature – Though the Apple Watch Series 8 will technically have the right amount of temperature sensors to track your core vitals, the software is not yet advanced enough to deliver accurate results.

Since Apple is a big on perfection, we doubt the new core body temp feature will be released just yet as we haven’t found any sampling in the beta tests.

Crash Detection – Crash detection was rumored for iOS 16, but a report by the Wall Street Journal suggests that watchOS 9 might get the update as well.

If that’s the case then the Apple Watch will be able to automatically signal for help by contacting the medical authorities as soon as you meet with an accident.

Apple has been testing this feature out by collecting data from iPhone and Apple Watch users, s we’re hoping for there to be an update soon.

The watchOS 9 Beta for public testing is live and anyone interested in testing out the software can enroll and download the Beta directly from Apple.To do this, you can follow these steps.

How to Download and Install the Final Version of watchOS 9?

Wait for the update to download and install on the Apple Watch.