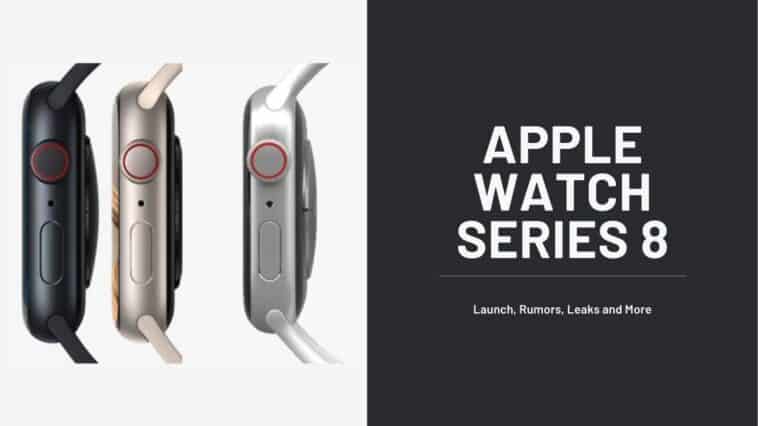 We’re finally a day away from Apple’s 2022 release event and from what we could gather till now, a launch of their new Apple Watch Series 8, alongside the iPhone 14 is definitely going to happen.

Now we are not quite sure exactly what Apple has in store for us with their new Watch, but what I can tell you is that from the chatter online and rumors, that the new Apple Watch Series 8 might just be deemed as one of the most powerful smartwatches that money can buy.

This guide will highlight all the possible changes Apple is making to the Watch 8 including new capabilities, better health features and even some possible patents that Apple has filed for their Watch Series, that we truly hope to see in the upcoming Apple Watch Series 8.

Apple Watch Series 8 – All You Need to Know

Apple is generally quiet about their launch dates, but we expect the launch of the Watch Series 8 to take place on the same day as the iPhone 14 which is the 7th of September 2022 during their Apple ‘Far Out’ virtual event.

We’re going to see the Watch 8 and potential Watch 8 Pro and the SE 2 make their debut on the same day alongside the iPhone 14.

Regarding the shipping date for pre-orders and for when the Series 8 will be available to the general public. Apple tends to stick to their regular launch routine, and it’s possible that the Watch 8 will be available in stores by the following Friday, the 16th of September.

As for the pricing, we expect Apple to retain the current pricing, at least for the base model of the Series 8 and it should be available within the $399 ballpark.

However, with there being possible different variants such as a cellular watch (+$100 over the base price), and a Series 8 Pro with a larger display and better build, we’re expecting the price to vary between $399 – $899 with the latter being the price for the new 8 Pro (the most expensive Apple Watch in the range).

Back in 2020, we heard rumors that Apple might consider changing the design of the Apple Watch to include flatter edges and a flat display.

However, that did not happen with the Watch Series 7. We’ve uncovered a couple of new rumors that suggest Apple might add the flat display to its new Series 8 watch and leave out the flat edges for the time being.

But that has been sadly put to rest by leaker ShrimpApplePro who clarified on Twitter that the Series 8 will not get any design changes and the Watch will feature a similar design as the Series 7.

If this is true then the Watch 8 will be available in 41mm and 45mm dials with only Stainless steel and Aluminum chassis as Apple is apparently discontinuing the regular Titanium version this year.

On the brighter side, the Series 8 might include new color options as well like Starlight and Midnight.

Another notable change is to do with the packaging, Apple is stepping it up a notch and adding a tamper proof seal on the box that will damage the box in case someone tries to open it.

This is a good feature and it should cut down on scammers trying to resell an already used Apple Watch.

In terms of new features and updates we were expecting Apple to include blood glucose sensors in the Series 8 alongside a body temperature sensor.

These would have been a sure game changer for the brand because it would mean that Apple has brought something new to the table and could possibly interest buyers in swapping out their old Apple Watch for the Series 8.

But from the latest update from Gurman, the Watch 8 will not come with any major changes or new sensors and it’s quite possible that we can see these upgrades post 2024.

Whereas, according to Kuo, if Apple is able to get their algorithm to work perfectly, then we can see the Series 8 measuring body temp as well.

We can confirm however, that Apple is experimenting with including high accuracy body temperature sensors in their Watches as per the patent they filed back in 2020.

An update that we can also confirm that’s coming to the Series 8 is the Sleep Apnea Detection here the Watch will use the existing SPo2 sensors to detect sleep apnea.

There’s also a big possibility that the Series 8 will receive a new low powered mode which will grant more use time even if the battery is low. Gurman even hinted at there being major updates to activity tracking on the Watch Series 8, but we haven’t heard more on this.

One of the most promising leaks to come out in the last few weeks is the possibility of there being a larger Apple Watch Series 8, named the 8 Pro or the Rugged Apple Watch.

Based on what Mark Gurman highlighted in one of his newer articles, Apple is currently working on an elite sports version of the Apple Watch and it will feature a 7% larger screen as well as an all metal casing that’s designed to take a beating.

The Watch 8 Pro is rumored to have a 2-inch display and will be marketed to athletes, pro hikers and others who experience harsh environments on a regular basis.

It’s also possible that the Series 8 Pro will be made exclusively of Titanium.

Since it’s going to be a high-end Watch and the largest one Apple has made till date, we’re expecting the Pro to be shipped in limited quantities and according to macrumors, the number would be a million units only.

Could we See an Apple Watch SE 2?

As we saw two years ago, Apple launched a smaller Apple Watch in the market, named the SE. This was a significantly cheaper smartwatch with decent performance and capabilities.

It’s quite possible there might be a SE 2 launch this year alongside the Series 8 and 8 Pro and  that has been confirmed by Mark Gurman from Bloomberg.

Apparently the chipset in the watch would be upgraded to the one used in the Series 6 or 7 and the SE 2 should get an always-on display as per the latest update.

The SE 2 is expected to look identical to the SE with no design changes and we can confirm that it will not come with an ECG reader.

However, there are rumors still floating around that the SE 2 would include a new battery, and new speakers which could see a slight price increase over the SE.

As there are no leaks on the pricing of the expected Watch SE 2, we’re anticipating it to be priced around the same range as the SE at $279. But, if there’s going to be a new battery with better speakers, we can expect the base price to increase to roughly $299.

Now this is a problem because the Watch Series 8 is purported to carry a launch price of $399 and if people to spend $100 on a better model, then the SE 2 might not do so well in the market.

There were rumors floating around that Apple is working on satellite connectivity which will allow users to send emergency messages and SOS messages when there’s no network.

While this is still in the pipeline, there’s no official update from Apple or from Mark Gurman regarding the Series 8 to include satellite connectivity.

Right now this feature is only going to be available to iPhone 14 users and hopefully we should see the same made available to the Apple Watch maybe with next years release or a software update before then.

With there being only a handful of reliable rumors and leaks online, we can do nothing but wait for the official launch.

The Apple Watch 8 will receive the new WatchOS 9 right out of the box and from what we could uncover about the new OS, it looks to be a major shift in what the Apple Watch will be capable of.

Since there’s still not a lot of information on the Watch Series 8, 8 Pro and the SE 2 we can still hope for some changes to the functionality and capabilities to make it the best watch till date.

Stay tuned for more as we keep track of everything related to the new Apple Watch Series 8  up until the release.