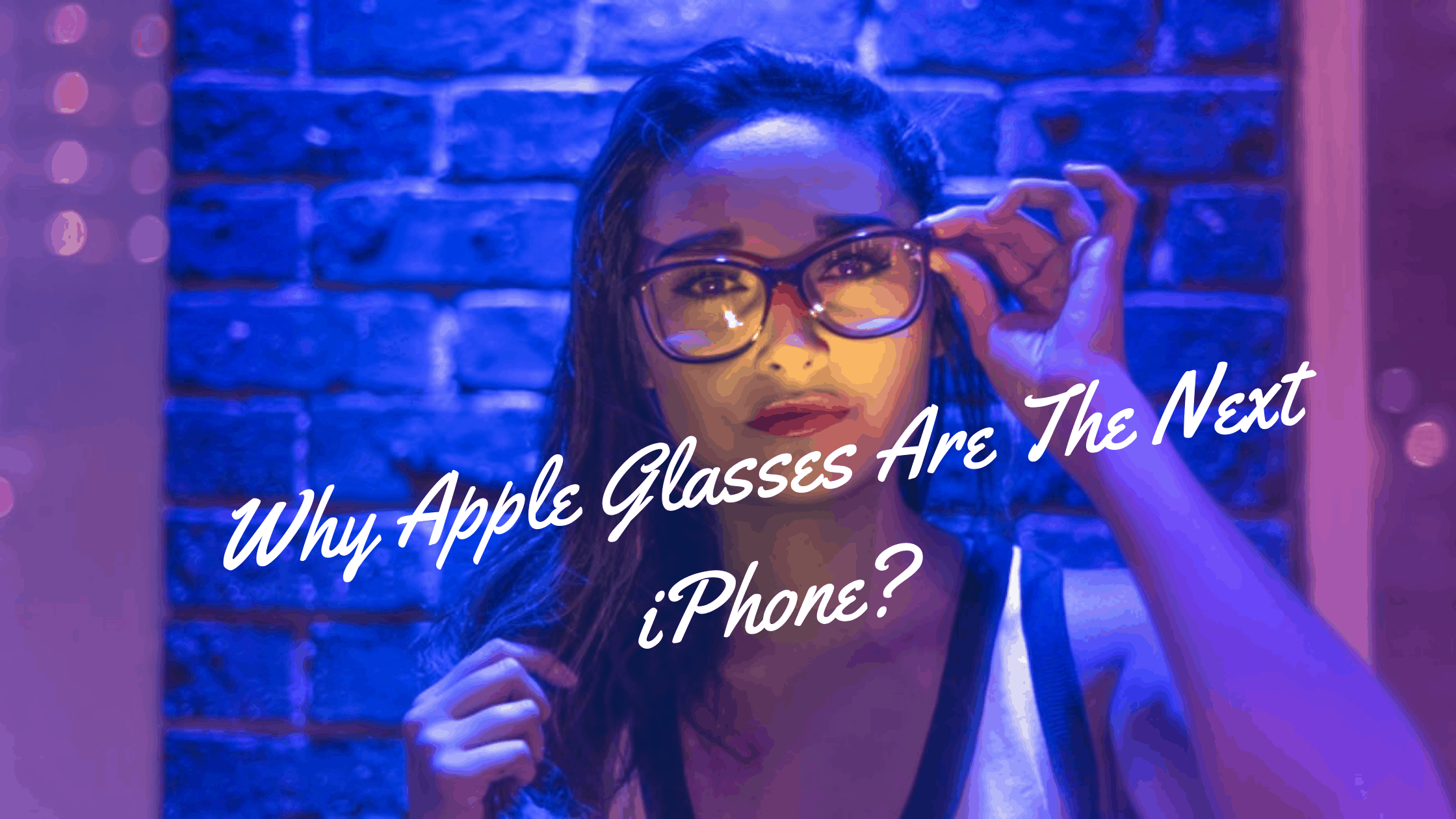 It’s been 17 years since Apple launched the world’s first smartphone and ushered in a new era. Although, the iPhone may not be as impressive as it once was compared to current technology it did revolutionize the way modern humans communicate. And now, almost 1.5 decades it looks Apple is getting ready to once again change the world, this time with the Apple Glasses. Check out our Why Apple Glasses Are The Next iPhone for more details.

Apple glasses are augmented reality (AR) glasses that can display AR generated content in the user’s field of vision. For example, you will see Maps, texts, social media, videos and games superimposed on reality. It’s a must-have gadget that will be equipped with the latest technology.

As a concept, it certainly is revolutionary and It’s with that concept in mind that companies like Apple are looking towards the next big thing, the next technological revolution; in all honesty, the next iPhone.

Apple’s been working on this new technology for years now, but it’s only lately that they’ve started talking about it.  Right now, everything’s up in the air, but thanks to some crucial information confirmed by Apple, Inc. as well as some reliable leaks from the usual suspects, we have a rough idea of what to expect with the Apple Glasses.

So, read on to find out Why Apple Glasses Are The Next iPhone.

After reviewing various official documents and compiling credible rumours on Apple Glasses, my team and I at Stupid Apple Rumours found that:

Apple Glasses are the next iPhone. It is expected to be a revolutionary technology that will change how users communicate as well as perceive the world. With AR technology incorporated into a superimposed world, the user can navigate in real-time, text with their eyes and much more.

Related: Will there be an iPad with Wireless Charging?

Why Apple Glasses Are The Next iPhone

Why Apple Glasses Are The Next iPhone

As mentioned earlier, Apple Glasses are Augmented Reality glasses that are being developed by Apple Inc. If you’re familiar with the concept of Google Glass – which was Google’s attempt at this technology circa 2013.

At least it’s important enough for the company to call it the next iPhone and hope that this product will eventually replace iPhones. And Most importantly, change the world the way the iPhone once did.

Based on reliable industry leaks, we can expect Apple Glass to have the following features:

According to Jon Prosser a famous Apple Leaker, the Apple AR Glasses are going to be able to display information in Augmented Reality on both lenses.

Due to Apple’s commendable consistency with its Pro-Privacy policies, the Apple Glasses reportedly will not have built-in cameras, although that might change in later iterations.

Related: What is Apple’s LiDAR Scanner?

To keep them light and slim enough for everyday use, the first iteration of Apple Glass will likely not have any built-in processing, leaving the heavy-lifting to be done by a paired iPhone.

If you’re wondering how the Apple Glasses will be operated, the latest reports say that the interface will be controlled via gestures using your hands.

According to another leak from Prosser, the Apple Glasses will probably be available with a prescription lens option. Which is an absolute dream and I personally never got used to the Google glasses and I’m extremely myopic, no pun intended.

This feature is currently more rumor than anything else.

Since there is no definitive information regarding the specs. We can only predict the tech that’s going to be incorporated into these futuristic Smart Glasses. Of course, it’s not all speculation as there are rumours and leaks as well to bolster the credibility of these predictions.

According to everyone’s favorite source of Apple leaks, Jon Prosser from Front Page Tech, Apple Glass will be available at a starting price of $499, with the option to pay more for prescription lenses.

Thankfully, under $500 for some cutting edge technology should be within reach for most – especially when compared to Google Glass’s hefty $1,500 price tag.

The release date for the Apple Glasses is a prickly topic – as it always is when it comes to these ground-breaking products where the company has yet to reveal, confirm, or deny any information.

The ones with the best track records for industry and production leaks include Jon Prosser from Front Page Tech, highly-regarded Apple analyst Ming-Chi Kuo, DigiTimes, and Bloomberg.

According to reliable Apple leaker Jon Prosser for Front Page Tech, we can expect Apple to officially unveil their AR Glasses concept sometime in Q1 or Q2 of 2021.

Kuo: Product Launch in 2022 At The Earliest

Ming-Chi Kuo, on the other hand, expects a much later release date of 2022 at the earliest.

DigiTimes, on the other hand, reported recently that they expect Apple Glasses to launch sometime in 2021.

Bloomberg: Launch in 2023 At The Earliest

At the other end of the spectrum, international business news platform Bloomberg reported their release date expectations do be no earlier than 2023 – a full three years from now.

Apple Glasses Review – What We Know So Far

Okay, this is where it gets a little crazy. With all of the leaks and hype revolving around the upcoming Apple Glasses, it’s hard to tell what is reliable, trustworthy information, and what isn’t. Here’s a little timeline where we attempted to present the most reliable information as simply as possible:

Apple has yet to grace the world with details on its exciting upcoming new product, but it’s coming. It’s really happening. Whether or not the Apple Glass will become the next iPhone is something that only time will tell, but one thing’s for sure, it’s going to come in a big way.

Apple files multiple patents long before it launches any products and the best thing is that these patents are public domain. So, literally anybody can take a trip and access these.

Now, one of the most useful aspects about accessing these patents is that, it can give us a clear idea of what the product might eventually look like. It can also give us a decent understanding of the technology and features of the product.

From the patents alone, we could conclude that the consumer electronics giant had been working on Apple Glasses from 2008. Although there have been multiple patents, the latest ones from Apple are the ones that give us a clear idea of what the Apple Glasses will look like.

For example, Apple filed a patent last year is primarily about the potential input methods of the Apple Glasses. It states that the glasses have a specific system that utilizes infrared heat sensing to detect when someone touches an object. This allows the glasses to then project controls onto a real-world surface.

So, this tells us that Apple is looking at a device that can project controls on to tables and other surfaces.

As mentioned earlier, the Apple Glass will primarily be an AR headset and will not feature any type of VR functions. So, you expect features like your notifications and social media among other dedicated apps overlapping on real-time view.

However, it was also rumoured while the Apple Glasses won’t have a VR feature, Apple was creating a dedicated VT headset that could actually hit the market earlier than the Apple glasses.

As for the design, sources claim it’s extremely similar to the popular Occulus Quest but slimmer and outfitted with a fabric of some kind. Of course, the design is still being refined as it was reported the company is still testing out various head shapes.

As for the price, we can only assume and that assumption is that it’s likey not cheap considering the Occulus Quest is somewhere around 400$ and others go all the way up to 4000$.

It is likely to hit the markets in 2022 after a grand unveiling in 2021. This Apple VR headset will primarily cater to gamers with video streaming and of course various applications with Siri.

How much are Apple AR glasses?

According to various sources such as Jon Prosser and Ming-Chi Kuo, the Apple Glass is expected to priced at a starting price of $499. Considering the amount of engineering and cutting edge technology that’s going into this device, it’s honestly a steal.

While we can predict what the design and features of Apple Glasses, it isn’t an absolute. Most importantly, Apple could always change the specs and technology. However, being a die-hard Apple fan, there are certain things that I really do want to see. For example:

Apple Glasses that actually look like real spectacles: After having used Google Glass, Sony SmartEyeglass and other smart eyeglasses, I really hated the fact that none of them wear seamless. All of them stood out and looked like it was out of Minority report. So, I would love to see smart glasses that look like natural eyewear.

Additionally, I would also love to see Artificial Reality in full 3-D and not just as a layer. With a HUD and full 3-D integration, Apple Glasses would be beyond its contemporaries. Moreover, I would really love to see it run all iOS compatible AR apps as well. As this would provide the users with a much broader user experience.

Most importantly, it would be amazing if the Apple glasses could provide the users with a battery life of at least 8-9 hours like the AirPods. Of course, we would love to see a portable charging case as well. After all, it wouldn’t be worth it, if it could last through the major part of a day.