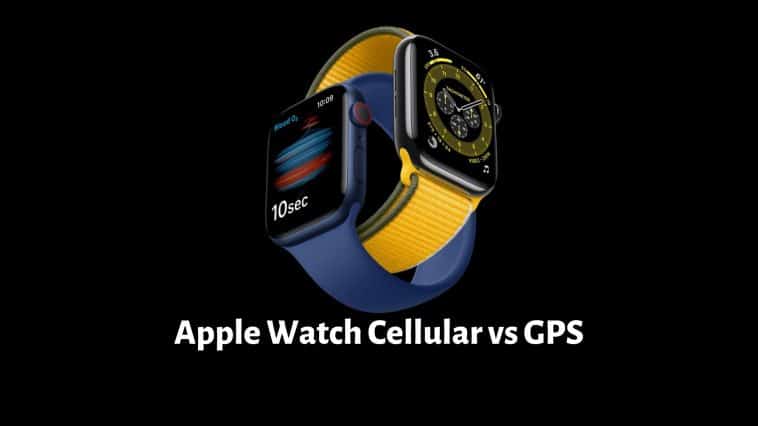 Apple Watches are some of the best if not the best smartwatches you can buy right now. They have everything from a vibrant display to excellent activity tracking along with tons of other features and top-notch build quality.

There’s not much you can ask for more from a watch but Apple Watches still question you on which version you want to choose from, Cellular or GPS only.

Yet it is not so simple either, other factors come into play making the decision a complicated one. But worry not, by the end of this article, you will be sure which version of the Apple Watch you should choose, Cellular or GPS.

So below is a table listing the differences that you experience when using either version of the Apple Watch Series 7.

When it comes to the design there isn’t much of a difference between the GPS and Cellular model of an Apple Watch, but this doesn’t mean there is no difference at all. The only design difference is that there is a red ring around the Digital Crown on the cellular model.

This means there is a difference in the type of screen glass as well. The GPS models only get Ion-X glass displays while the Cellular models have the option to choose between Ion-X and Sapphire Crystal glass displays. Ion-X glass can withstand more impact but is prone to scratching, while Sapphire glass can resist scratches more but can shatter easily, so pick your poison.

Both Cellular and GPS versions of all Apple Watches since the Series 4 require at least an iPhone 6s with iOS 14 for them to function as intended. The Apple Watch Series 3 has been discontinued since September 2020. So in this regard, there is no difference between the GPS and Cellular versions of the Apple Watch. You will need at least iOS 14 running on an iPhone 6s or later to use them.

Apple shares the same band connection technology across all its smartwatches which makes it easy for customers to choose different bands without worrying about compatibility. So, Apple Watch compatible bands will work for both the GPS and the Cellular versions.

Apple Watch Cellular vs GPS: Calling and Other Functions

This allows the Apple Watch Cellular versions to do all the functions that you could do when tethered to your phone, but without being tethered. You can make calls, receive messages, use Siri, navigate via Maps, use third-party apps, and more. You can also make payments using your Apple Watch if it has cellular connectivity.

One thing to keep in mind is that you can only use the same carrier as your iPhone on your Apple Watch as well. Your Apple Watch will be assigned a number but it won’t be the phone number but rather an account assignment number for it.

So this is the biggest advantage of using an Apple Watch Cellular over the GPS version as you can use it to its full potential without being tethered to your iPhone. This means you won’t have to take your iPhone to workouts anymore.

Apple Watches with Cellular support Apple Music and Podcasts app streaming. If you have an Apple Music subscription, then you can enjoy music from anywhere even without your iPhone.

On the other hand, the GPS-only version of Apple Watches doesn’t support Apple Music streaming, but you can still download songs to the Watch and listen to songs off it. The only limitation would be the storage size of the Watch itself.

So, in this segment too, the Apple Watch Cellular is better than the GPS version as it supports both music streaming and offline music play.

Apple’s Family Setup is for members of a family who don’t own an iPhone yet. So if you are planning to get an Apple Watch for a family member who doesn’t have an iPhone, get them an Apple Watch Cellular version as you can set it up using and Family Setup and they can use the watch untethered.

There is a huge advantage for the GPS-only version of an Apple Watch over the Cellular version and that is battery life.

The Apple Watches with Cellular support offers a max of 1.5 hours of talk time while the GPS-only version can’t make calls.

When it comes to workout tracking the Apple Watch Cellular version can stay alive for 5 hours with both GPS and LTE on, while the GPS-only version can do 6 hours with GPS on. Both watches offer up to 10 hours of battery life for indoor workouts without GPS or LTE connectivity.

Get the Cellular version if you don’t want to carry your iPhone everywhere or if you are gifting the watch to someone without an iPhone. Or you can get the GPS-only version for better battery life and similar features for a more affordable price.

Regardless of which version you choose, Apple Watches are excellent products and you will be happy with them. With excellent build quality, gorgeous screen, and tons of features, they are just awesome.

Is Apple Watch Cellular Worth It?

It completely depends on your preference. But to make it easier for you, answer these questions,

If you said yes to 3 or more questions, then you should consider investing in a cellular Apple Watch. If you think you will use the extra functions of the cellular model, then investing in it won’t do any harm (disclaimer: will hurt your wallet).