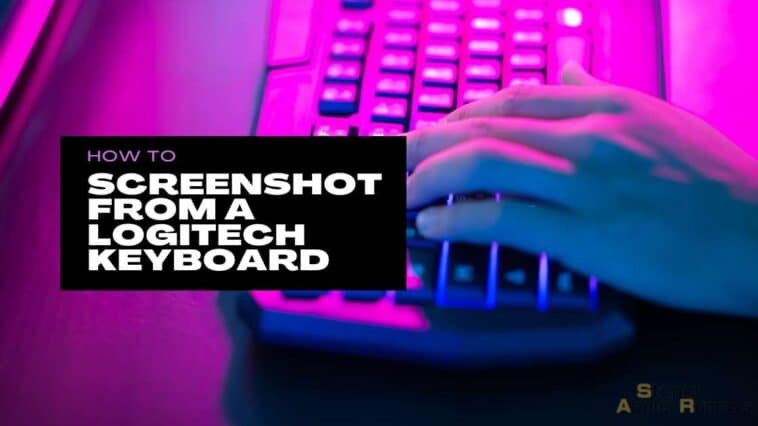 I’ve been using the MX keys with my Mac for a little over 6 months and I must say that Logitech has surely thought about everything when it comes to the functionality of their keyboards on Apple’s OS.

This keyboard has all the necessary function keys to perform shortcuts on any Mac and the best part, it even comes with a designated print screen key to take screenshots.

Well it’s actually quite simple. Mac’s support shortcuts to capture screenshots and since Logitech keyboards are Mac compatible, you can capture your Mac’s screen by simply pressing the Command + Shift + 3 on the keyboard.

There are alternate commands for different kinds of screenshots that you can capture as well as how to remap a Logitech keyboard on a Mac, which I’ll cover in detail below..

How To Screenshot From A Logitech Keyboard

How to Take a Screenshot on a Mac with a Logitech Keyboard?

All Logitech keyboards are Mac compatible and have designated keys that are mapped to macOS shortcuts. You will be able to take a screenshot on your Mac by using shortcut keys in a certain combination.

How to Copy a Screen to the Clipboard using a Logitech Keyboard?

You can easily copy and paste your screenshots onto any other application such as Photoshop or Google Docs instead of directly saving them to your desktop.

To capture your screen and then copy it to your clipboard on a Logitech keyboard, press the Command + Control + Shift + 3 keys at the same time and then paste the screenshot in another app by pressing Command + V on the keyboard.

If you’re copying a section of the screen, press Command + Control + Shift + 4 and then crop the area you want copied. Paste it in an app of your choice by pressing Command + V.

How to Remap a Logitech Keyboard to Support macOS Shortcuts?

In short – yes, you can remap keys on the keyboard, but it’s a two step process.

First you will have to use the Logitech Options app on the Mac with the keyboard connected and then use the built-in keyboard modification tool that’s found in the Settings app on the Mac.

You can use the Logitech Options app to change the shortcut keys on your keyboard and use macOS function keys instead of Windows function keys.

Unchecking the box will permit you to use the Command, Shift and Control keys as standard function keys on your keyboard.

Now that you have disabled the Windows Function keys, proceed to the second step to remap the keys on your Logitech keyboard.

How to Change the Logitech Keyboard Shortcuts to Take a Screenshot?

How to Take a Screenshot on an iPad with a Logitech Keyboard?

Logitech has a number of keyboards available for iPad users and they have been designed to be iPadOS compatible and have designated iPadOS shortcut keys.

See also  How to Delete Multiple Contacts on Your iPhone in 2022 | Solved for the Latest iOS!

Markup lets you modify screenshots and add annotations to the images. You can even add signatures, shapes, magnify the screenshot on the iPad.

How to Customize Screenshot Shortcuts on an  iPad Logitech Keyboard?

To customize your Logitech keyboard shortcuts on an iPad, follow these steps:;

How To Screenshot From A Logitech Keyboard : FAQ’s

Can I use the PrtSc button on my keyboard to take a Screenshot on Mac?

Unfortunately, the PrtSc button can only be used on Windows systems and not Macs or those running on Apple’s OS. You will have to use the Shift + Command + Number keys to take a screenshot on a Mac.

How to take a screenshot with a Logitech K380 keyboard on Mac?

Can I remap a Logitech keyboard for Mac?

Yes, you can remap a Logitech keyboard to support Mac shortcuts and functions. You can do this by either downloading the Logitech Options app or if the keyboard supports macOS, then use the keyboard modifier tool in the System Preferences tool on the Mac.