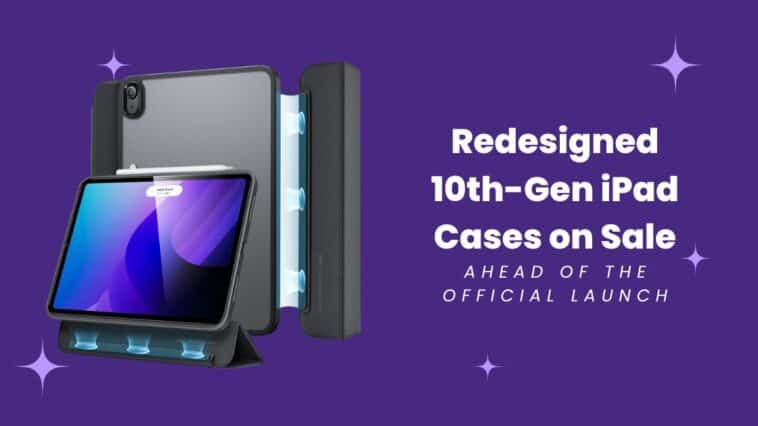 We’re eagerly waiting for Apple to launch their new iPad’s later this month and much to our surprise we’re also getting word that accessory makers in Japan have started selling new 10th gen iPad cases on Amazon, ahead of its official launch.

This can be taken with a pinch of salt, but it does however confirm the fact that there are new products Apple is yet to launch and we can hopefully expect to see more soon.

The iPad 10th gen is rumored to be a slightly larger sibling of the iPad mini 6th gen and runs on the A14 Bionic chip.

The iPad 10th gen is also expected to come with a USB-C port, a top button/touch ID sensor, volume control buttons on the right side, 5G connectivity and a magnetic connector for the Apple Pencil.

Since there are significant design changes made to the rumored 10th gen iPad, the new case that’s listed by ESR will not be compatible with earlier iPad models as they are designed based on the specifications of the new 10th gen iPad.

What Else To Expect?

Since cases for the new iPad’s are already up for sale on some online marketplaces, we can expect to see a few more new products getting released in the coming weeks.

One of the most anticipated releases is the M2 iPad Pro that’s scheduled to release on or before 27th October 2022.

Last month, Mark Gurman from Bloomberg, reported that Apple might not consider hosting another online event and the release of the new iPad range and the new Macs will take place via press release in October.

There’s also a possibility that Apple might launch their new Silicon Mac Pro later this year instead of alongside the iPad and host a special event for its release.