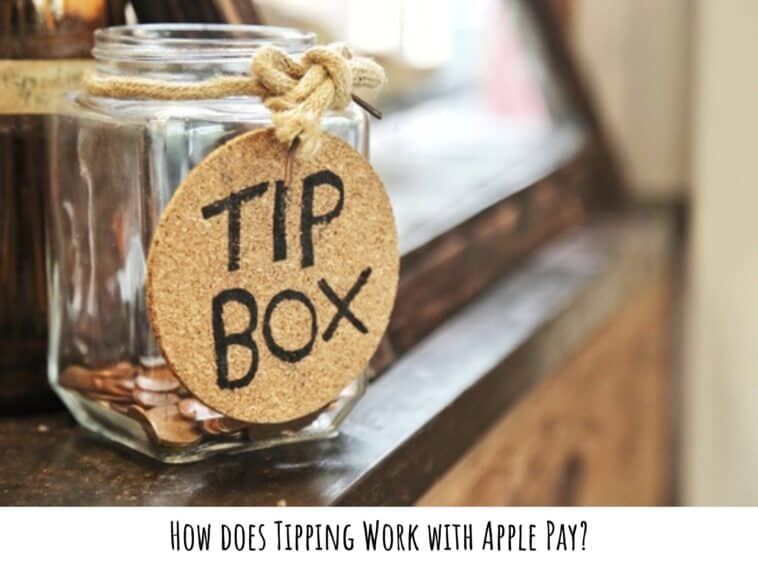 Apple Pay is the most popular online payment service. And this means a lot of users use it for shopping, sending money, and paying at restaurants. One common user complaint when it comes to using  Apple Pay at restaurants is that they don’t know how to tip for the service.

It is actually easy to tip with Apple Pay at restaurants. You can enter tips/gratuity to the point-of-sale terminal when paying for your bill. However, it should be set up by the merchant or restaurant. Learn more about How does Tipping Work with Apple Pay in this article.

How does Tipping Work with Apple Pay?

If accepted by the merchant, tips/gratuity will be entered into the point-of-sale terminal.

According to what I’ve read, tipping will not be an option in Apple Pay at first – so make sure you have some cash. Although in subsequent versions, there may be some kind of conversation window appearing on your iPhone’s screen.

Tip or no tip has no bearing on Apple Pay because Apple Pay is merely another form of payment. If the system is not designed to inquire, it will not ask on your behalf.

A customer had this problem with Apple Card and Tipping,

Hello. I recently used my Apple Card (titanium card) at a restaurant to pay a large group bill. I added the tip when presented with the bill. I don’t see the whole amount listed on my card in my wallet, so does that mean the waiter didn’t receive my tip? (ugh, I hope that isn’t what happened…I’ll never return)

How does this work? Should I have left ‘cash’ for the tip? Any information given will be appreciated.

And the answer to their query is,

The tip will be or should be added. That usually happens in restaurants where I eat. The standard bill is being processed, and when it is, the tip will be added.

Not allowed to tip at a restaurant?

Another incident with regard to Apple Pay and Tipping,

“In Boston, I used the physical Apple Card at a Korean restaurant. When they brought the credit slip, the tip line was pre-filled with $0.00. “Apple card won’t let us modify the tip since too many people have done it,” the server explained (his approximate words – I’m not sure what he meant, but he didn’t speak English well, so perhaps I misheard). This, he claims, is always the case with the Apple Card.

I felt seriously put on the spot because I knew I didn’t have any cash in my wallet, and the waiter didn’t seem too pleased when I mentioned it, even though I was thinking “dude, you’re telling me this always happens — if you know from experience that Apple Card won’t let the customer leave a tip, you should warn me beforehand” — I had several other cards I could have used instead.

Finally, I located a twenty in my pocket; the situation was resolved, but…. Is this anything that Apple Card offers? Is it possible to tip using it in some restaurants? It doesn’t make sense to me, and I’ve never seen it before – sit-down restaurants, which don’t have any clear method to pay with ApplePay, are really the primary location where I use the physical card (usually only at businesses that don’t accept Amex).

This situation made me realize the following.

According to Mastercard’s standards, restaurants are not permitted to accept tip adjustments if a chip/swipe and signature are not used. Because the Apple Card’s chip does not have signature enabled (just “no CVM”), terminals that closely adhere to those criteria could explain what customers are seeing.

However, I believe that many restaurant terminals are set up to conduct signatures regardless of what the chip says, which could explain why it isn’t a bigger issue.

(BTW, if the US bothered with pay at the table, this could all be fixed, but that’s a whole different discussion, and it’s unlikely to happen anytime soon—if ever—due to banks not mandating PIN entry.)

It’s especially strange because there was a tip line on the receipt – and it said 0.00.

This seems awkward all around — I imagine waiters don’t want to say, “I’d prefer not to take this card because you won’t be able to tip me,” or perhaps they are eager to take the card because they prefer a cash tip anyway, but I don’t like being forced to dig out cash (or potentially being caught without), asking for change, and so on.

If this happens frequently, I’ll be hesitant to use my Apple Card at restaurants, much as I’ve ceased using my American Express, despite the fantastic rewards points, unless I know for certain (sticker, sign, etc.) that the establishment takes it. I’m sick of hearing “we don’t take that, sir,” and I just want my transactions to be quick and painless.

While in the past there have been issues with Apple Pay and tipping, that is not the case recently.

According to a new Square survey, customers who used Apple Pay and other NFC payments were more inclined to tip than those who used a conventional credit card.

The findings are based on a six-week investigation of the Portland area and “thousands” of merchants who are employing Square’s new card reader, which accepts both EMV (chip) cards and NFC mobile payments. According to Square, 67 percent of those who swiped a card during that time left a tip.

People were a little more generous with EMV cards (71 percent), but the simplicity of NFC payments resulted in 73 percent of customers leaving a tip.

Square selected Portland because of its intensive use of Square:

Even before #PayFasterPortland, Portland had the highest number of orders for our new contactless and chip reader in the country. And now, the rate of individuals in Portland using mobile wallets like Apple Pay to pay on Square’s new reader is greater than the national average.

“Customers are shocked when they realize how fast mobile payments are. One tap and they’re on their way,” said Morgan Gary, Owner, and Founder of Spin Laundry Lounge. “I definitely see mobile payments taking off. It’s inevitable our society will start to move away from cash.”

And, yes, Square is accepted in many Portland coffee shops. People who use NFC payments most frequently order lattes, followed by espresso and regular coffee.

Despite the fact that it only covers one area, Square’s research provides a decent overview of how NFC payment solutions might help a firm. While there is no follow-up data on why we tipped more when we used NFC to pay for products, less tiredness with the checkout procedure is most certainly one factor.

Square’s NFC card reader was released earlier this year and is readily available in retail places such as the Apple Store or Best Buy, as well as directly through Square.

If you are a business owner then you can invest in the Tip to Jar to receive tips.

How does Tipping Work with Apple Pay – Conclusion

Tipping with Apple Pay is now easier than ever. All you have to do is enter your tip at the point of sale terminal. However, this should be set up by the merchant or restaurant so that the tip reaches the hands of the service provider.

We have explained in detail on How does Tipping Work with Apple Pay, we hope it was helpful.