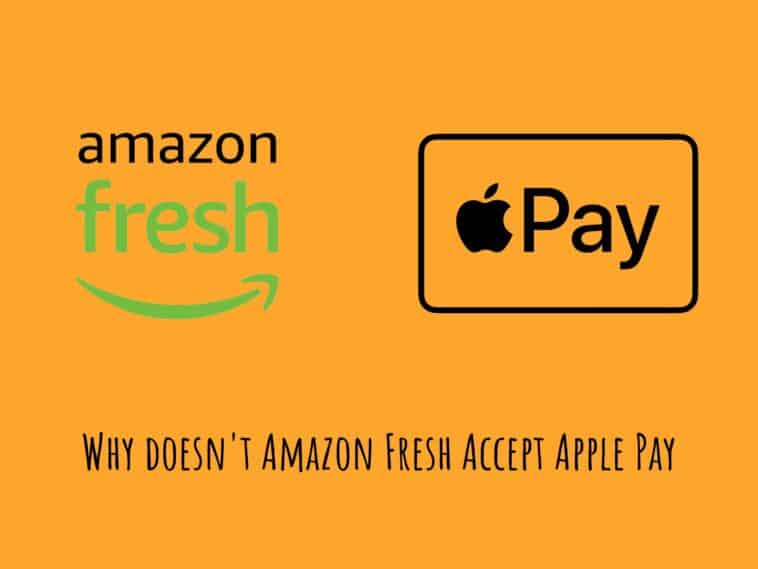 Amazon claims to be America’s most technologically equipped supermarket. They have sophisticated carts with sensors that can detect what you put in them. And when it comes time to pay, they anticipate that you will take out your credit card and place it in a slot similar to 2015.

However, even with all these advances, they don’t support Apple Pay for quick and easy payments. The reason for this is not that Amazon is not capable enough to support Apple Pay, but rather a choice.

Amazon plans to introduce its own payment system and that is the reason why they don’t support Apple Pay or even google Pay and Samsung Pay. There are other reasons as well. I will explain all the reasons Why doesn’t Amazon Fresh Accept Apple Pay in this article.

Related: How to use Apple Cash on Amazon?

You can use your iPhone to make digital payments with Apple Pay. It is a component of the Wallet software, which was created to do away with the need to carry physical debit and credit cards.

Users can input card information from their debit and credit cards into Apple Pay, Google Pay, and Samsung Pay. You can use your iPhone app to make purchases at stores or online rather than digging through your bag for your credit card.

Apple Pay demands that you confirm yourself before you can begin a transaction. To establish your identification, you can use Face ID, a fingerprint reader, or a passcode.

Apple Pay is also simpler to use in stores because all you have to do is put the iPhone close to the NFC payment terminal and wait for the confirmation screen to appear. You must authenticate your identity before the computer takes control of the transaction when you make an online purchase.

No, Amazon Fresh does not accept Apple Pay. There are many reasons for this, you can check them below.

I’m not sure if Amazon’s very distinct idea of how payments and shopping should operate is actually compatible with NFC. For instance, they’re experimenting with palm readers, in addition to the entire “walk out of the store and have your card automatically charged” thing with Amazon Go. I wouldn’t anticipate them using it at all, or not very soon.

In fact, I occasionally wonder if the US simply adopted NFC too slowly to actually get as much traction as it might have, having done so only after the epidemic and everything (and even then, we still have a lot less use than most other Western countries).

Even though it’s late, Apple Pay, Google Pay, and Samsung Pay are rivals to one possible payment option that Amazon would want to introduce in the future.

Given their size, it makes obvious that they would not assist rival businesses; the majority of consumers will simply pull out their cards and input their PINs, and for the few minorities who won’t, Amazon doesn’t really care. For the same reason, Samsung Pay is not compatible with Android and vice versa with iPhones.

Comparatively speaking to, say, brick and mortar food businesses, Amazon doesn’t have competitors. I mean, perhaps some websites perform better for specific things (I trust Chewy’s more than Amazon for cat food), but Apple Pay isn’t really what determines whether I choose Amazon for whatever.

Additionally, who needs Apple Pay when you have Amazon Pay? Walmart Pay operates in a similar manner.

Why does Amazon not take Apple Pay?

The two companies don’t have a clear agreement about Apple’s payment mechanism, you cannot use Apple Pay on Amazon. Amazon cannot take Apple Pay either because it is an Apple competitor. Amazon Pay is the company’s payment option. Customers can use their tablets or smartphones to make payments through a mobile payment system.

Additionally, Apple Pay is well-known for online purchasing because it enables users to pay with their mobile device rather than a real card.

Furthermore, despite not accepting Apple Pay, Amazon doesn’t lose out on many businesses. The annual revenue of Amazon, the largest e-commerce corporation in the world, is roughly $386 billion. Without any kind of association with Apple Pay, it rises yearly.

Mobile payments on Amazon can be made using Apple Cash. Users can use their iPhones or iPads to make purchases at partner businesses without having to carry cash or a wallet.

Additionally, they want to safeguard their clients from hackers. If you use Apple Pay to make purchases and someone gains access to your account, they can see all of your purchases and sell the goods on the black market.

Can You Use Apple Cards On Amazon?

Although Apple Pay isn’t available on Amazon, Apple Cards can be used to make payments.

Apple Cards, the tech giant’s signature credit card, was unveiled in August 2019 and were primarily created for use with Apple Pay on iPhones and Apple Watches.

Apple Cards are accepted by businesses that accept Mastercard, including Amazon, as a result of Apple’s usage of the Mastercard payment processing network.

Just as you would when buying with other credit cards on Amazon, all you have to do is enter your Apple Card information.

You can add a new payment option by going to your accounts and entering your Apple Card number, expiration date, and security code when prompted.

The next best thing to Apple Pay is available when you save your Apple Card as a payment option on your Amazon account.

You can shop on Amazon.com or the Amazon app and pay with an Apple Card or another credit card with just one click thanks to remembered payment settings.

Even if Amazon does not exclusively accept Apple Pay, the shop still wants to make it simple for millions of people to pay every day. That convenience is something that Apple payment methods are renowned for.

How to Use Apple Card on Amazon on an iPhone

Unfortunately, unlike other buying websites, Amazon does not smoothly integrate Apple Pay into its checkout process.

You can enter your card information just like you would for any other credit or debit card if you have an Apple Card, though. Finding your Apple Card number and pasting it into the Amazon entry area are the first two steps in this process.

For future checkout possibilities, you can add a card right away to your account. You can also do so after the conclusion of the online checkout procedure.

Cards can be used in your Amazon digital wallet, but first they must be accepted as a form of payment. To add your Apple Card as a payment option on Amazon:

Step 2 Tap the account icon at the bottom of the screen.

Step 5 In the Wallet tab, tap +Add (it’s small text to the right of Cards & accounts).

See also  How does Tipping Work with Apple Pay in 2022

Step 7 Enter your card information (if you don’t know your Apple Card number, open Wallet, tap the credit card icon in the upper right, copy the number, then return to the Amazon app and paste it in).

Step 8 Once you’ve added the info, you can check the box next to Set as Default Payment method if you want to automatically use your Apple Card every time.

Step 9 Tap Save. You will see a message that the payment method was successfully added.

Step 10 Next time you are checking out while ordering from Amazon if you set your Apple Card as the default payment method, it will automatically bill that card. If you didn’t set your card as the default, tap Payment Information.

Step 11 Select your Apple Card and then tap Continue.

Learn where to use Apple Pay

Apple Pay is available at stores, within apps, on the web in Safari, for some forms of public transportation in certain nations and areas, and in Message Apple.

Anywhere you see one of these symbols, use Apple Pay. To find local businesses that accept Apple Pay, you can also search for Apple Pay in Maps.

Use Apple Pay whenever you see one of these symbols in the mainland of China.

In Japan, use Apple Pay wherever you see one of these symbols.

You may send and receive money with friends and family in the US with Apple Pay. Additionally, you can use Message Apple on your iPhone, iPad, or iPod touch to send money to affiliated companies.

Within apps and online in Safari

So, the primary reason why Amazon Fresh doesn’t Accept Apple Pay is that Amazon wants to introduce Amazon Pay, its own online payment service. This is why Amazon doesn’t support Apple Pay, Google Pay, and Samsung Pay too.

We hope this guide on Why doesn’t Amazon Fresh Accept Apple Pay was helpful.