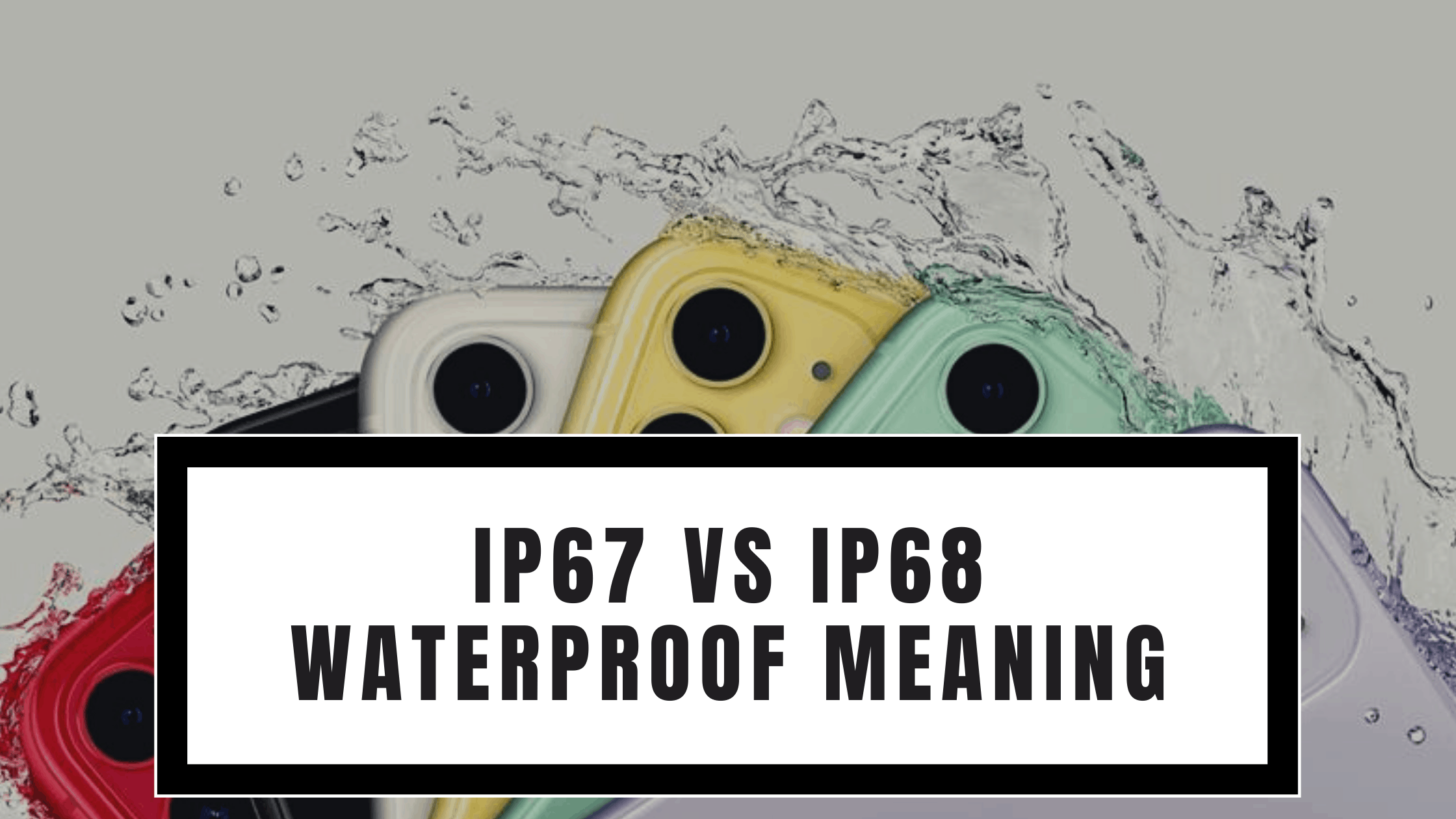 Don’t know if your iPhone is waterproof or not? Confused between IP67 and IP68 ratings? Get all the answers in our IP67 vs IP68 Waterproof Meaning guide.

I have a confession to make, I, unfortunately, treat my phone like crap, even though I’m an Apple fanboy. It’s not that I am careless with it, it’s just that I have butterfingers. And I’ve lost quite a few iPhones to water and other types of damage.

Back in the day when Apple announced that the iPhone 7 would have an IP67 Rating water-resistant, I was extremely excited. Check out our “IP67 vs IP68 Waterproof Meaning?” guide for all the details.

This IP rating/waterproof was a feature Apple was lacking for a while even though the majority of the competition had it. iPhones becoming water-resistant was sweet news for me. It meant one less thing to worry about.

Every generation since iPhone 7 has been IP rated, at least IP67-rated. But then since the iPhone XS, all iPhones are IP68 rated. Even, the latest iPhone 12 and the upcoming iPhone 13 is IP68 rated.

This got me wondering what the difference was and if a choice was offered which one, I should choose. Here’s our “IP67 vs IP68 Waterproof Meaning?” guide for all the details.

After having gone through Apple’s official documents, my team and I found that:

What is an IP rating?

An IP rating is rather common in the smartphone and smart wearable space. IP is the abbreviation of Ingress Protection ratings. It is given to products/devices when they meet certain criteria of dust and water resistance. The ratings and standards are set by Ingress Protection (IP) Code under the IEC Standard 60529.

For a product to obtain an IP rating, it should be submitted to the IP Code for inspection. This comes at a price and most manufacturers skimp on it. Apple pays for its devices to be inspected and in turn, gets them officially rated by the IP Code under IEC Standard 60529.

The majority of Chinese smartphone manufacturers are not paying for classification to keep their costs down. That said, Apple’s latest iPhone 13 will carry an IP rating. An IP rating in general is more common among top-end models.

While IP67 and IP68 are more common among smartphones, you do see them among high-end Smart Wearables. However, common smartwatches and earbuds usually tend to stick to the lower, IPX4 or IPX7 rating that guards against sweat and water splashes.

The main difference between IP67 and IP68 ratings is,

IP67 can be submerged underwater for 30 minutes at a depth of 1 meter.

IP68 can be submerged underwater for more than a meter and more than 30 minutes. So it is important to check what the manufacturer says. However, for iPhones, IP68 usually rates them for 30 minutes of submersion at up to 1.5 meters.

The IP67 rating is given to a device that is protected totally from dust. And an IP67-rated device should also survive for up to 30 minutes when immersed in water for up to 1-meter depth. Apple iPhone series 7, 8, and X are all IP67-rated.

The IP68 rating is given to a device that is protected totally from dust. And an IP68-rated device should also survive when immersed in water for more than 1 meter in depth (the manufacturer should specify the exact depth). The device should be hermetically sealed but manufacturers have to specify the duration and depth it can be underwater. Apple iPhone series XS, 11, and 12 are all IP68 rated.

IP ratings have 2 numbers that provide detail into how water-resistant or dust-resistant a device is. For example, all phones in the iPhone 12 lineup are rated IP68.

So, if your iPhone is rated IP68, it means that it is protected from contact with harmful dust and from immersion in water of depths greater than 1 meter (the manufacturer must specify the exact depth).

See also  Which iCloud Storage Plan Should You Get in 2022?

Since IP ratings protect a device from solids (dust) and water, let’s look at the protection IP67 and IP68 offered by Apple devices.

This is where devices rated with IP67 and IP68 differ in terms of protection. This is because they have different second digits. IP67-rated devices are a step down from IP68 devices in this regard. Both ratings offer some protection to the devices but IP68 is better.

IP67 offers protection of the device from immersion in water of up to 1 meter for up to 30 minutes.

IP68 offers protection of the device from immersion in water of more than 1 meter (exact depth should be specified by the manufacturer) for up to 30 minutes.

It is also important to understand that the IP rating is only applicable to freshwater. The committee behind the IP rating, the International Electrotechnical Commission, has stated that if the IP-rated device is submerged in any other liquid other than water, it can have a varied effect. So, the users cannot expect the same level of protection the device has with respect to water.

So, you should think twice before submerging it in sodas, coffee, or beers. From our tests, we’ve found that coffee is the worst while soda and beer leave it slightly sticky. So, If you’ve submerged it in a pitcher, you don’t have to freak out if it’s been under 5 minutes.

But can you swim with an IP67 or an IP68 device? Not really. As mentioned earlier the IEC stated that the IP rating is given to a device based on its resistance to freshwater. Moreover, it is also tested in a lab with clinical conditions.

So, not only does it not have the jagged stones of a river but it also will not have the chemicals of a swimming pool or the saltwater of a sea. As all of these things can damage the phone, it’s not a good idea to swim with your phone.

What are the Similarities between IP67 and IP68

Let’s look at some similarities between IP67 and IP68. You should also know the difference between waterproof and water-resistant. Waterproof is being able to keep water out of the product/device no matter how long they are submerged in water.

Apple doesn’t recommend taking the phone underwater, or into a shower even though it should survive. Damage from liquids is not covered under the warranty provided by Apple.

It is now clear which one you should personally choose, always IP68 over IP67. If for some reason Apple releases two versions of the same iPhone with IP67 and IP68 water ratings, choose the IP68-rated phone blindly because it is better.

But this will never happen, because Apple knows IP68 is better, and water resistance will only get better for iPhones from now on.

Other Apple Devices with IP ratings

Apple AirPods also have an IP rating, they rated IPX4. This makes the AirPods pro slightly water-resistant, it is protected from water splashes and it may or may not be dust resistant.

What is ATM Rating

If you own a watch then you might have heard about the ATM rating system. ATM stands for Atmospheres and it is a rating system that indicates how much atmospheric pressure a device can withstand.

When you go underwater the pressure increases, and IP ratings don’t tell you that. That is why devices that going to submerged deep underwater like watches are rated with ATM.

ATM is an older water resistance rating system, but it is still in use. Here is what the ATM rating system looks like,

What is Military Standard Certification

You might have heard about another safety standard for devices known as Military certifications. These are devices that are built to last in extreme conditions so that they can be taken to remote workplaces.

MIL-STD-810G puts devices through 29 tests to see if they can handle extreme conditions. These tests include exposure to shock, vibration, heat, cold, humidity, and more. There is a new MIL-STD-810H certification that does up to 30 tests.

MIL-STD-certified devices are great if you are on the move to harsh environments.

This is easy, IP68 is better than IP67 but only by a little. IP68 is the ultimate IP rating a device or product can get.
IP68 means the product can be submerged in water for 30 minutes at a depth of at least 1.5 meters. Some products with an IP68 rating can be submerged for longer and deeper.
On the other hand, IP67 products can be submerged underwater for up to 30 minutes at a max depth of 1 meter. So, IP68 can be slightly or significantly better than IP67 depending on the device. Note that, Apple and most manufacturers don’t cover water damage under warranty.

Yes, but it can depend on the product. For example, watches and smartwatches are designed to be used while swimming, while it is not advisable to swim with your smartphone even though it can be fully submerged in water. You can swim with IP68 devices but is not recommended to swim with smartphones. Note that, Apple and most manufacturers don’t cover water damage under warranty.

IP67 is fully waterproof as you can submerge the device or product completely in water. But there are limitations to the IP67 rating. You can only submerge the product up to 1 meter and for 30 minutes max. Beyond these, there is a chance that the product can be damaged by water. Note that, Apple and most manufacturers don’t cover water damage under warranty.

Can I shower with IP68 waterproof?