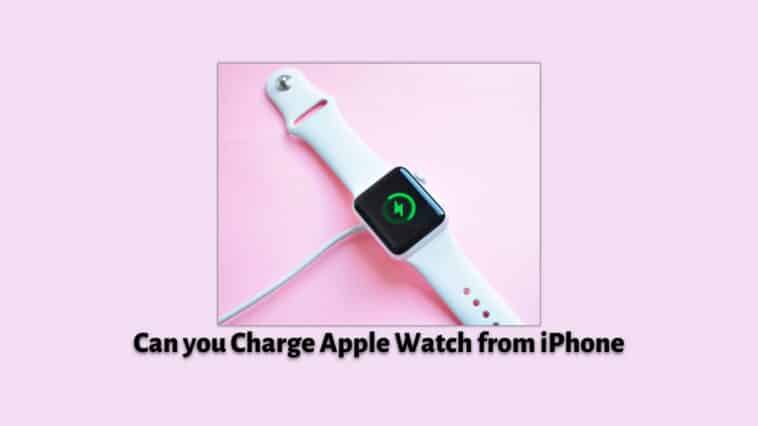 Want to know if there is a way to charge your Apple Watch using your iPhone? This guide on can you charge Apple Watch from iPhone will provide you with the answer to that question.

The Apple Watch is an excellent wearable device. It has a clean design, tons of features, and good build quality. Even though it has many strengths, I consider its battery to be a weakness, especially when compared to the competition.

The Apple Watch’s battery life is average as it only offers a day of use, this means you have to chare it daily. And sometimes it can run low on charge before the end of the day and in such cases, you might want to quickly charge it up.

Since you always have your iPhone with you, wouldn’t it be awesome to charge your Apple Watch using it? While some Android smartphones allow you to charge other devices, let’s see if you can do it with an iPhone. This article on can you charge Apple Watch from iPhone will give you answers to that.

Related: How to Charge Apple Watch Without its Dedicated Charger

Can you Charge Apple Watch from iPhone

So an Apple Watch needs to be in contract with a magnetic charging pad for it to charge. This means that there are two ways the iPhone can be used to charge your Apple Watch, by either the lightning port or by the MagSafe wireless charging technology on its back.

So can you charge Apple Watch from iPhone? Learn about it in the next section.

Can you Charge Apple Watch from iPhone

While this seems like a cool feature it is not available yet, you cant charge your Apple Watch using an iPhone. The Apple Watch’s charger can be powered even by laptops and power banks, but the iPhone doesn’t have reverse charging capabilities that can charge an Apple Watch yet.

Even though this feature is not available for now, there have been speculations that iPhones might get reverse charging capabilities soon. The technology has been available for Apple since iPhone 12 can reverse charge some MagSafe accessories. Apple for some reason has not made it possible for AirPods or Apple Watch’s to be charged using iPhone.

Since the technology is in place, even a software update might be enough for Apple to allow reverse charging from iPhone to Apple Watch. But for now, all we can do is wait and watch.

How to charge an Apple Watch without its dedicated charger

This technology is similar to wired charging, as the current flows through the back of your Apple Watch. But with the newer Apple Watches, Apple added support for Qi wireless charging to them. This means that Apple Watch should be able to charge with most wireless chargers.

Now that you know how an Apple Watch gets charged using the dedicated charger, let’s see if you can charge without it.

You can charge an Apple Watch without its dedicated charger by using a third-party Apple Watch Charger.

There are tons of third-party Apple Watch chargers that you can find on Amazon, other online stores, and even in offline stores. You can use these to charge your Apple Watch.

They use the same magnetic charging technology and come in different shapes and sizes. Some chargers are as small as a USB drive, making them easy and convenient to carry around.

If you are looking for a new Apple Watch charger then, I would suggest getting something like the Anker Portable Magnetic Charger.

It is better than the dedicated charger since it doesn’t use a cable and it is from a reputable brand. Here are some other good third party Apple Watch chargers

Another way you can charge your Apple Watch without using its dedicated charge is by using the hidden charging port. This method was only possible with the Apple Watch Series 1.

When the first Apple Watch was released, people noticed a six-pin port hidden at one end of the Apple Watch where you attach the bands. This port was present on the Apple Watch for diagnostic purposes. The port allowed technicians to configure settings and software easily.

As soon as people found out about the port, they investigated and found out that it can be used for charging the Apple Watch. But since it was a port unlike any other, people had to develop new methods to use it.

Reverse Strap was a company that designed a strap that could attach to your Apple Watch and charge it at the same time. The company also claimed to offer 6-7% faster charging speeds. But Apple had to nip the project in the bud because of safety reasons.

And finally, the last method to charge your Apple Watch without its dedicated charger is to use a charging dock. You can read more about this in the next section.

How to charge Apple Watch and iPhone at the same time

These come in different shapes and sizes, with some looking like a mat and some are stands, so you can pick and choose from what you fancy.

The GEEKERA 3 in 1 Wireless Charger Dock Station is one of my favorite charging docks.

It can charge iPhone, Apple Watch, and AirPods at the same time making it versatile. It also looks simple making it a good nightstand charger.

SO if you want to charge both your Apple Watch and iPhone simultaneously then get a charging dock. Even the MagSafe Duo is a good option for this purpose from Apple themselves.

Can I charge my Apple Watch with any adaptor?

From my experience, I was able to charge the Apple Watch with all the adaptors I used. The only thing you need to keep in mind is if the charging adaptor has a USB-C or USB-A port. You can get the Apple Watch charger with either a USB-A or USB-C connector.

The USB-C variant features fast charging support for Series 7. To get the fastest charging speeds, you will need the adaptor to support at least 5W of power delivery.

Can you charge Apple Watch from iPhone? At the moment the answer to that question is no. But with reverse charging becoming popular amongst high-end smartphones, sooner or later Apple will make it a feature too.

I hope that sooner or later, Apple allows for charging an Apple Watch from iPhone, this will be a feature that many will use especially people with iPhone Pro Max models that can take advantage of the larger batteries in them.

How to Delete Messages on Apple Watch

How to Clean Apple Watch Band

A hardcore Apple fan with a collection of