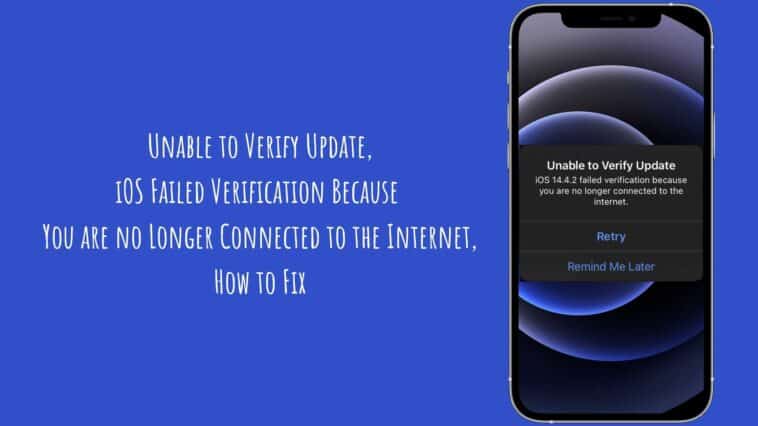 Apple users always want to take advantage of the new iOS releases that come with added functionalities, bug fixes, and security updates. Updating the iOS on your Apple device is a simple thing you can do on your own easily.

While trying to update iOS on their iPhones, iPads, and iPods, many users encounter the error message, “Unable to verify update. iOS 16/15/14/13 failed verification because you are no longer connected to the internet.”

The error message implies that the update process is not able to reach the server for verification due to a lack of internet access. In fact, a lot of users run into this update issue even when their devices are connected to the Internet. Also, the problem appears to be exclusive to wireless updates.

Luckily, there are a few easy ways to solve this issue and run the iOS update successfully. I have prepared this guide to help you solve this most common iOS update issue on Apple devices.

Related: How to Fix An Update is Required to Use Cellular Data on this iPhone

Unable to Verify Update, iOS Failed Verification Because You are no Longer Connected to the Internet

iOS is the exclusive operating system meant for Apple devices. In many ways, Apple ensures the user friendliness of its iOS. However, if something goes wrong about it on your phone, diagnosing the cause can feel like a nightmare.

One of the popular queries raised on Apple discussion forums is about the error message, “Unable to verify update iOS failed verification because you are no longer connected to the internet.”

There are three parts to approaching this topic. First, you must figure out the possible reason why you are unable to verify the iOS update. Secondly, do some basic checks before trying the fixes for the update verification failed issue. Thirdly, try the fixes I have given in this guide one by one till the problem is solved and the device is successfully updated to the iOS version you want to try.

Reasons why the iOS update verification has failed

There may be several reasons why you are unable to verify the iOS update. I am listing a few most common reasons.

The basic checks given above will help eliminate some of the most common reasons why an iOS update does not come through successfully. If the issue persists still, you can explore the following fixes one by one till you successfully update your iOS to the desired version.

When you are unsure about why the iOS update failed, this is possibly a good place to get started. Just follow the onscreen instructions and then click on the ‘Retry’ option. When an iOS update fails, your Apple device will automatically recommend you some solutions you can try to fix the issue.

Therefore, it is worth trying these solutions. It is highly possible that they contain a viable way to get out of the problem and update the iOS of your device without much hassle.

The second solution I want to suggest is to force restart your iPhone if you find your device stuck on updating to the iOS version you want. How to do this will differ with different iPhone models.

For iPhone 8/X/11/12/13/14, long press and release the Volume Up button and Volume Down button. Long press the Power button until the Apple logo appears.

For iPhone 7/7 Plus, long press the Power and Volume Down buttons together until you see the Apple logo on the screen.

For iPhone 6 and versions below, long press the Power button and Home buttons simultaneously until you see the Apple logo appear on the screen.

These methods will force restart your iPhone. Probably, you will see the issue solved by trying this trick.

Tap on the Network Settings icon on your device. Reset your connection by following the steps you find on the screen. This process will require you to type in your Wi-Fi password.

See also  How To Check If Your AirPods Are Authentic 2022

While this can be a viable solution to the iOS update failed issue, often just connecting and reconnecting your device may get the system back to its optimum performance so that the issue of ‘unable to verify update iOS failed verification’ is solved easily.

Quite a lot of users face the “update iOS failed verification” error message while trying to install the iOS update on a VPN. If you guess this to be the reason in your case, turn off your Proxy Connection or VPN. Probably, this fix may see you get connected with the iOS without trouble and verify your update.

Know that trying to perform the update on a VPN or Proxy Connection will invariably fail. Therefore, this is the easiest way to update your iOS if you happen to face this error message.

On your iPhone, go to Settings > VPN, and turn it off

Once you do this, check if this solution solves the issue.

Check the status of Apple Servers

One another common reason why iOS update verification fails is due to some breakdown in the Apple Server. To rule out this reason, perform a web search for Apple Server Status. On Apple’s official website, you can quickly discover if things are fine with the server.

If there are any server problems causing the failed iOS update verification, you just have to wait till the Server gets back to normal.

If none of the fixes above have helped solve the ‘verify the iOS update error’ issue successfully, delete the update and download it once again. Follow the steps below to do this.

Go to Settings > General > Storage. Locate the app on the list.

Click on the iOS update and select Delete Update.

Then go to Settings > General > Software Update. Download the update freshly once again.

Free up the storage on your iPhone

If your iPhone storage is overloaded with data, it is possible that the device does not have enough space available to successfully run the update process. Clear the iPhone storage by removing unwanted photos, videos, apps, and other files that you do not need. This will free up the storage a bit and support the iOS update and verification process in a better way.

On your iPhone, go to Settings > General > iPhone Storage.

Here you can view how much free space is available. If there is not enough space, follow the step below to delete the data or app you may want to get rid of.

On iPhone Storage, select the data you want to delete and click on the Delete icon to free up the storage on your device.

Now check if you can try verifying the update.

Check your iPhone’s date and time

To be able to verify the iOS update, it is important that the Date & Time settings are correct on your device. If it does not follow the regional time and date, it can impact the normal operation of your iPhone.

Restart your iPhone after that and try to verify the iOS update once again.

Try to update your iPhone with iTunes

Moving so far with these fixes, if the issue is not fixed, try to run the update using iTunes, Apple’s official desktop app. Probably, this can help fix the issue. Follow the simple steps below to do this.

Connect your iPhone that needs an iOS update to the computer. Boot up iTunes.

Click on the Device icon you will find in the top left corner of iTunes and choose the iPhone you have connected.

If your device needs an iOS update, iTunes will diagnose it and will install it for you.

However, while trying this method, you must remember that you may encounter some unknown iTunes errors. Also, the time taken for the update can be much longer in this case.

For a more definitive repair solution for being unable to verify the update issue, try WooTechy iPhixer. As an effective alternative to iTunes, this tool can automatically fix the software bugs that may be causing the error “unable to verify update iOS”

This tool also lets you update your iPhone to any iOS version you want without getting stuck. This versatile software can successfully accomplish the iOS update without any errors. It is highly depended on for its privacy protection capabilities.

This tool supports updating iOS on any iPhone model and can support even the latest version of iOS.

One big advantage of using this tool is that you do not have to connect your iPhone to the internet and hence the iOS failed verification error is fundamentally ruled out. The biggest benefit of using this tool for iOS updates is that this tool supports enter/exit recovery mode totally free of cost.

Unable to Verify Update, iOS Failed Verification Because You are no Longer Connected to the Internet – Take Away

Apple phones and their iOS versions have been carefully designed and developed to give an amazing performance to users. While trying to take advantage of the developments in your device’s operating system, you must migrate your iPhone to the latest iOS by attempting an update.

“Unable to verify updates iOS failed verification because you are no longer connected to the internet” is a common problem reported by several iPhone users. Keep the fixes I have listed ready in hand to solve this issue if you happen to encounter this error while trying an update.