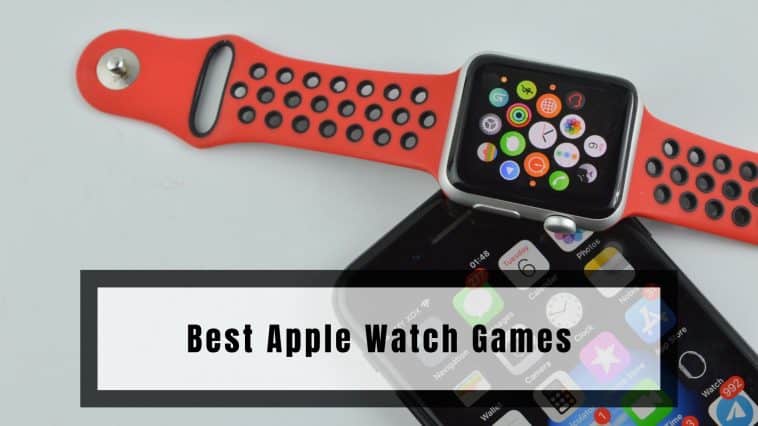 If you’re stuck in a long meeting with nothing to do, here’s one thing you can do — play games on your watch. Yes, we’ve come that far. While the smartwatches capable of playing games have previously been ridiculously expensive, Apple has made sure it isn’t anymore. Check out our list of the Best Apple Watch Games for all the details.

A few years ago, who’d have thought you could play games on your wrist. Now, it’s as you’re confused between what game to play because there are just so many!

You’d think a small screen and one-hand operation would limit someone, but not Apple game developers. Now, it might not have the complexity of a phone or PC game, but they’re designed for limited immersion and entertainment on the go! Here’s our list of the Best Apple Watch Games.

After reviewing 50 Apple watch games based on various factors like popularity, gameplay, graphics, and price, my team and I zeroed in on 10 that really stood out. These 10 were further put through tests to determine the best. We found that:

The best Apple watch game is Pocket Bandit. This game makes used of the dial of your Apple watch to break into fictional safes and vaults. This unique method coupled with the stellar graphics makes this one of the best games. Most importantly, it’s extremely affordable at $0.99.

Related: What can you do with an Apple Watch Series 5?

Apple seemed to take it literally when someone said the world is in your hands—you have the key to entertainment, brainteasers, arcade games, puzzles, and so much more. All on your wrist! Keep reading to find some of the best games on the Apple watch.

If you could pull a jewel heist without breaking any rules or without even moving an inch, wouldn’t you? Well, next time you’re waiting at the doctor’s office, break into some vaults protected by anti-theft devices to steal money and jewels.

It is through the crown of your Apple watch that you break the safe. Carefully noticing and feeling the vibrations as you rotate the crown to crack the code. The watch has made use of the haptic feedback to help identify when you’re close to cracking the code, after which you tap on the screen and do it all over again.

The quick in-and-out game has over 100 combinations for you to break. Each level is time-sensitive. Stay sharp and stay out of trouble!

This game is built to take advantage of the Digital Crown and built for the watch. Twisty Color is developed with a simple concept in mind: different colored balls will be shot into the center of the screen towards the center. All you have to do is use the watch crown to rotate the twister to match the color of the colored balls.

As uncomplicated as it sounds, it can be quite challenging. The crown can move too quickly. Only with practice can you master the game. Twisty Color starts with three lives. Each time you mismatch the color, you lose a life.

This game captures the spirit of both turn-based strategy games and board games into a minimalistic masterpiece. Tiny Armies is perfect if you are looking for a time-waster embodied in light strategy. I have spent a surprising amount of time sending my blue squares flying into trees, mountains, rivers, and enemy soldiers.

Multiplayer is even more fun. You can spend a surprising amount of time sending your blue squares flying into trees, mountains, rivers, and enemy soldiers.

The game has four difficulty levels with seven stages in each of them. The Skirmish mode of the game is a kind of survival of the fittest where you’re in a fog of war. The tiles remain concealed and veiled until later. In the Versus mode, you can play it like a local multiplayer game and chat via iMessage.

A single game hardly takes a minute, making it perfect for short play sessions. Some may call it a distraction, some may call it a challenge. One thing’s for sure—you’ll need some moves up your sleeve to beat red!

If you’ve got a few free minutes and are seeking to improve your general knowledge, this is the game for you. Show off your wits to the world or your friends by playing against them. Simply open the game on your watch and spin the wheel. You now have access to a multitude of trivia questions that’s not only entertaining but also educative in a friendly manner.

In this trivial Pursuit-style game, you get to play with random people around the world while pursuing to collect all six game characters, each representing a different category.

The many categories include history, geography, entertainment, sports, art, and science. The game has a ticking timer that adds a sense of urgency and makes it even more challenging!

You’d think Letter Zap is just another word game where you need to unscramble the letters to uncover as many words as you can. But, here’s the challenge. The game uses a heart rate sensor that requires you to do all of that in 30 seconds while keeping your heartbeat under control. This kind of innovation is what sets t apart from all other word games.

If you’re not a fan of such frantic-fun, you can always play the zen mode, but that may require you to make some in-app purchases. In total, there are four game modes:  4 different game modes: Stars, Classic, Half, and Zen. There’s never a dull moment with Letter Zap. It has around 20 themed worlds with over 480 levels to play.

There are a lot of brains behind this one. The game of Lifeline was one of the firsts to be made for the Apple watch. It revolves around Taylor, the survivor of a spaceship crash. Taylor’slife depends on the decisions you make, and your job is to keep him alive.

You’ll be posed with several questions that make it a game of choice. ve as a sounding board and make decisions to try and ensure that Taylor doesn’t die.

The second and more updated Lifeline is about a girl, Arika who is on a quest to avenge and rescue her family. Once again, she is on a deadly mission and the only thing that can save her is the decisions you make.

These interactive-fiction series make it one of the best gameplays ever made. Some of the game titles are Lifeline: Silent Night, Lifeline: Whiteout, Lifeline 2, and Lifeline: Crisis Line.

The Soviets. Artificial Intelligence. Cold War. Sounds exciting right? This interactive fiction game has been made by following in the footsteps of the Lifeline series, where your responses determine the outcome. Your decisions could either save the world or lead to a nuclear explosion (the super-secret project that was shut down). And your identity is at stake,

Your task is to hack an old computer to decrypt some nuclear codes to clear your name. There’s this KOMRAD who has the key, but he’s unmovable.

Believe it or not, it is your smooth-talking skills that are going to you the answers. This game is played in real-time, and sometimes, it can really test your patience—the responses can take time.

Rules! Is a great daily brain workout. As the name suggests, you follow the rules to clear levels and progress to the new one. Here’s the catch. The rules in the starting levels may be applicable in the forthcoming levels as well. The game expects you to remember all the rules. It can simply say Play by Rule 1 or Rule 3. So, in a way, it’s a test of your memory as well.

This game is a great way to pass a bit of time when you are waiting in line, but sometimes, it may need your attention. As you progress the levels it becomes a bit challenging and you mustn’t lose your train of thought to remember what’s where.  The game allows you to play in beginner, expert, and timeless modes.

This is no ordinary game. The purpose of this game is multifold— it entertains you while keeping your brain fresh, active, and alert! The game encompasses about 35 small activities that seek to improve many cognitive skills like math precision, memory, reading processing, etc.

At the end of all of it, you can also track your performance to see how much better you’re getting at it after each attempt. There’s no motivator like validation from artificial intelligence! The app was rated as the best app for a reason.

You have one job. Blow a bubble so large it fits into the ever-changing target circle on the screen. It can’t be too small and it definitely can’t be too large, or it will blast in your face! You control how big the balloon is with the crown of your watch.

The hero of the game is the gum—each gum has a different name, size, color, property. So choose wisely! If you blow your bubble correctly, you’re rewarded with a combo multiplier and you can make a high score after highs core!

How do I get games on my Apple Watch?

Accessing games or rather downloading games onto an Apple Watch is rather easy. All you need to do is ensure that the Apple Watch is updated to its latest Firmware and is connected to the Wi-Fi. Then simply follow these steps to download a game:

There are some games that also require it to have an iOS version of the app on your iPhone. So, download it onto your phone accordingly.

It is also important to note that you can download the games without having to connect to the Wi-Fi. Of course, you will need the Cellular variant of the Apple Watch and it will cost more depending on the data charges.

The Apple Watch also automatically download the Apps and games you have on the iPhone. Once both the WatchOS and the iOS are in Sync, it will automatically appear on the Home screen of the watch. However, if you only want specific apps, then follow these steps:

What are the best apple watch games?

The best Apple Watch games would have to be Pocket Bandit, Tiny Armies, Twisty color, Elevate and the lifeline series. All these games are of extraordinarily high quality and are loaded with fun. From cracking safes to testing your mind or simply playing with colors these games will definitely blow your mind. Check out our list of the Best Apple Watch Games for all the details.