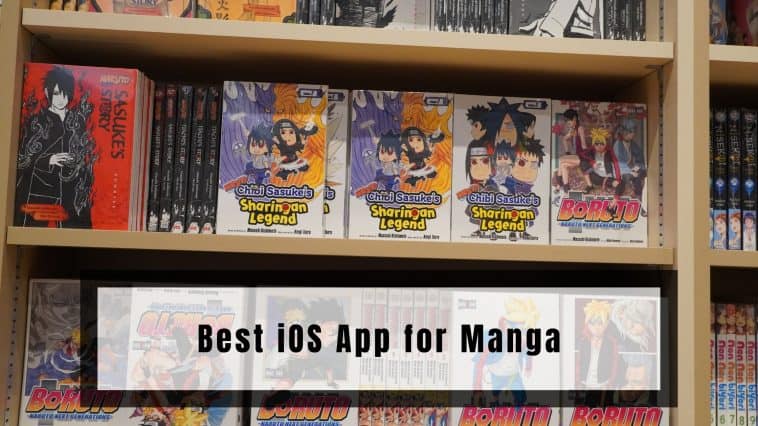 Looking for a good app to read the latest updates of your favorite Manga series? Check out our list of the Best iOS App for Manga.

Manga has always been one of my favorite ways to spend my free time and I’m sure it is the same for anyone reading this article.

And for the past few years, my favorite way to read manga has been through my iPhone. This is because it is convenient and I can carry a whole library of manga easily on my phone. Also, the excellent display of my iPhone takes the experience to the next level.

Manga apps have been on the App Store for quite some time now, so if you are looking for an app that offers the best manga reading experience, then you are at the right place. This article is a list of the Best iOS App for Manga.

After having reviewed all the best iOS apps for Manga based on various factors like UI/UX, features, price, and much more; my team and I zeroed in on 7 that really stood out. These 7 were put through a series of tests to determine the best. We found that:

The best iOS App for Manga is VIZ Manga. It is one of the best Manga Apps as it has a neat and user-friendly interface and hosts a massive catalog of Manga. Most importantly, it has a personalized library option and also comes with download features to help the user read it when they’re offline.

VIZ Manga is one of the best manga apps you can get on iOS devices thanks to its huge catalog of manga and comics, neat interface, and personalized library options. Features like free previews and downloadable comics make it even better. It’s one of the Best iOS App for Manga.

VIZ Manga has popular recent hits like Dragon Ball Super, My Hero Academia, Naruto Next Generations, and more. VIZ Manga also features classics like Vampire Knight, Tokyo Ghoul, One Piece, RWBY Manga Anthology among others. The app regularly adds new series and titles so that you can always find something new and exciting to read.

VIZ Manga allows you to build a library of mangas and comics that you can later personalize to your liking. You can then enjoy all the manga and comics in your free time from your personalized library. You can download your favorite manga and enjoy them offline. And if you are doubtful about buying a title/series, then you can read free previews so that you know what you are going to get.

MangaToon checks all the right boxes to make it one of the best manga reader apps for iOS devices. The app has a huge collection of manga spanning all popular genres including but not limited to comedy, romance, horror, action, and more. New users also get access to free manga and comics.

MangaToon is loaded with all the right features like downloadable content, personalized recommendations, and even daily webcomics. This makes it perfect for fans of manga, traditional comics, and webcomics, as you can get all three in one place. Some of the popular titles on MangaToon are Supreme Demon Warrior, The Mask, Mode II, and more.

MangaToon also allows you to write stories and share them on the site. This is a very cool feature as anyone budding manga writer/artist can start out using MangaToon. As the app is very popular, users can get real exposure and earn praise.

MangaToon is certainly one of the best manga apps you can get for iOS, what makes it better is that it supports multiple languages like English, Indonesian, Vietnamese, Spanish, Portuguese, and Thai, making it more flexible.

INKR Comics exists to support comic creators and publishers, by splitting the revenue between content creators and publishers. The app itself is excellent when it comes to options offered in terms of manga and comics. You can find manga from all popular genres like action, romance, comedy, horror, sci-fi, and much more. This pulls in tons of users and in turn tons of publishers and content creators to add to the catalog. So it is a win-win situation for everyone involved.

The app provides users with features like personalized recommendations, auto-sync between multiple devices, reading stats, and more. You even get a preview option so you can check before buying any manga. Titles like Attack on Titan, Scarecrow, Generation Wu, Spirit catcher, and more keep users excited.

If you love manga, then you will love WebComics for iOS devices. The app is one of the most versatile manga apps you can get for iOS devices. Everything from the interface to the touch controls is smooth and fluid.

WebComics has an extensive library with tons of manga and comics spread over various genres. WebComics does give you personalized recommendations but at the same time the app features an active community of users and you can interact with these users for recommendations and more.

WebComics has a premium subscription that gives you unlimited access to all manga and comics available on the app. There is a full-screen view and a dark mode so that you can read your favorite manga comfortably anywhere, anytime. The download and reading history along with the plethora of other features, make it one of the best apps for manga on iOS devices.

If you are looking for an intuitive and easy-to-use app for reading manga, then it doesn’t get much better than Manga Dogs. Manga Dogs has a massive library of manga thanks to their 20+ sources. This means you will find mangas from all genres from the most popular publishers.

Manga Dogs, like other apps in this list, offers personalized recommendations based on your reading activities. This makes discovering new mangas easy and direct. The app features popular manga like Martial Peak, Yuan Zun, Apotheosis, and more.

Manga Dogs also has an alert feature that notifies you whenever your favorite manga is updated. You will never miss out on an update with Manga Dogs. You also get the option to read vertically or horizontally. The app also features customization options that let you tweak the UI to your liking. Manga Dogs is one of the more intuitive apps you can get for iOS.

Crunchyroll Manga is an officially licensed manga app for iOS devices that gives you access to all the best and most popular manga as soon as they hit the newsstands of Japan. It offers tons of manga at your disposal and keeps you in the loop when it comes to new manga.

Crunchyroll Manga features top-rated titles like Space Brothers, King’s Game Origin, Attack on Titan, Fairy Tail, and more. The app also updates chapters and titles daily, so you will never run out of options when it comes to choosing the hottest manga titles to read from Crunchyroll Manga.

What makes the app itself good is that it has a nice pleasant user interface (UI) that makes even browsing through the app a joy. You also get customization tools that recommend you new titles and series to your liking. The app also has a premium membership subscription which gives you access to all the content on the app.

Manga Storm CBR is one of the best manga apps for iOS devices thanks to its numerous useful features. The app uses Google Drive, OneDrive, Dropbox, and more as servers to host manga and comics. This allows you to conveniently read different comics from different servers while offering you tons of content to read from.

The app has a simple yet effective interface giving you the option to read manga and comics in the way you prefer. The app allows you to create shortcuts and groups so that you can get reading quickly.

There is a favorites section where you add manga that you want to access first.  You can also use the app to read downloaded comics with support for all popular formats like CBR, cbz, pdf, and more.

There are tons of manga apps available for iOS devices, with many good, some decent, and even some poor apps that you can run across. For this list, I had to go through tons of apps so that I can find the best ones.

So there you have it, these are some of the best manga apps you can get for iOS devices. They all feature good interfaces, massive libraries, and are feature-rich to make the reading experience a joy. You won’t be disappointed with any of these apps.

Where to read manga for free on iOS?

There are many free apps that you can download and read manga from. But only a few like Crunchyroll, Manga Storm, and Manga Dogs offer free manga/comics to users. So be sure to check them out.

Scanlations are scanned digital copies of manga that you can get on the internet. And while there are some illegal scanlations you can run across, apps like INKR Comics are fully legal and even support the content creators and publishers.

Are manga apps on the App Store legal?

There have been a few instances where apps illegally sourced and distributed manga on the App Store. Apps like Manga Rock, Batoto, Mangago, and more have been removed from the App Store for illegally distributing manga. The above apps in this list are all completely legal and safe so you don’t have to worry.