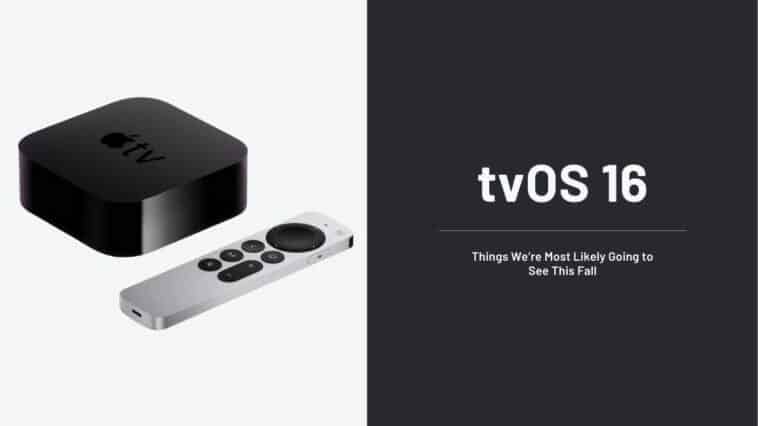 Apple has started rolling out its 7th beta update for their new tvOS 16 which they first hinted was coming this fall, at their keynote WWDC event in June 2022.

From what we can tell, it’s got a whole load of interesting new features and updates making it our favorite tvOS version of all time.

So what’s in store for the general public later this year?

I’ll cover all there is to know about the new tvOS 16 including the speculated release date and walk you through all of the changes you can expect to see on your device this year.

tvOS 16 was first announced to the public at Apple’s WWDC event in June 2022. Their first Beta test version was later released in July and since then we’ve seen a total of 7 Beta tests till date.

Based on speculation, rumors and from Apple’s past launches, we can assume that they would release the final version of tvOS 16 this September alongside the watchOS 9 and the new iPhone 14.

So if we take this into account then the new tvOS 16 should get released within the next week, most likely on the 7th of September.

However, this is still a speculation as Apple has not provided us with an official release date as yet. So we can only hope that tvOS 16 gets an earlier release than late September or October when the new macOS Ventura is expected to come out.

Which Devices Will Be Compatible with tvOS 16?

From what we’ve learnt, the new tvOS 16 should be capable of running on most of the devices that currently support tvOS 15.

So that would mean that the Apple TV HD, the Apple TV 4K or later, HomePod and HomePod Mini will receive the new tvOS 16 update this fall.

While not much was discussed at the WWDC event in June regarding the new features and updates coming to tvOS 16, we did find quite a number of changes while testing out the Beta releases.

With tvOS 16 Beta 7 build number – 20J3571a, we found a bunch of new updates that can really enhance user experience. To start things off, the new Swift UI allows developers to customize the app’s interface and can improve functionality.

We can also expect to see :

Game Controller Compatibility – The new Apple tvOS 16 will support Bluetooth wireless controllers as well as wired USB game controllers. Which means that users will be able to connect Nintendo Switch Pro controllers and the Joy-Con controllers to their Apple TV.

Support for HDR10+ – Apple has confirmed that the new tvOS 16 will support HDR10+ and will deliver better quality and resolution on the screen.

Apple Fitness+ – From the Beta 7 we found that there will be an update to the Apple Fitness+ app and a new Intensity metric will be calculated to measure key moments in a workout session. The new metrics that will show up are Easy, Moderate, Hard and All Out.

Support for Matter – The new tvOS 16 might receive full support for Matter and users would be able to connect and control different certified Smart Home products from brands like Amazon, Google, Samsung among others.

While this feature was first introduced in the tvOS 15 beta, it was not released at the final launch but we can see hope it live and in action this fall with tvOS 16 since it’s a part of the new Beta 7 test release.

From what we understand, the new tvOS 16 operating system will integrate with iOS, iPadOS and even watchOS thus unlocking new experiences on the Apple TV.

Right now we know that the cross device compatibility only works for Apple Fitness, so we’re unsure that it will be released for other apps.

Other Features and Updates Coming to tvOS 16

Apart from these major changes and new features, Apple tvOS 16 will also receive some minor updates to the UI and navigation.

For example, the new tvOS 16 will come with new video previews to boost discovery and the control center will receive a new toggle for the time format and include 24 and 12 hours.

Also, Accessibility has a new Hover Text option making it easier to select and view information about a particular text.

Though these new updates are quite cool, we can’t confirm that they are all going to be a part of the final tvOS 16 release next month. All we can do is wait and see what happens and hope that Apple doesn’t decide to push any of the updates to next year.

In order to download the new tvOS 16 beta software for your Apple TV, you will first need to own a Mac, run the Apple Configurator and also have the latest version of Xcode.

Once everything has been configured properly, the update should take place automatically, over the air.

While the Beta version is up for download, I would recommend that you proceed with caution as users have reported bugs and annoying popups while using the new tvOS 16 Beta.

See also  Everything we Know About the Apple Watch Series 8 | Launch, Rumors, Leaks and More 2022

Once iTunes has updated your Apple TV, hook it back up to your television and you’re good to go.

The final version will get updated once it has been released to the general public.

If you’re already running iOS 16 beta or iPadOS 16 beta then follow these steps.

With the new beta 7 out and a flurry of new updates and features coming our way, we can only hope that Apple considers adding a few more changes to the tvOS 16.

Considering Apple filed a patent last year for a display they’re working on which can show different content at different angles, we can hope for this functionality to come out in the near future since the technology is still a bit too complex.

While Apple might bring out cross device compatibility for their Apple Fitness+ app, getting this ability for all apps will be a blessing and is another feature we’d love to see in the near future..

Finally, we’d love for the new tvOS to have the ability to support external webcams. This will make it easier for users to take FaceTime calls on the Apple TV without having to connect and juggle between multiple devices.