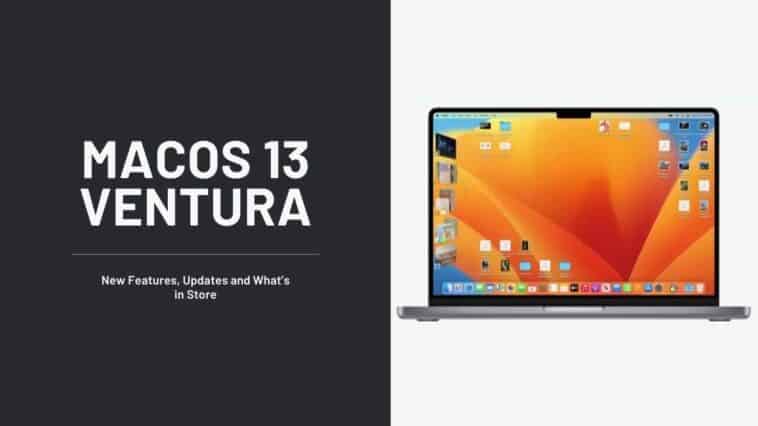 At their WWDC keynote event in June, Apple introduced us to their new Mac operating system which will be released later this year, code-named: Ventura.

It’s a sheer upgrade from Monterey and there are a number of new features and updates to a lot of Apple’s stock tools that we consider to be major game changers.

Based on the last updates we received, macOS is still in beta testing and the OS is designed to provide users with a multitasking experience like no other.

Let’s take a look at everything we know so far about macOS 13 Ventura including potential release dates, rumored features, software updates and more.

macOS 13 Ventura – What We Know So Far

On the 6th of June,  we saw a glimpse of Apple’s new macOS Ventura and at the keynote, they hinted at it getting a public release later this year.

macOS 12 Monterey was launched on October 25th 2021, so if Apple sticks to roughly the same time frame, then the public roll out should take place mid to end of October 2022.

Update 22-Sept-2022 : Apple has finally confirmed that the launch of the new macOS 13 Ventura will take place in October 2022. However, the date is still not entirely confirmed. However, based on Apple’s track record, we’re anticipating the release of the new OS to be somewhere between October 6th to October 26th.

Update 30-Sept-2022 : Apple might not have their Fall October event and the new macOS as well as the other pending releases may take place via press conference instead.

Update 13-Oct-2022 : macOS 13 Ventura will launch on the 24th of October according to new updates from Bloomberg’s Mark Gurman. The new OS will launch alongside the iPad Pro and the new Mac.

At the time of writing this, Apple has released seven beta versions of macOS Ventura to developers and five versions to public beta testers.

From the release notes and leaks online, the public beta three has seen an addition of new features such as iCloud Shared Photo Library, Lock-down Mode, support for virtual cards in Safari, and Ventura also reintroduces track-pad gesture videos in the macOS settings app.

However, there are still a couple of bugs with the beta version that developers are currently working to fix.

The seventh beta is build number 11A5342f and we’re expecting there to be at least one more beta version released before the official launch date.

The new beta build brings significant fixes to Stage Manager and the Continuity Camera which were riddled with bugs in the 5th beta build. There is also fixes pushed for Handoff to make the whole transfer calls to and from the iPad or iPhone more fluid while using FaceTime.

Update 22-Sept-2022 : Apple has released the 8th developer Beta of macOS 13 Ventura yesterday. The update is 1.61GB and can be downloaded from within the System settings.

UPDATE 06-Oct-2022 : Apple has seeded its 8th Beta of macOS Ventura for public testing and are on their 10th Beta for developers. As of now we’re unsure what changes have been made to the latest Beta since the developer notes have not been updated by Apple as yet

UPDATE 13-Oct-2022 : Apple has seeded its 11th Beta for developers a week after launching the 10th beta. The new beta contains primary bug fixes for Stage Manager, Handoff is now more fluid in FaceTime and scheduling and undoing emails in the Mail app is now up to 10 seconds with no bugs.

UPDATE 20-Oct-2022 : Prior to the Monday launch of macOS Ventura, Apple has released a second RC Beta to developers that can be downloaded from the Apple Developer Center. The second Release Candidate beta (Beta 13) has the build number – 22A380, replacing 22A379.

Not all Mac’s will be able to run Ventura and from our estimates, there’s going to be a number of Mac devices that are compatible with Monterey, but will not support Ventura.

As confirmed by Apple, (on their website), the following Macs will support the final version of macOS 13 Ventura.

Based on this, the following devices will not receive the new update and would support up to macOS Monterey.

These models were pulled off the shelves a while ago, but still support Monterey. However, they would not be eligible for an upgrade to Ventura this year.

We still don’t have confirmation on a couple of models, but we’re hoping that Apple considers launching Ventura for them as well.

macOS Ventura – Latest Features That We Know Of

As I said earlier, macOS Ventura is designed to primarily improve multitasking and offer better integration with the iPad and iPhone. So, most of the new features will revolve around just that.

Based on what we saw at the WWDC 2022 and from what we could gather from beta releases, here’s every new feature Apple has included in their new OS.

Stage Manager is Apple’s new tool to organize windows and apps on a Mac. It’s designed to help users focus on one primary task while minimizing the clutter from other open windows or apps.

From the last update we came across, Stage Manager let us group different windows together and the primary app was positioned at the center of the screen whereas the remaining apps in the window were floating on the left.

To toggle between different apps, simply clicking on the window will pull up that app and if there are many grouped windows, tapping on any group will highlight the other apps or windows that are a part of that group and we were able to select any window of our choice.

Stage Manager can be accessed from the Control Center, so it’s easy to locate on the Mac and this should be the same with the final release.

Another interesting feature we found that’s coming to Ventura is the ability to use an iPhone as an external web camera simply by bringing the iPhone close to any Mac running macOS Ventura.

We were even able to utilize the ultra wide lens on the iPhone to enable a new view called “desk view”, where the ultra wide records an overview of the desk while the primary lens focuses on our face.

It’s also quite possible that Apple plans to bring in a new update with this feature where users can directly switch handling FaceTime calls directly from an iPad over to an iPhone or Mac without having to click any button.

There are still a couple of bugs with the continuity camera, but by the looks of it, Apple just might get all their devices to integrate with one another and this could make life a whole lot easier for those who are trying to create a complete Apple Ecosystem.

Update: New finds suggest that macOS Ventura will in fact receive the Continuity Camera upgrade and users will be able to utilize their iPhone as a webcam with the Mac when the update releases. The Belkin iPhone mount which was first featured in WWDC is now available to buy on Apple’s website and is priced at $29.95.

Spotlight is another feature that’s coming to the new macOS Ventura. We’ve seen and used Spotlight in Monterey, but it lacked certain capabilities that we can confirm will be included in macOS Ventura.

Spotlight will now allow users to preview files through Quick Look, search for photos based on time, location, people and even objects that’s within the photos.

We’re also getting word that there’s going to be an update to the Live Text feature in Spotlight where users will now be able to search for text within images and videos and we can also create new documents, set up a timer and more, all from within the Spotlight app.

This feature allows users to play soothing white noise on the Mac and the noise can be switched between the sound of rain, ocean or a running stream.

This background sound will help users enter a zen mode while multitasking or it can be used as a sleeping aid with a timer set so that the white noise can automatically turn off.

The Beta version showcases a lot of the new features coming to macOS Ventura and one that we found to be quite helpful is the new and improved reminders app.

With the new update, the reminders app now supports grouping by time and date as well as pinning lists and using lists as templates.

Users are also able to change the font and formatting of the text by including bullet points, dash lists, bold, italics and even underlined formatting.

Also, the entire System Preferences has received a major upgrade. In macOS Ventura, it has been changed to System settings and the entire layout has been modified to make it easier to navigate.

According to me the new System Settings menu resembles the Settings app on the iPhone or iPad and the traditional icon grid has been taken down.

While the appearance and style has changed, Apple has decide to retain the search bar to make it easier for users to find a particular setting.

There are still some UI issues and bugs with the new System Settings tool, so we can expect a few changes before the final release next month.

From the WWDC event, Apple highlighted the software changes that will be made to certain apps like Messages, Safari, Mail, Photos, and FaceTime among others.

These updates are currently confirmed to be a part of the release and users who are testing the beta version of macOS Ventura are able to experience these changes first-hand.

Some of the changes that we can confirm are getting added to Ventura are:

Other Features Coming to macOS Ventura

Game Center – The dashboard has been redesigned to make it easier to see your friends’ play activity and achievements at a single location. The update also supports SharePlay for playing games with friends while on a FaceTime call.

Apple Pay – Payment sheets have been overhauled to easily add cards, manage information, and review details about a purchase before completing any transaction.

Dictation – Dictation will now support automatic punctuation for inserting commas, periods, and question marks while dictating a text. It also allows you to insert emojis and support for dictation requires an Apple silicon Mac.

iCloud+ – You will be able to use the Hide My Email feature in third-party apps.

Music – Improved recommendations and new music notifications to make it easier to keep track of your favorite artists.

News – There’s going to be a new “My Sports” section that provides real-time info about your favorite teams, leagues, and athletes.

Siri – Siri gets a new updated design and provides more targeted results to help users get information and answers easily.

Security Updates – The Rapid Security Response feature will receive an update where security updates can be applied to the Mac without restarting the Mac.

If you want to test macOS Ventura before its release, you can do so by taking part in the beta testing program.