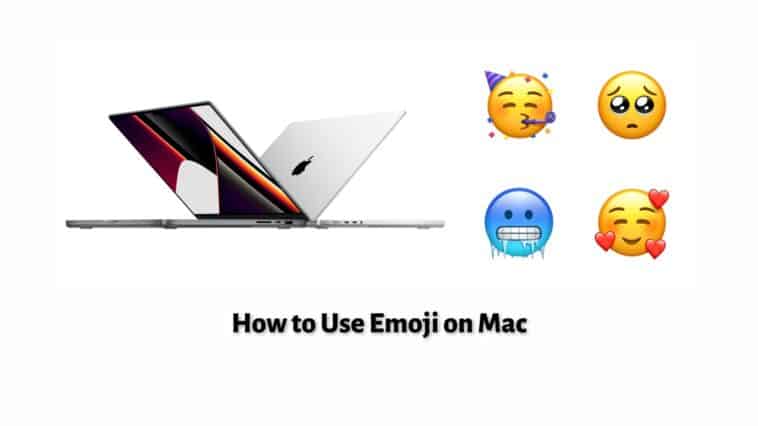 Love using emojis but don’t know how to do it on your Mac? This guide on How to use Emoji on Mac will educate you about everything you need to know when it comes to emojis on Mac and how to use them.

Emojis are extremely popular texting tools especially when it comes to personal/informal texting and messaging. They are widely used by almost all smartphone users because it is easy and it helps users to express their emotions without needing to type long sentences. They are also cute.

Smartphone users use emojis often because they are just a few taps away, but when it comes to Macs, it is a rare occurrence to see someone use emojis. This is because many people don’t even know how to access the Emoji Viewer.

This article is a guide on how to use emoji on Mac and it will also provide you with some tips and tricks regarding emojis and Mac. Read on to know more.

How to Use Emoji on Mac

How to Use Emoji on Mac

Emojis are a fun way to improve texting and everyone uses them on smartphones all the time. On Macs, many don’t know how to use emojis because we interact with a mouse and keyboard, and there are no emoji keys on a keyboard.

You might have never used emojis on your Mac or maybe have had a hard time using them, it can be done in a simple way and this guide will show you how. Follow the steps below to know how to use emoji on Mac easily,

Step 1 The first step is to make sure you have selected the input field you want to use the emoji in. Position your cursor on the input field so that you are ready to add emojis.

Step 2 Now, press the Control + Command + Space Bar keys on your keyboard simultaneously and hold them down.

Step 3 An overlay will open with emoji characters in it.

Step 4 Now, you can choose an emoji that you want to use and double-click on it with your mouse to use it. The emoji character will get inserted onto the input field next to the text cursor.

Step 5 The overlay also features a search bar that you can use to search for emojis making it easier for you to find the appropriate emoji to show your emotions.

You can use emojis on any text input field on a Mac, this includes, chat apps, websites, search bars, and apps like Pages, Numbers, and more. So, now that you know how to use emoji on Mac, there are a few tips that can make life easier for emoji lovers on Mac. Read on to more about emoji keyboard Mac.

Lock the Emoji Viewer on your Mac

The emoji overlay known as the Emoji Viewer appears when you press Control + Command + Space Bar and disappears once you pick and use an emoji, this can be annoying especially when you want to type in multiple emojis in a sentence or a paragraph.

So if you want to lock the Emoji Viewer from disappearing, do this,

Step 2 Now, once the Emoji Viewer is open, tap on the icon next to the search bar at the top right corner of the overlay.

Step 3 This icon will convert the Emoji Viewer into the Character Viewer window which won’t disappear until you manually close it using the x button on the top left corner of the overlay.

So now you can use emojis without having to open the overlay every single time. This makes it more convenient and easy when you are talking to friends or family with whom you might use a lot of emojis.

There are two ways to enable the Emoji Character Viewer, one by pressing the icon next to the search bar in the Emoji Viewer as explained above and the other is by enabling it in System Preferences. To do this, follow the below steps,

Step 1 On the top left of your Mac screen, there is a small Apple logo, click on it.

Step 3 In the System Preferences window, click on the Keyboard icon in the second row.

Step 4 Now, tap the checkbox next to Show keyboard and emoji viewers in the menu bar option to enable it.

With the new M1 Macbooks, Apple has redesigned the fn (Function) key to work differently. The new fn key with a Globe sign on it now opens the Emoji Viewer overlay when you press it once. If you press it twice it will open the Dictation feature.

While having to press a single button to open the Emoji Viewer can be useful for some, it can also be annoying when you are working and accidentally open the overlay. So, if you are someone who doesn’t need this shortcut on your Mac, then you can disable the feature too.

To disable the fn key shortcut for emoji on your Mac, follow these steps,

Step 1 Press the Apple icon on the top left corner of your screen.

Step 2 Click on System Preferences and then choose Keyboard.

So, you can either easily access the Emoji Viewer on M1 Macs or disable the shortcut if you feel like using the above steps.

How to Use Emoji on Mac with Touch Bar

The Touch Bar might be a tool that may have not been popular amongst users or reviewers and this has been confirmed as Apple has removed it from the new M1 Pro and M1 Max Macs. While it was not loved, it still had some cool features and use cases.

One of the cool features of the touch bar was the easy access to emojis. When typing the Touch Bar used to display an emoji icon, tapping on this would display a line of emojis, you can choose any emoji and use it by tapping on it. So, if your MacBook has a Touch Bar and you want to use emojis, then this might be the fastest and most convenient way to use it. Do give it a try and check for yourself.

How to Change Emoji Shortcut keys on Mac

If you don’t want to press three keys or don’t like to use the fn button as the Emoji key, then you can change the key bindings to your liking. This means that you can conveniently open the Emoji Viewer whenever you need. To change Emoji Shortcut key/s, do the following,

Step 1 Click on the Apple icon at the top left corner of your Mac’s screen.

Step 2 Click on the System Preferences option, then choose Keyboard.

Step 5 Then, in the Menu Title bar, type Emoji & Symbols.

Step 6 Finally, choose the shortcuts keys you want to use in the last box.

Once you have done this, the new shortcut you typed in will open the Emoji Viewer. So instead of Control + Command + Space Bar or the fn key on M1 Macs, you can use any shortcut you want.

Emojis are a cool way to improve conversations either when texting, messaging, or on emails. While they are widely used on smartphones like iPhones, almost no one uses them when typing on Macs. This is because emojis are not readily available to use on Macs.

On Macs, you need to use keyboard shortcuts or enable the Emoji Viewer in the settings to use them. If you didn’t know how to use emoji on Mac before, you now know how because of the above guide. There are multiple methods that you can try, so choose the one that is most convenient for you and have fun using emojis on Mac.