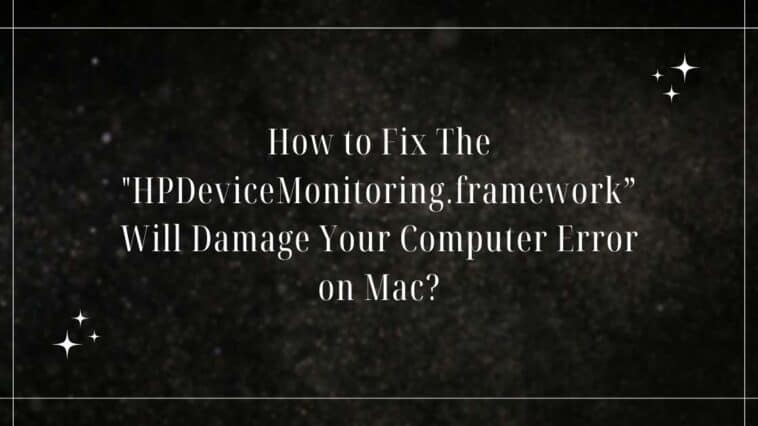 Have you ever connected your HP printer to your Mac and had an error message appear on the screen?

Well, I have and trust me, it’s annoying! I’ve come across a couple of error messages that all point to the same issue.

I was however able to find out that this error message only appears on Mac’s running Mojave or higher and not on any of the earlier versions of macOS, making it impossible to use a HP printer on newer versions of the OS.

But what is the error and How to Fix the “HPDeviceMonitoring.framework” Will Damage Your Computer Error on Mac?

Read on to find out all you need to know about this harmless error and check out five fixes that can stop this error message from appearing on your Mac.

Summary of how to fix ”HPDeviceMonitoring.framework” Will Damage Your Computer Error on Mac:

How to Fix ”HPDeviceMonitoring.framework” Will Damage Your Computer Error on Mac?

What is the HP Framework Error on Mac?

The first thing I’d like to start off with is that the error message titled “HPDeviceMonitoring.framework” is not a malware or virus, but an error in the software for HP printers.

The error message appears when Apple’s XProtect software, which is a part of the Gatekeeper security system, revokes the certificate of the HP software.

It can also appear if the printer drivers have malfunctioned or the software is corrupted.

Once this happens, the Mac prevents the HP printer software from functioning and users will proceed with any printing related tasks as the error message will appear on the screen and can’t be closed unless the Mac is rebooted.

Apart from the HPDeviceMonitoring.framework error message, users have also reported receiving other error messages that pertain to the same problem. Some of them are:

While HP and Apple got to immediately rectifying the issue through a software update, there are still many users that face the HPDeviceMonitoring.framework on a regular basis.

Fixes For The “”HPDeviceMonitoring.framework” Will Damage Your Computer” Error on Mac?

One thing that I can say is that the HPDeviceMonitoring.framework error has stopped appearing for most users post the update Apple and HP released a few years ago.

See also  How to Download, Install and Play Steam Games on a Mac | Quick Guide 2022

However, since there are still many users reporting the same issue even now, it’s only right that I share a couple of quick fixes to resolve the issue.

Let’s go over the ways you can fix the “”HPDeviceMonitoring.framework” Will Damage Your Computer” Error on Mac.

The first method is one of the easiest ways to get rid of the error on Mac’s and that is by deleting the printer from the Mac and then proceeding to uninstall the HP printer software.

Since the error can be caused by the Utility, Smart or Easy Start apps it’s best to get rid of them as they can cause unknown problems on a Mac if their software is corrupted or damaged.

Delete the Printer on your Mac

Remove the HP software from the Login Items

Uninstall the HP Printer App from your Mac

To uninstall the HP printer app from your Mac,

Apps that have not been installed from the App Store or those that are essential to the functioning of the Mac will not have the X icon nor can they be deleted from the Launchpad.

Fix #2 — Update the Drivers on your Mac

The second fix involves updating the HP printer drivers on your Mac. There are a couple of options available where you can either update a driver or install a new driver.

In order to fix the driver issue, you need to ensure that macOS is the latest version, so we’re talking about macOS Monterey.

If you’re unsure about which OS you’re running, head to System Preferences and then click on Software update.

To update the printer drivers,

If the update still doesn’t fix the issue, proceed to the next fix.

Fix #3 — Install a Fresh Copy of the HP Printer Software

If you’ve already uninstalled the HP software that’s causing the issue, it’s time you check either Apple or HP and see if there’s a new version of the software available with the bug fixed.

The new software can be downloaded from the HP support page or from the App Store.

However, I did notice that older printers that were made prior to 2017 support the HP 5.1.1 Printer Software Update which is currently available on Apple’s own website.

The software for newer HP printers can be downloaded from the HP support website or by clicking on the link below and searching for the right printer model and latest software version.

Since the issue is caused by a revoked certificate and nothing can be done on the Mac when the error message appears, it’s a good idea to hard reboot the Mac to wipe out any bugs or software glitches.

To reboot the Mac, press and hold the Command + Control + Power keys on the keyboard at the same time until the screen goes blank and the Mac restarts.

The final option available is to use AirPrint if the HP printer is compatible.

What you can do here is basically uninstall the HP printers driver and then use AirPrint instead to have files printed remotely..

If you do not see the HP printer in the list of connected devices, follow these steps to add it to your Mac,

If by any chance there are no printers found even if the HP printer supports AirPrint, then restart the Mac as well as the printer and then check if the printer has a driver update and try once again.

What is Gatekeeper in Mac?

Gatekeeper is Mac’s own security technology that’s designed to protect the Mac by allowing only trusted software to run on the system. Gatekeeper verifies the software and checks its validity to see if the developer is legit or not and if the software has any hidden malware.

Why did I get the “”HPDeviceMonitoring.framework” Will Damage Your Computer” error message?

The “”HPDeviceMonitoring.framework” Will Damage Your Computer” is an error message that appears when Gatekeeper in Mac can not validate the HP printer certificate. It was a bug that occurred in 2020 and has since been rectified. However, users still do receive this error from time to time and fortunately, it can be fixed with a few simple steps.

Are there other error messages that can appear that are related to HP printers in macOS?

Yes, in fact there are quite a few different error messages that can appear when the HP software, printer or scanner is not able to function properly on a Mac. Some of these are:

Well, I do hope that this guide helped you get rid of the “”HPDeviceMonitoring.framework” Will Damage Your Computer” error message and I hope you’ve been able to understand what needs to be done in case you face the same issue again.

While the problem doesn’t present itself as often as before, it’s still something that Mac users deal with around the world.