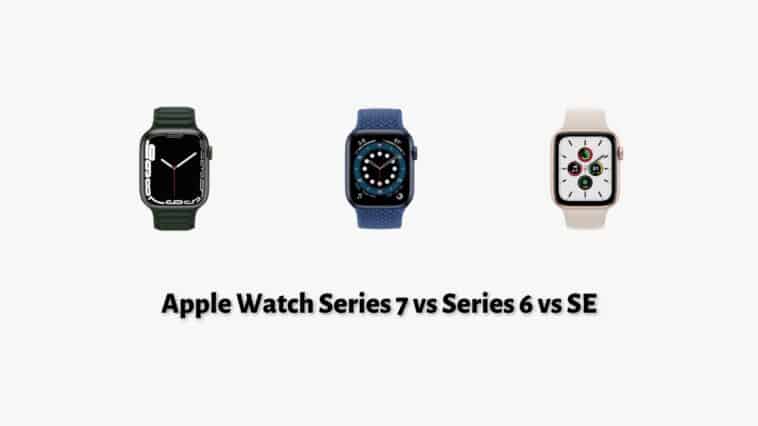 Looking to buy a new Apple Watch but spoilt for choices? Our comparison of the Apple Watch Series 7 vs Series 6 vs SE will help you choose one.

With the new Apple Watch Series 7 released, you might be wondering if you upgrade from the Series 6 or if you should choose the cheaper, more value-oriented Watch SE. All of them are awesome smartwatches in their own right, but they have similarities and differences which can make it difficult to choose one over the other.

This article will compare all the models extensively and you can make an educated choice. So read on to know which Apple Watch suits you the best.

Related: Which Apple Watch to Buy

Apple Watch Series 7 vs Series 6 vs SE: Design and Build

Apple Watch Series 7 also manages to increase the screen size a bit by reducing the bezel width to just 1.7mm. Series 6 and SE feature 3mm thick bezels. So while the overall size of Series 7 is only increased by 1mm, it has a display that is 20% larger than Series 6 and the SE.

All Apple Watches are built exceptionally well, but different models offer you choices between different case materials if needed. Apple Watch Series 6 and 7 can be equipped with Aluminum, Stainless Steel, or Titanium cases. Apple Watch SE doesn’t offer any choice between case materials, you can only pick it up in Aluminum.

All three Apple Watch models are water-resistant and can be submerged up to 50 meters deep in water. But only the Apple Watch Series 7 has an IP6X dust rating. So the most durable out of the three watches is the Series 7 but it is negligible and you would be more than happy with the build quality and design of both the Series 6 and SE.

The new Apple Watch Series 7 features a 20% larger display thanks to slimmer bezels and a slightly larger case. Comparatively, both the Series 6 and SE feature displays are of the same size.

The new Series 7 has softer, more rounded corners along the edges, allowing it to seamlessly curve over the glass. All three watches feature Ion-X glass when you choose an aluminum case, while the Series 6 and 7 come with Sapphire glass if you choose the stainless steel or titanium cases.

All three watches in the comparison feature the same display technology, they all use LTPO OLED panels that can display up to 1000 nits of brightness. Both the Apple Watch Series 7 and Series 6 support Always-On display, while the SE doesn’t feature Always-On display.

When it comes to performance all three watches feature different processors, so all of them perform differently.

The newest Series 7 features the all-new S7 SiP chip. During the announcement, Apple didn’t make any performance claims, but testing has found it to be 20% faster than the Apple Watch SE.

The Series 6 uses an S6 SiP, Apple claims it to be faster than the Series 5 with the S5 SiP. The S5 is the same chip found in the Apple Watch SE too. So this means that even though the S7 is a new chip, it is similar in performance to the S6.

Apple Watch Series 7 vs Series 6 vs SE: Sensors and Tracking

When the Apple Watch Series 6 launched, Apple announced new sensors and tracking features. These included a blood oxygen sensor, an improved 3rd gen optical heart sensor, and features like cycling detection and more. These were an improvement for the Series 6 over the Series 5 and SE.

With the Apple Watch Series 7, Apple for the first time didn’t improve anything with respect to health, fitness, and activity tracking. The Series 7 features the same sensors and technologies as the Series 6.

Both Series 6 and 7 are an improvement when compared to the SE. The Apple Watch SE features the 2nd gen optical heart sensor and skips on the blood oxygen sensor. It also has poorer fall detection and lacks cycling detection. All three watches feature an always-on altimeter, GPS, gyroscope, and ambient light sensor for other health and tracking features.

So overall, when it comes to health and fitness tracking, there is no difference between the Series 6 and 7 models, so you can go wrong with either of them. But you will lose some features and sensors if you choose the cheaper Apple Watch SE, but even then I feel like the SE has all the important ones covered.

These are some extra features of Apple Watches in this comparison. All three watches feature the same loudspeaker. All three models also come with 32 GBs of onboard storage.

They all have the same connectivity options too, GPS or GPS + Cellular version, Bluetooth 5.0, Wi-Fi 802.11 b/g/n. The only difference is that the SE features 2.4GHz Wi-Fi while the other two feature both 2.4 and 5 GHz Wi-Fi.

And finally, when it comes to Watch Faces, all three watches run watchOS 8, meaning they have access to all the same watch faces. But the Series 7 with its bigger screen and slimmer bezels, has some watch faces that suit it more than the Series 6 or SE.

So overall, when it comes to extra features, all three watches are evenly matched with the SE slightly lagging.

The battery life of Apple watches hasn’t seen any bumps in the past few years and the comparison between the Apple Watch 6, 7 and SE is a testament to that fact. All three of them have been advertised by Apple to offer ‘all-day battery life’ which translates up to 18 hours per charge.

The only difference between these watches when it comes to the battery is their charging speeds. The Apple Watch Se is the slowest charging of the bunch, while both Series 6 and 7 feature fast charging technology.

The Series 6 can charge to 100% in an hour and a half, while the Series 7 can hit 80% charge in 45 minutes. All three watches charge wirelessly using the magnetic charger included in the box.

Related: Best Stands to Charge iPhone and Apple Watch Together

Apple Watch Series 7 vs Series 6 vs SE: Pricing and Conclusion

The new Apple Watch Series 7 starts at $399, while the Series 6 is not on sale anymore. The SE retails for $279 making it a great value for money option. So if you are someone with a Series 6 Watch, then I would suggest skipping the Series 7 because it doesn’t offer a significant improvement.

The Watch SE though lacks some features, is still an excellent buy, it has all the important features and is priced competitively. Series 7 is the best Apple Watch ever so get it only if you are using a Series 5 or older model. Get the SE if your budget is limited and hold on to the Series 6 as it is still amazing.

Related: How to Unpair and Reset Apple Watch