Owing to the fact that I have an iPhone and an iPad, I wanted to get into the Apple Ecosystem and decided to opt for a Macbook. Little did I know, I was left with a nerve-wracking question, “Which Apple Laptop should I buy?” With a sleek aluminum finish, lightweight with a premium feel, Apple laptops have been on my wish list for a while now and it’s finally that time where I go ahead and purchase one.

Related: How to Clean the MacBook Screen

Though there aren’t many models in the market, it’s still difficult to choose the right Macbook. They have basically two primary models of Macbooks which come with a range of variants designed to target users with different intentions.

Let’s get into the available Macbook Air and Macbook Pro ranges that are currently on sale and I’ll let you in on how I decided which MacBook was best suited for me.

Related: Where to Buy a Refurbished MacBook

After having reviewed all Apple Macbooks in the market based on various features like design, performance, function, features and price; My team and I zeroed in on 3 that really stood out. These three were further put through a series of stress tests to determine the best. We found that:

The best Apple Laptop to buy is Macbook Air 2020. Not only does it still retain it’s predecessor lightweight build. It has become much faster and more powerful due to the addition of the latest M1 chip. While the display is still 13.3″, it offers a resolution of 2560×1600 and over 4 million pixels. It is also equipped with other fantastic and useful features.

Which Apple laptop should I buy?

Which Apple Laptop should I buy?

The ultimate answer to my question, Which Apple laptop should i buy? are:

The 2020 model of the Macbook Air has a larger display than the model from last year. The Macbook Air 13” comes with the new Magic Keyboard, an updated track-pad, two USB-C/Thunderbolt ports.

Related: How to Hide Files on Mac

The Macbook Air has a jaw-dropping Retina display that has a resolution of 2560*1600 and over 4 million pixels delivering razor sharp clarity. The 13.3” display uses true tone technology to modulate the white points of the display and blend in with the colour temperature of its surroundings.

The Apple Macbook Air is a lightweight, heavy-duty notebook that weighs a measly 1.29Kg. Equipped with the latest processor, the Air has been drastically improved in terms of CPU and GPU performance.

This Apple Macbook Air is equipped with a proprietary M1 chip that is frankly out of this world. In fact, it is much better than the intel based Macbook’s as it can deliver and amazingly seamless performance without any issues. Additionally, this chip works well with the Apps and Programs that are native to the Apple ecosystem. For example, Apple’s web browser Safari works in a smooth and stable manner, without any lags, glitches or stutters.

The M1 chip will also turn on the laptop instantly. It will turn on the moment you tap the touchpad. This is a huge difference to other Macbook’s that take a while to turn on.

In terms of power, the battery on the Macbook Air can last for hours together on a single charge making sure all your data is saved and secured. A built-in 49.9W lithium-polymer battery that requires a USB-C charger in order to be recharged is what powers the Macbook Air.

This Macbook also happens to be extremely quite as there is no fan. So, it depends on the M1 chip to allocate power efficiently and

The Macbook Air can be configured as per your liking and there are two available variants in the market for better performance. And the Thermal heat spreader ensures to evenly distribute heat.

At a slightly higher price range, the Macbook Pro 13” starts at $1244 and comes in a few variants based on the type of processor or storage you choose. This notebook is ideal for designers or those looking to run hardcore applications or games.

Though it weighs more than the Macbook Air, the Pro 13” is still nice and sleek with a dusted finish to the body. Considered Apple’s Middle child, the Macbook Pro 13” is something to ponder about if you’re not too tight on shelling a few extra bucks.

Much like it’s younger sibling, the Macbook Pro 13” also houses a 13.3” Retina display with IPS technology that is capable of delivering 2560*1600 resolution at 227 pixels per inch of the display.

The 13.3” display uses true tone technology to modulate the white points of the display and blend in with the colour temperature of its surroundings.

Weighing slightly heavier, the Macbook Pro 13” stands at 1.4Kg and is extremely portable with a width of 0.61 inches. Powering the Macbook Air 13” is an 8th Gen Intel Core i5 processor which can be swapped out for either the i5 or the i7 processors for greater performance.

Each Macbook Air 13” comes with multiple variants and this can be opted for while purchasing the device, each one is an upgrade from the last and would be priced differently.

The final on the list of Which Apple laptop should I buy? is By far the most powerful Macbook, the Pro 16” is designed for those who need to push their notebook to the limit. The most expensive Macbook, retailed at $2000+, the Macbook Air 16” is notably the most epic Macbook to own.

Featuring the largest Retina display on a Macbook, the Pro 16” brings colours to life with crisp images while delivering brighter white spots and darker blacks. Check out our “Which Apple Laptop should I buy?” for all the details.

The display is a 16 inch LED Retina display with IPS technology and has a resolution of 3072*1920 at 226 pixels per inch. Much like its counterparts, the Macbook Pro uses true tone technology to modulate the white points of the display and blend in with the colour temperature of its surroundings.

The heaviest Macbook in the market, the Pro 16” weighs in at a whopping 2 Kg and is still super slim making it easier to be carried around places. The base processor on the Pro 16” is a 2.6GHz i7 Intel processor with turbo boost and this can be upgraded or configured if you’re looking for a faster processor.

Each Macbook Pro 16” is powered by a built-in 100W Li-polymer battery that can last for up to 11 hours on a single charge. This battery can be charged with a 96W USB-C charger that comes with the device.

The processors, storage and RAM can be swapped out and customized while placing the order online. The variants for the Macbook Pro 16” are

While on the hunt I managed to get my answer to which Apple laptop should I buy? These three models are currently available in 2020 and have some of the best configurations and features than most other brands.

I ended up picking the Macbook Air as it was ideal for my line of work. I needed something that was lightweight and could easily be carried around. The Macbook Air is an entry level super-notebook that is easy to handle, powerful enough to multi-task and get the job done without any lag.

For those who are into programming and graphic designing or are Pro fans, then the 16” Macbook Pro is the beast designed just for you. Slightly pricey but oh what a monster to own. Check out our “Which Apple Laptop should I buy?” for all the details.

How to choose the best Apple Laptop?

Before you go investing in a really expensive Apple Laptop, you need to make sure that you get the right one. Imagine splurging on the really high-end variant instead of a model that’s more suited to your needs.

There are various factors your need to consider when choosing an Apple Laptop. For example:

Are Macs worth the money?

Simply put, Yes. Macbooks have been around for a while now and have been nothing but brilliant in terms of functionality and power. The reason I say they are worth the high price is due to the fact that they deliver, each and every time the notebook is powered on you’re bound to have the most fluid and flawless experience.

Is it better to buy Mac or Windows?

It entirely depends on whether you’re looking for something affordable with easy upgrade options or for something that will provide you with a streamlined experience and high performance.

Why are Macs so expensive?

It’s simple, the Macbook is not a low-end notebook. The prices of Macbooks are higher than other traditional brands because of the quality of the parts used in the manufacture of the Macbooks. These are high-end machines and while compared to other brands with similar specs, the Macbooks are not far off and are quite similarly priced.

Which Apple Laptop should I buy? 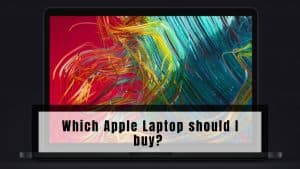 Wondering Which Apple Laptop should I buy? Check out our list for all the details.