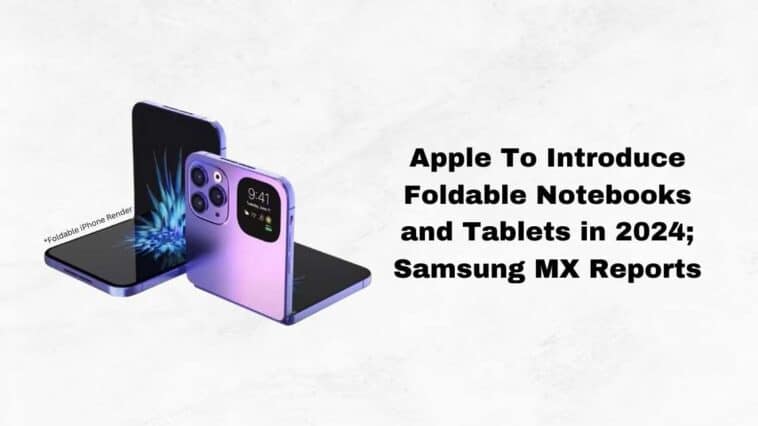 Rumors have been floating around off late that Apple may set foot in the foldable tech space in the coming years and recent reports seem to suggest that the Cupertino tech giant may introduce foldable notebooks and tablets as early as 2024.

According to a report by The Elec, Samsung MX executives met with suppliers over the third week of October to discuss their foldable smartphone strategy. It’s believed that the Samsung MX branch left feeling optimistic about what the future of the foldable device market looks like.

Samsung MX believes that Apple will announce their first foldable device in 2024 and rather than entering the foldable market with an iPhone, Apple might introduce foldable tablets and notebooks instead.

The report that Apple will introduce foldable notebooks and tablets in 2024 comes after Analyst firm CCS Insight forecast earlier last month that Apple may begin experimenting with foldable technology and might launch an iPad with a foldable screen in 2024.

In an interview with CNBC, Ben Wood, chief of research at CCS Insight said,

““Right now it doesn’t make sense for Apple to make a foldable iPhone. We think they will shun that trend and probably dip a toe in the water with a foldable iPad. A folding iPhone will be super high risk for Apple. Firstly, it would have to be incredibly expensive in order to not cannibalize the existing iPhones”

Even Ming-Chi Kuo, a prominent Apple Analyst predicted last year that we could possibly see an iPhone as early as 2024, but he recanted his statement in April of this year as he now believes that Apple may launch their first foldable product as early as 2025.

While many have speculated that Apple may enter the foldable race with a new iPhone, the technology is not there as yet and it would make sense for Apple to explore other options such as tablets and notebooks.

Apple also likes to keep their devices looking sleek and a clunky foldable iPhone will be far from their design ethos.

Also, all the rumors floating around on Apple experimenting with foldable iPhone’s are still rumors that are far from seeing the light of day.