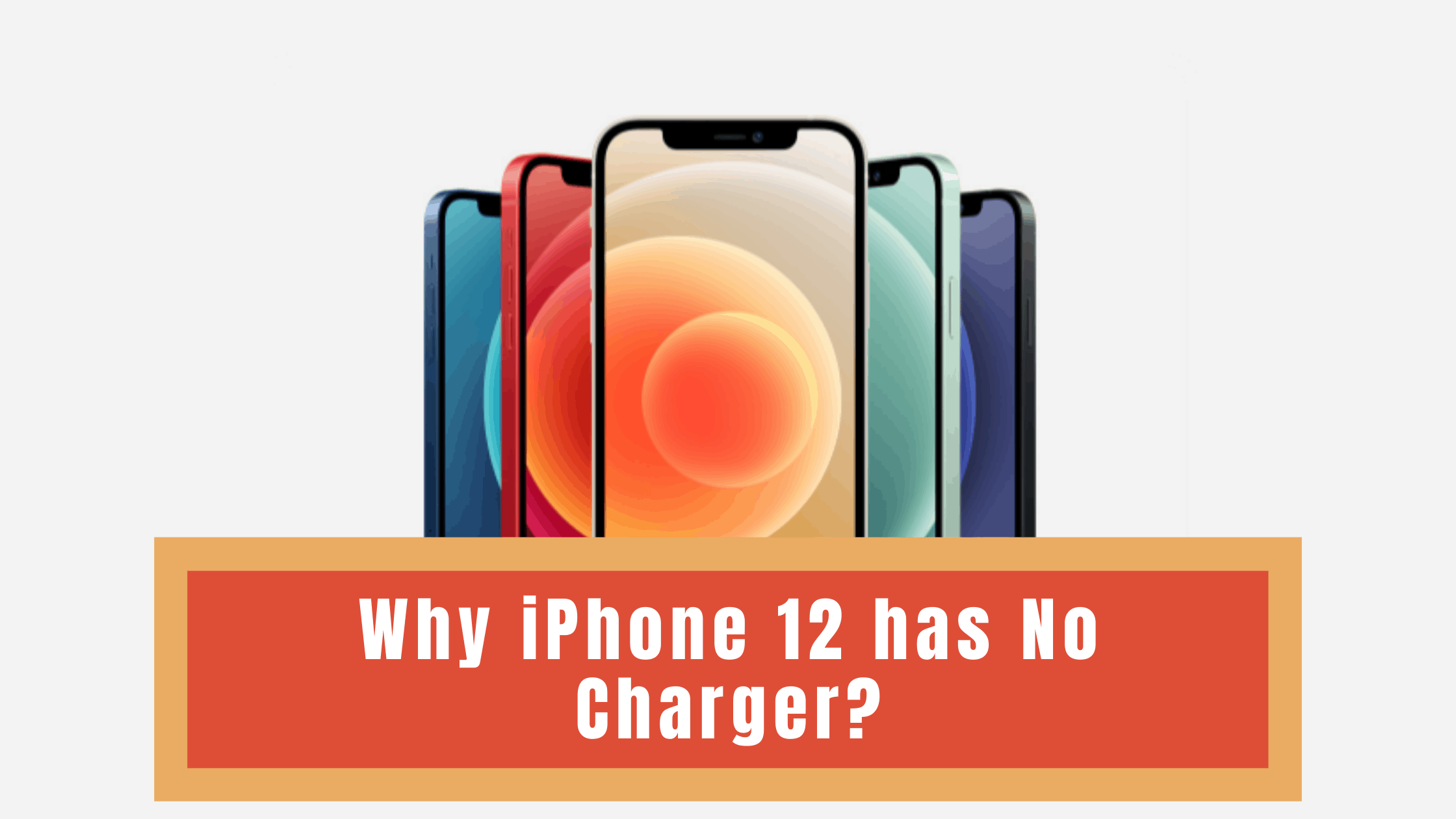 Have you ever wondered Why iPhone 12 has No Charger? Check out our entire guide for all the details!

Apple removed one of the most vital components for a smartphone in its recent generation of iPhones, the charger. Every iPhone up until now, that is the iPhone 12 have included chargers in their box.

I was confused and kind of irked at this decision because I like the charger that comes in the box of an iPhone. So, Why iPhone 12 has No Charger? Read on.

This may be a bummer because the charger that comes in the box of an iPhone is good and reliable. And frankly, I don’t want to pay extra for a new one.

Apple has its reasons and the reason it claims that lead to this change is a noble one. But whether you like it or not, want it or not, need it or not, you will not be getting a charger in the box of an iPhone anymore.

I was left perplexed at why Apple would do something like this, so digging deeper I found that there were multiple reasons. So, in this article, I will be diving deep into why chargers have been removed and how to cope when you don’t get a new charger in your new iPhone.

After having gone through Apple’s official documents and referring to our sources; my team and I found that:

Apple decided not to introduce the charger with the latest iPhone 12 because they wanted to focus on reducing e-waste and packaging materials. Of course, they also wanted to improve their profit margin. However, one of the primary reasons was that Apple wanted this to be their first step towards a wireless charging future.

Why iPhone 12 has No Charger

Why iPhone 12 has No Charger

There is always some reason/s behind any and every move. The reason Apple has provided is that people already have these items.

Kaiann Drance, the VP for iPhone marketing said, “People often already have all that [charger and EarPods]. It’s sitting around in their house. They have multiple ones. And so, it was kind of not the right thing to do in terms of the larger environmental goals and the larger benefits to the environment.”

This also directly benefits the environment. For anyone wondering how removing the chargers from the box of an iPhone helps the environment, read on. Of course, the company also gets to save tons of money. So, it really is a win-win. Here are the reasons as to Why iPhone 12 has No Charger:

This is the more obvious result from not including chargers in the box of your iPhone. Most people probably have chargers lying around in their house that they have no use for, so why do we need more, this is the factor that made Apple green light the idea. So, removing chargers from the box means you will buy one only if you needed one.

This reduces the manufacturing of charger and giving away chargers with every iPhone significantly reducing the e-waste directly associated with chargers. Mobile chargers alone cause to 51,000 tons of e-waste every year.

Apple ships millions of iPhones every year, this means millions of chargers won’t see the light of the day and Apple equates this to removing 450,000 cars from the road which is undoubtedly good for the environment.

Related: iPhone 12 Clone: Where to buy?

If you have not seen the box of any of the new iPhones, that is from the iPhone 12 lineup, you should, because the size of the box is almost reduced by half. It may seem insignificant that the size of the box an iPhone arrives in has reduced. But these boxes are useless once you have taken the contents out of them.

A useless product is a waste now and wastes are a menace to the environment. Now removing the charger reduces half the waste created by these packaging boxes that iPhones arrive in. Also, it reduces manufacturing twice the waste, so a win-win situation in reducing and crippling a source of waste production by half.

Apple might have stated that environmental concern is the reason they are removing chargers but there are other reasons at play too.

This is a rumor, but Apple is heavily rumored to move to a port less iPhone. This means that there will be no wired charging in iPhone 13 if the rumors are true and these rumors almost always turn out to be true. Apple removing chargers from the box and investing on MagSafe only makes the port less and fully wireless iPhone more likely.

MagSafe was initially a term that was thrown around to describe the Apple computers’ charging cable connectors. These connectors were magnetized by Apple so that they could be snapped into the magnetic MacBook Charging ports. Not only was it extremely convenient it also happened to be really safe.

It was considered safe because these magnetic connectors snapped out if it was disturbed or if there was some amount of pressure. So, it would essential protect you laptop from falling to the floor and breaking. Especially, if somebody tripped over the cable.

Now, the latest MagSafe is basically Apple’s response to the Qi wireless Charger. This charger looks like a large coin or a really tiny and slim hockey puck. It snaps on the rear portion of the iPhone and the circular connector is plugged into a power source through a USB-C cable. It directly, chargers the phone at 15W.

And yes, it snaps onto the iPhone magnetically and falls off if there’s some disturbance. So, it’s extremely useful when compared to the classic. adapter.

Anyone can figure that fewer items mean lower costs of manufacturing. And Apple provides you with a USB-C to lightning cable and they have been giving charger bricks with a USB-C port only since iPhone 11 series so if you don’t have an iPhone 11 charger lying around, you won’t be able to use your old chargers with the new USB-C to lightning cable bundled with iPhone 12.

Of course, you can use an older iPhone charger (before iPhone 11 series) to charge your new iPhone 12, but you won’t be able to use the new cable for the same or take advantage of the full 20W fast charging capability. For reference iPhone 11 uses 18W fast charging, iPhone XS series uses 15W charging and lower for previous versions of iPhones.

The best method would have been to give an option for the users opt if they want a charger or not, but there are downsides for that too as who wouldn’t say no to one. Xiaomi is doing with its Mi 11 lineup, which is great for the consumer. Apple could have also offered discounts for customers opting out of chargers but that is a disadvantage for Apple as it reduces profit margins.

So, all things considered this is a benefit for Apple too as they don’t have to sell chargers with iPhones anymore, and if you have to buy a new one you will have to pay extra. So, the extra profit is arguably going to Apple. You won’t be getting chargers even in the older models like iPhone 11. If it was the only environment, we would be getting 19$ off the price of an iPhone 12, as 19$ is the cost of a new Apple Charger.

iPhones are not manufactured in a single country and this means Apple has to ship them to different countries for sale. Reduction in packaging and weight due to the removal of the charger means that cost of shipping reduces for Apple. Remember, that Apple ships millions of iPhones every year so it is a significant chunk of money.

How Do I Charge the iPhone 12?

One of the things we really wanted to see was the a charger with a USB type-c charger. So, when the new iPhone 12 launched last year without a charger, we were quite confused. The lack of the actual brick was more or less fine. But it still had a lightning port. Although, it was quite irritating, it was still a blessing. Primarily because you can use any USB-A power adapter.

Of course, there are other options that you can resort to after buying a new iPhone for charging it, they are:

Use an old charger iPhone charger – This is probably the most obvious thing to do as even Apple said there are a lot of chargers with many people making rendering new chargers pointless unless you absolutely need them.

And what if you have never had an iPhone before or the only the iPhone charger you had doesn’t work anymore, this sets us up for the next alternative.

Buying a new charger – If you want the best of charging speeds for your new iPhone 12, you will have to buy a new charger, either from Apple for 19$ or a supported charger manufacturer.

Don’t cheap out on chargers as they are vital to the phone’s battery performance, so go for Apple Chargers or other reputed brands. Maybe you prefer convenience more than speed, then you can go for the third alternative.

You can buy a MagSafe charger from Apple for 39$ or any supported Qi charger from a reputed brand.  Apple seems to be investing in new and fast charging MagSage chargers that can support all future iPhones.

So, if you are buying the new iPhone 12 series you have to remember that you will not get any charger I the box and you might have to shell out extra for new ones. But if you are fine with using an older charger that’s great because whether you like it or not, you are helping the environment.

And if you want the best that Apple has to offer, you will need a new charger for the fastest charging speeds or the convenience of MagSafe. Check out our entire guide on Why iPhone 12 has No Charger? for all the specific details.

Why iPhone 12 has No Charger? – Future

The future is that for better or worse wired chargers are on their way out of the box, at least on the premium end of the smartphone market. It is an industry trend that other manufacturers follow when Apple starts something, remember the headphone jack?

And now the charger that comes in the box. Xiaomi removed it from their Mi 11 lineup and even Samsung have removed it ironically from the S21 lineup after mocking Apple doing it first.

And Apple is right in doing so as chargers do cause a lot of e-waste and take up a lot of space in the box. I just wish it was handled better like in the case of Xiaomi as they offer the option to include a charger for free if needed because not everyone has a fast charger lying around. But all things considered it is a step in the right direction.