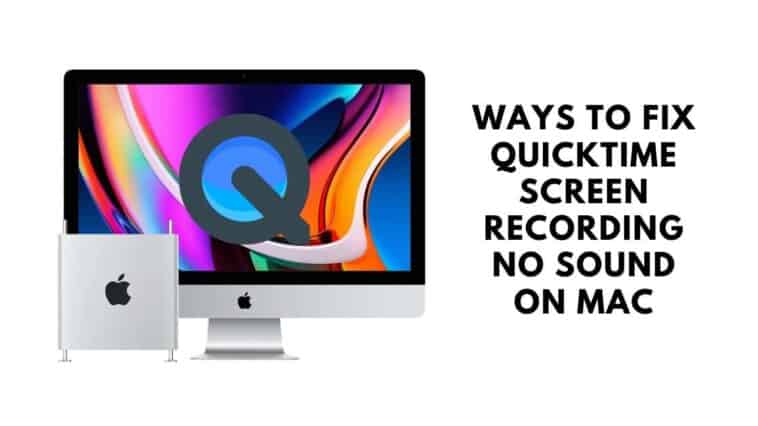 Have you ever faced sound related issues while recording your Mac’s screen using QuickTime?

I have and it’s one of the most annoying things ever. In fact, I used QuickTime to record a couple of my online classes at the start of Covid and when I referred to the recordings a few weeks ago I found that the screen recording was only a video of the classes sans any audio.

Now I’ve recorded my screen countless times before and have never faced this issue before, so I assumed that it was most likely an isolated incident and began looking for a fix.

Of the many different fixes I came across online, these five seemed to do the trick for me and helped rectify my screen recording issue.

So, if you’re facing a similar issue and would like to learn more about Ways to Fix QuickTime Screen Recording No Sound on Mac, then read on to find out what causes this problem and how you can fix it on your own.

Here’s a quick rundown on how you can fix a QuickTime screen recording with no sound on a Mac.

5 Ways to Fix QuickTime Screen Recording No Sound on Mac

Why Does My QuickTime Recording Not Have Sound?

QuickTime is a native tool on Mac’s that you can use to record audio and video from your Mac for free.

While you might not expect Apple’s software to come with issues, it’s quite common and people have reported facing problems with QuickTime over the years.

Regardless of whether your Mac is new or old, here are some of the most common causes of a QuickTime recording not having sound that I was able to come across.

The only good thing about these problems is that they’re all fixable and with a couple of easy tweaks in the software you will be able to record your screen with audio using QuickTime.

Read on to learn how to fix QuickTime screen recording no sound on Mac.

Fix 1 — Check the Microphone Permissions on the Mac

The first and easiest fix to the screen recording issue with no sound is to check if QuickTime has microphone permissions granted.

To grant microphone permissions to QuickTime on a Mac, follow these steps.

If QuickTime has been granted microphone permissions and you’re still unable to record audio then you can check QuickTime’s internal settings and see if the right input source is selected.

The steps to check your QuickTime settings on a Mac depends on your Mac’s OS.

For those using Catalina or later

For those using Mojave or earlier

If the second fix doesn’t work on your Mac, it’s most likely an issue with the microphone settings and it’s time to test the microphone and see if the volume levels are set correctly.

Apart from checking the system settings and QuickTime settings, another quick fix is to check the microphone settings on the Mac.

Sometimes it might also be caused by headphones and the system is not rerouting the audio output properly.

Luckily, both ways can be easily fixed.

Your recording will not carry audio if you’re wearing headphones and the internal microphone is set as the primary device.

To capture audio in your screen recording your sound output device needs to be set to the internal speakers or external speakers.

Turn up your speaker volume and you’ll be able to record your screen with audio. However, if it doesn’t work and if you’re using an older version of macOS, try the next fix.

On macOS Mojave or earlier, the older version of QuickTime comes with a built-in Ambient Noise Reduction function.

While it’s built to focus primarily on voices and block out background noise, it can tend to get the two mixed up and the only way to go about fixing this issue is by disabling the “Use Ambient Noise Reduction” feature from the Sound input settings.

The final fix if all the rest don’t seem to work will be to reset the Mac’s temporary settings or NVRAM.

Resetting the NVRAM will command the Mac to forget any system settings that were stored earlier and to start the system afresh.

This fix doesn’t involve getting rid of your data or personal files, but it will reset your Mac to its default settings and should fix the QuickTime Screen Recording No Sound on Mac issue.

If the lack of audio in your screen recording was caused by a bug in the software or macOS, then none of the fixes mentioned above will work.

The only way you will be able to fix the no audio issue will be to check if there’s a software update for QuickTime and macOS.

Generally, when an application is infected with a bug, the  only way out will be to download the bug fix that Apple will release in the next update.

I hope that these fixes have helped you fix the QuickTime Screen Recording No Sound on Mac issue and you are now able to record your screen with sound.

These 5 fixes helped me out and all my QuickTime screen recordings now have sound.

You can also refer to our other guides in case you’re facing other issues such as the ones mentioned below.