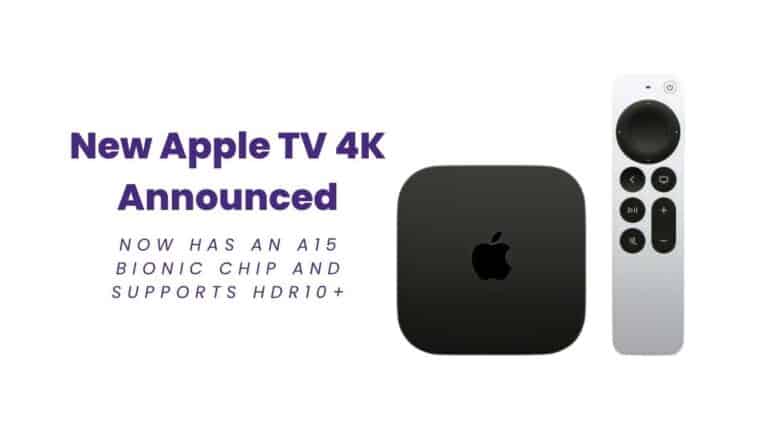 On Tuesday, alongside the new iPad Pro and iPad 10, Apple announced two versions of the new Apple TV 4K running the A15 Bionic processor, with multiple storage options and networking capabilities.

While the new Apple TV 4K receives no major upgrades to its design and it resembles the older 4K TV, the only change we noticed was the word “TV” missing from next to the Apple logo on the top of the device.

The biggest overhaul however is the new processor in the Apple TV 4K. Apple revealed that the new TV 4K will use the A15 Bionic processor, the same chip that’s currently powering the iPhone 13.

Now this is a significant improvement from the previous model which had the A12 Bionic chip.

Apple claims that the new CPU in the TV 4K is expected to perform up to 50% faster than the previous model and the GPU will also be 30% faster, thereby delivering better performance while playing games, navigating through tvOS and generally watching content.

“Apple TV 4K is the ultimate way for Apple users to enjoy their favorite entertainment on the biggest screen in the home, and now it is more powerful than ever. The new Apple TV 4K is unlike anything else out there, given its seamless connection to other Apple devices, ease of use, and access to amazing Apple content. It offers something for everyone in the family to love.”

Another significant update to the Apple TV 4K is the inclusion of HDR10+. This means that compatible TVs from Samsung and TCL will now be able to play content in HDR10+ and users can experience brighter and crisp visuals with a more fluid frame rate.

The new Apple TV 4K also received an upgrade in terms of storage space and the base model now comes with 64GB, an improvement from the 32GB storage space available on the previous gen Apple TV.

The premium model on the other hand will be equipped with 128GB storage space and offer Gigabit Ethernet as well as Thread Networking.

Apple’s new TV 4K is currently available to pre-order online and will hit stores on the 4th of November. Prices start at $129 for the base mode and $149 for the premium model with Wi-Fi.

On another note, Apple also made changes to the Siri remote and the new model has received a USB-C port that signals Apple’s move away from lightning port.

While there wasn’t any reason given for the change, it’s clear that they are trying to transition most of their products to USB-C as soon as possible.

The Siri remote ships alongside the Apple TV 4K on November 4th, but it can also be purchased separately for $59 starting October 21st.