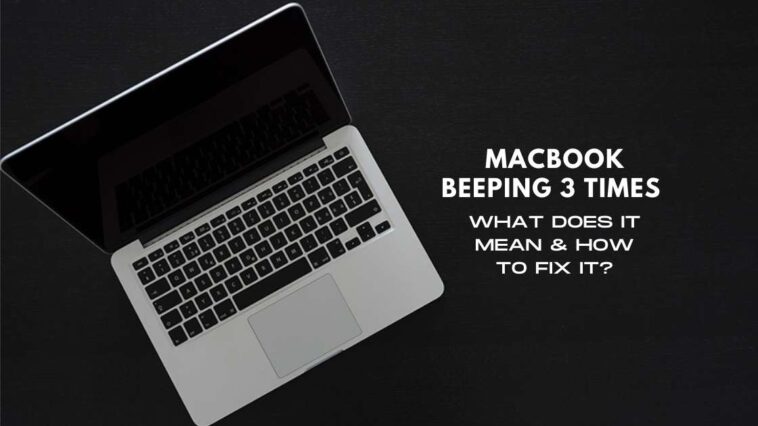 Is your MacBook beeping 3 times and you’re not sure of what to do?

If this is the first time you’re facing this issue, don’t fret because there are a couple of fixes available that can get your MacBook up and running again.

But what do the 3 beeps signify? Is it something serious? If so, can it be fixed?

Read on as I cover everything in detail and show you how to fix your MacBook if you’re stuck on the boot screen with a frequent beeping sound emanating from the device.

What Causes the MacBook to Beep 3 Times?

If you hear three beeps from your MacBook then don’t confuse them with the chimes that play during the startup.

At times three beeps could be a signal that something is wrong and there’s an issue with the startup process that’s preventing the MacBook from booting successfully.

However, the whole three beeps issue doesn’t happen to everyone nor is it a global phenomenon.

In fact, the three beeps that play continuously while booting up a MacBook only occurs when there are issues with the RAM and when there’s significant physical damage which has resulted in the RAM getting damaged or popping out of its slot on the MacBook.

There are other possible causes, but these depend on the sequence of the beeps from the MacBook.

How to Fix MacBook Beeping 3 Times?

While most times three beeps from a MacBook is nothing to worry about, the time you should be concerned about is when the beeps come with 5-second intervals.

This means that the RAM is faulty and your MacBook will not boot until the RAM is either repaired or upgraded.

There are a couple of fixes that you can first attempt on your own before having to replace the RAM which i’ll cover below.

These easy but sure shot solutions should help you get your MacBook up and running in no time.

The SMC on your Mac is essential for supplying power to all the hardware and components.

The first fix you can try will be to reset the SMC on your MacBook, but mind you, this solution won’t work for M1 Mac owners as Apple’s M1 processor does everything an SMC did on older Mac’s.

Upon resetting your SMC, try booting the system in the normal way and check if the error is gone and there’s no more beeping sound.

If not, move onto the next fix and see if resetting the NVRAM will work in your favor.

Resetting the NVRAM is again impossible to perform on the M1 Mac simply because if there’s anything wrong with the non-volatile random access memory then the M1 processor will reset it automatically.

For those still using Intel-based MacBooks,

Remember, once you reset your NVRAM on the MacBook, system settings you’ve configured will be wiped out such as the date and time and sound or display settings.

If resetting your NVRAM didn’t do the trick then it’s time you use the built-in Apple diagnostics tool and have it scan the MacBook to determine the cause of the beeps.

There are two ways you can access Apple Diagnostics, both methods depend on the type of processor your MacBook is running.

Once Apple Diagnostics has completed the scan you will be able to see a diagnostics reference code on the screen that will indicate what the underlying issue is.

If you’re presented with any of the following codes then you will have to take the MacBook to the nearest Apple Store or Genius Bar and have the support staff take a look at the device.

Now, not all MacBooks come with the option to upgrade the RAM and most of the new models of the Air, Pro and Mini come with RAMs that are soldered to the motherboard making it rather difficult to remove them or have them replaced.

Some older MacBooks do have user-upgradable RAM options that let you add RAM to the current configuration by simply installing a new RAM module.

In order to check what type of motherboard your MacBook comes with and if there’s an option to upgrade the RAM, head over to the Apple Menu icon in the Menu bar and then tap on About This Mac.

Now, locate the Memory tab from the page and if it shows you a layout of RAM slots with some grayed out then your system can be upgraded as the gray slots signify spaces that are empty and a compatible RAM module can be installed there.

Once you’re done upgrading your RAM, boot up the MacBook and see if the beeping sound persists.

If the fixes mentioned above didn’t work in your favor then the only option left is to get in touch with Apple Support or book an appointment at the Genius Bar.

The tech team at the Genius Bar will be able to take in the MacBook and check what’s causing the beeping sound.

You can also explain to them all the fixes you’ve tried to get the MacBook working so they don’t waste time trying to do the same thing you did earlier.

Once they accept the submission you should receive your MacBook in around 24 hours, but if there’s significant damage then it might take a little longer than a week as the MacBook will have to be sent to another center.

How do I fix 3 short beeps on my MacBook?

Try rebooting your MacBook first. If the issue continues then attempt resetting the SMC, NVRAM and then run Apple Diagnostics on the device before taking it to the Apple Store.

Can I reset my MacBook RAM?

Yes, you will be able to reset the RAM on your MacBook by pressing the Option + Command + P + R keys on the keyboard while the MacBook is booting up. Release the keys when the Apple logo disappears for the second time to complete resetting the RAM.

My Mac has a black screen and it’s beeping, what to do?

If your Mac or MacBook is beeping and the display is black then there’s either an issue with the RAM module or the device has a firmware/software issue that’s preventing the Mac from booting successfully.