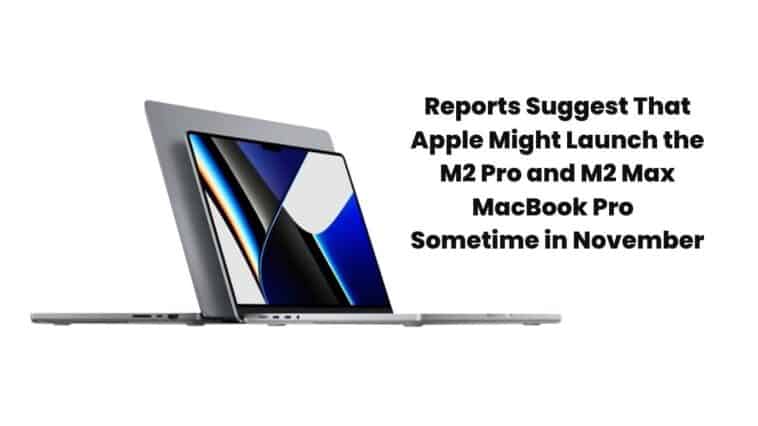 While we saw the introduction of a number of new devices like the iPhone 14, iPad Pro, and Apple TV 4K over the last couple of weeks, it doesn’t look like Apple is done just yet.

New reports have surfaced which suggest that Apple might release the new M2 Pro and M2 Max MacBook Pro sometime in November via press release.

The MacBook Pro received a major overhaul last year and given that it’s a new design, Apple won’t consider changing the build or form factor for the next couple of years.

However, while there might not be many changes made to the design of the MacBook Pro, we can expect the biggest upgrade to be improvements to its processing capabilities.

The M2 Max is expected to come with a 12-core CPU and a 38-core GPU whereas the M2 Pro will be slightly less powerful.

According to the latest Power On newsletter, Bloomberg’s Mark Gurman wrote that Apple is yet to announce the new MacBook Pros and we can expect the launch to take place over the next couple of weeks, or as soon as November.

“While the new MacBook Pros are on track to launch in the near future, I wouldn’t expect them to be released alongside the iPad Pro. The company has historically launched new Macs in November, as was the case in 2019 with the initial 16-inch MacBook Pro and in 2020 with the first Apple Silicon-based MacBook Pro, MacBook Air, and Mac mini.

Speaking of new products, Apple is working on an M2 version of the Mac mini, which will be the first update to the company’s smallest Mac in two years.”

Gurman also noted that the new M2 Pro and M2 Max chips will focus primarily on graphics performance and along with the new M2 powered 14-inch and 16-inch MacBook Pro, we may also get to see a new M2 Mac Mini.

The new M2 Mac Mini will be the first update to the company’s smallest Mac in over two years.

While it was first reported that Apple might use their October event to unveil the new MacBook Pro along with their iPads, sadly this was not the case and we only got to witness the new iPad Pro and 10th-gen iPad get launched.

This means that there will definitely be another launch over the next few weeks, and much like their October event, Apple might consider releasing the M2 Pro and M2 Max 14-inch and 16-inch MacBook Pro and the M2 Mac Mini via press release.

Even serial leaker, LeaksApplePro seems to agree to the fact that there’s a November event on the way and there are a few more new products Apple is yet to release.