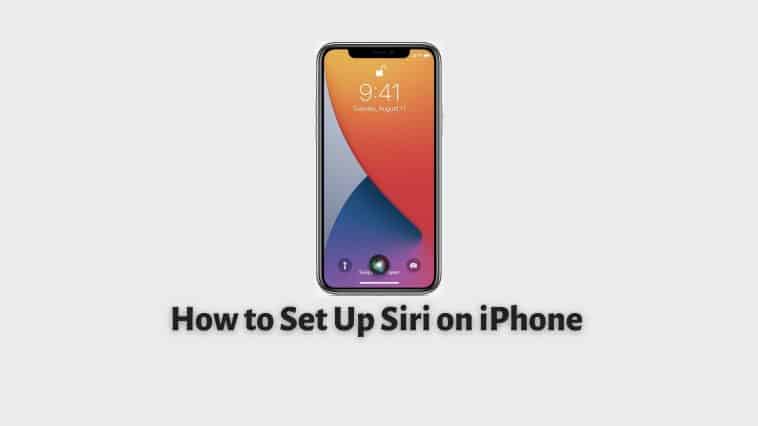 Want to use Siri? you need to set it up first. Learn how to set up Siri on iPhone in this guide.

Whether you like it or not, Siri is the default voice assistant for your iPhone. While it doesn’t rank high in my ranking of voice assistants, it is still functional and has features that you can use to make your life easier.

Siri on iPhone works seamlessly and comes with good functions and features like getting directions, controlling your iPhone, playing music, and more. But to take advantage of all these features, you may need to do some fiddling around in the settings. Don’t worry though, most of the fiddling around is simple and anyone can do it.

This article is a step-by-step detailed guide on how to set up Siri on iPhone. Read and follow the steps carefully to get the most out of Siri on your iPhone.

How to Set Up Siri on iPhone

How to Enable or Disable Siri

When you first set up a device like iPhone, iOS will prompt you to enable Siri.

In case you forgot or didn’t enable Siri when setting up your iPhone, you can activate Siri from Settings. You can also disable Siri if needed. To do these, follow the steps below,

Step 2 Scroll down to Siri & Search and then tap on it.

Step 3 Tap the toggle to Activate or deactivate Siri next to Listen for “Hey Siri”.

Step 4 Activate the toggle next to Press Side/Home button, this lets you access Siri using the Side or Home button.

Step 5 Now, tap on the toggle next to Allow Siri When Locked to access Siri even when your iOS device is locked.

Once you have done this, you can start using Siri on your iPhone.

How to Set up Voice Activated “Hey Siri”

If you want to activate Siri by saying “Hey Siri”, follow these steps,

Step 2 Scroll down to Siri & Search and then tap on it.

Step 3 Toggle on the Listen for “Hey Siri” option.

Step 5 Follow the on-screen instructions and say each command on the screen and then tap Done.

Now you can say “Hey Siri” to summon Siri.

How to Use Siri

Using Siri is straightforward once you have enabled it using the above methods. To use Siri, follow these steps,

Step 1 Depending on your device, press and hold either the Home or Side button on your iPhone or iPad, or you can also say “Hey Siri” to initiate Siri.

Step 2 Now, you can command Siri or ask Siri a question.

How to Change Siri’s Accent and Voice Style

If you are not a fan of the original Siri voice, you can change the accent and voice style that you prefer better. For now, there are a few accents, hopefully, we get more in the future. To change Siri’s Voice, follow these steps,

Step 1 Open up the Settings app on your iPhone.

Step 2 Scroll down and tap on Siri & Search.

Step 4 Choose an accent by tapping on them, you can choose from American, Australian, British, Indian, Irish, or South African. You can also choose between male and female Siri voices.

Step 5 Now, choose the voice style, you can choose from four-voice options.

How to Change Siri’s Language

You can also access Siri in a different language, you can change Siri’s language by following the below steps,

Step 3 In here, tap on Language.

Step 4 Choose the language you want Siri to speak and respond to and tap on it.

Now you will be able to communicate with Siri in your preferred and chosen language.

How to Customize Siri’s Responses

You can customize and control the way Siri responds you can leave Siri always on, or show captions and more. To customize Siri’s responses, follow these steps,

Step 4 Choose an option from:

Step 6 If you want to see transcriptions of your conversations with Siri, toggle on the Always Show Speech option.

How to Edit a Siri Command/Question

When you turn on the Always Show Speech option in Siri Responses, you can get transcriptions of all your conversations with Siri. You can even edit these transcriptions so that Siri can understand you better.

This is helpful as you don’t have to repeat entire sentences and instead just edit the word or phrase that was wrong.

Step 1 Activate Siri by holding the Home/Side button for a few seconds, you can also summon Siri by saying “Hey Siri”.

Step 2 Now, ask a question or give a command to Siri.

Step 3 Your question/command will be displayed as text at the bottom of the screen, tap on this text.

Step 4 Now, you can edit the text to your liking if there were any mistakes.

Step 5 Tap on Done and Siri will answer the revised question/command.

Siri can read information from the contact cards of your iPhone, allowing it to perform actions like “Give me directions to home” or “Call Mom.” For this to work optimally, you need to tweak Siri’s settings a bit and you can do this by,

Step 2 Scroll down and choose the Siri & Search option.

Step 3 Tap on My Information.

Note that if you want personalized commands for your friends, family, and more, you should create relationships for their contacts as well.

Siri can be activated using the Home/Side button even from the lock screen and so this can be a security risk. So if you want to truly keep your iPhone secure, you can set a Passcode Lock for your iPhone which in turn can lock Siri access without the Passcode.

This may not be convenient, but it is necessary for security and privacy. To do this, follow these steps,

Step 4 Now, scroll down to the Allow Access When Locked section. Here, tap on Siri, this will deny access to Siri when your device is locked.

Now, Siri can’t be accessed from the lock screen improving your iPhones security.

Step 1 Activate Siri by pressing and holding the Home or Side button of your device, or by saying “Hey Siri”.

Step 3 Siri will try to understand your command and change the required setting.

You can now adjust your iPhone’s general settings using Siri without touching your iPhone.

How to Type Instead of Speaking to Siri?

Type to Siri is a function that’s designed for people who are unable to verbally command Siri because they’re in a crowded space or someone who is unable to speak.

See also  How To Screenshot From A Logitech Keyboard in 2022 | All You Need to Know!

But in order to use the type to Siri function, you should first enable the feature on your iPhone or iPad.

To enable Type to Siri;

When you enable type to Siri you will be able to type your command after you activate Siri by either saying Hey Siri or by clicking on the designated button to open Siri.

You can then type out queries such as “What’s the weather today” or “What movies are playing near me” and she will provide you with a response as usual.

What to do if Siri Doesn’t work on your iPhone?

There are a number of reasons why Siri might not work on your iPhone, but no matter what the cause is, they can all be rectified with a few simple steps.

How to Set Up Siri on iPhone – Conclusion

These are the basics when it comes to setting up Siri on your iOS device. There isn’t much more you can do to change your experience with Siri. This article is a guide on how to set up Siri on iPhone, how to change its settings, language, and more.

In case you have another Apple device like iPod Touch or iPad, most of the above methods and settings will work for them too. So, there you have it, you now know How to Set Up Siri on iPhone and get the most out of it, just make sure to follow the steps carefully.