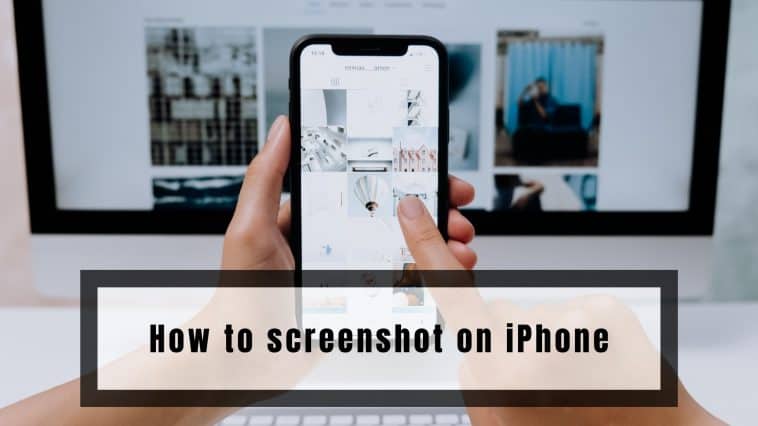 Screenshots can really help if you want to capture media or text with a short lifespan like a PowerPoint presentation side. Most importantly, it can also help you share important information with friends and family before they are deleted. For example, live scores, conversations, and much more. So, How to screenshot on iPhone? Read our entire guide for all the details.

Related: How to Make the Apple Logo Glow?

In addition to the above uses, screenshots can be really versatile. Especially, if you want to send proof of payment, IT errors, even tutorials for your friends.

Taking a screenshot is actually rather simple, you simply press the right-side button and the volume up button. However, it does vary depending on the model. While this method works for iPhones X to the latest iPhone 12, it doesn’t work for the iPhone 8 and earlier versions. So, Check out our guide on How to screenshot on iPhone for all the details.

After having reviewed all of Apple’s official documents and after having referred to our credible sources; my team and I found out that:

There are multiple ways to take a screenshot on iPhone. The most common method is pressing the Right Side Button+Volume Up Buttons simultaneously. However, these work only on the latest iPhones. If the user’s iPhone is 8 or older, then the best method would be to press the Home button and the Sleep button simultaneously.

Related: How to Create New Apple ID on iPhone in 2021

How to screenshot on iPhone

The Right Side+Volume Up Buttons and the Home+Sleep methods are the most common ways of taking a screenshot on an iPhone. The only major difference is that the Home+Sleep.wake method is only possible on iPhone 8 and earlier as these iPhones have the home button.

Fortunately, both methods ensure that the screenshot is saved to your camera roll. So, you don’t have to go digging in a hidden folder.

It is also important to note that you need to be quite quick when taking your screenshots with the latest iPhones. If you press the buttons for too long, the iPhone will show an option to switch off.

And If you still keep holding, you’ll accidentally activate the Emergency SOS feature. Which can become a huge issue. So, the best thing to do is quick simultaneous press. If you seem to struggle with these methods. There’s no need to worry as there are more alternatives.

Related: Does iPhone 12 have Dual SIM?

The One Button Alternative is the perfect alternative to the Home+Sleep” option of capturing a screenshot. All you have to do is head to general settings and turn on an Accessibility Option that essentially creates a floating button on your screen that captures a screenshot with just a tap.

Now, a lot of third party app platforms offer similar features. However, it’s always better to use the devices in-built feature instead of download an app that potentially reads your data and contributes to more space.

Additionally, this floating button can actually be moved around the entire screen based on your convenience. What’s truly brilliant is that when it’s not in use, it simply fades away. However, it doesn’t completely disappear, in case you need it.

Most importantly, this method also helps if the sleep button if broken or inaccessible due to your iPhone case.

Related: Can I use UK iPhone in USA?

There are a ton of screenshot apps out there on the Apple Store that can help make the process of taking a screenshot easier. Additionally, these apps come with a bunch of integration or features that make sharing it or edit it much easier. So, if you’re tasks require your to take a lot of screenshots, then we recommend you get a screenshot app.

For example, WebCapture is a popular screenshot app for iPhones and iPhones. However, it specializes in capturing screenshots of websites and it has a simple UI/UX. All you have to do is open the app and it opens as a browser where you type in the URL of the website you want to take a screenshot of.

Once you type it in, it will automatically take the screenshot and send it to your camera roll. There’s no editing or cropping involved and the best part is that there are no toolbars or complicated menus.

Similarly, you’ll be able to find a lot more screenshot apps that are either generic that shows up as a bar on your screen or extremely task-oriented like WebCapture. Check out our guide on How to screenshot on iPhone.

Well, this one isn’t technically a screenshot but it does help you save or download individual images on a certain page. Where screenshot capture everything on the screen, this method would let you pick and choose as to which images you want to save.

All you have to do is touch the images or element and hold on to it till a pop-up box appears with various options. Now, choose the Save Image option if you to download the file onto your iPhone.

You cal also choose to send it to somebody via email. All you need to do is choose a copy and attach it to an e-mail. This won’t download the option onto your device saving you space.

Using Siri to take a screenshot

If your fingers are tied up or if you don’t want to manually press any buttons, then you can always command Siri to do it for you. As a voice assistant, Siri does have the feature where it can take a Screenshot for you.

All you have to do is first navigate the screen manually to the page you want to screenshot. And then you simply command Siri: : Hey Siri take a screenshot. And boom, you’ll find the image in your camera roll.

How to take a screenshot on iPhone X and Later

When Apple incorporated Face ID with iPhones, it essentially became more difficult to screenshot using the home button. Especially since Apple Removed it from iPhone X and Later. However, they did leave a way out. All you have to do is:

How to take a screenshot on iPhone 8 and earlier

Fortunately, all iPhones from 2007 to 2017 use the same methods to capture screenshots. So, you don’t have to worry about the new methods of taking the screenshot even if your iPhone iOS is updated to the latest version. Surprisingly, even the iPhone SE 2020 which has Touch ID also uses this method. So, it’s still relatively convenient.

See also  How to Use Network Utility on Mac in 2022

Here’s how to take a screenshot in iPhone 8 or earlier:

Now, since these iPhones are quite old you might still be using an older iOS version. If your iOS is 10 or earlier, then the screenshot will be saved in the All Photos folder. Depending on whether you’re using the iCloud Photo Library, you can even find in it the Camera Roll section.

How to view and edit screenshots

Once you’ve taken the screenshot, you’ll want to view, share or edit it. So, start by heading to your Photos app, All your screenshots are automatically going to be saved here.