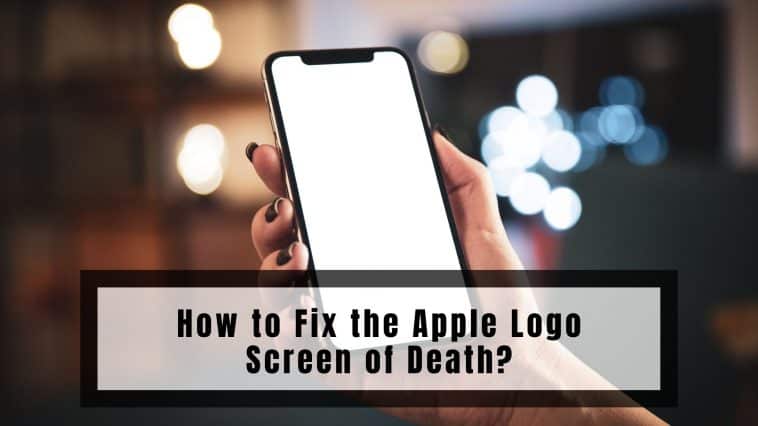 If your iPhone has a frozen white screen, then check out our guide on How to Fix the Apple Logo Screen of Death for all the solutions!

Related: iPhone Stuck in DFU Mode: How to Fix

Even the greatest can falter though, bugs and glitches will always be present no matter what just because of the sheer amount of code that is running on modern smartphones, and the iPhone is no exception to it.

After having reviewed all of Apple’s official documents and having referred to our credible sources; my team and I found that:

The best solution to fix the Apple Logo screen of death is forcefully restarting the device. To forcefully restart the latest iPhones, the user has to do is press the volume up button for a couple of seconds and immediately press the volume down for the same amount of time. Then the user must press and hold the power button for 10 seconds to restart the Apple device.

How to Fix the Apple Logo Screen of Death

How to Fix the Apple Logo Screen of Death?

This is more like a preliminary check which won’t solve any software issue or bug with your iPhone. While it won’t solve the Apple Logo screen of death issue, it will resolve if you have on-screen magnification turned on by mistake.

You may have zoomed in on something white, which can seem like the white screen of death issue. When this happens, tapping on your screen won’t help. To fix this, you have to double-tap your iPhones screen using three fingers at the same time. If your screen was magnified, it will make it normal.

See also  Message Blocking is Active on iPhone, What does it Mean and How to Fix in 2022

Once your screen is normal, open Settings on your iPhone, go to General, then Accessibility, Zoom and turn Off Zoom. This will disable on-screen magnification so you won’t get stuck again.

When an electronic device is malfunctioning or facing an issue, it is safe to say that a quick restart will probably fix it as long as it is not a big issue. Restarting an iPhone will fix the White Screen of Death issue if it was due to a glitch or bug.

But since the device gets unresponsive during the White Screen of Death, you will have to do something called Force Restart. And force restart can vary between different iPhone models, follow these methods to force restart your iPhone based on the model.

One these iPhone models, press the Volume Up button for a couple of seconds and release it, then quickly press on the Volume Down button for the same amount of time.

After letting go of the Volume Down button, press on the power button for about 10 seconds, now the Apple logo should appear and you can let go of the button. This will prompt the restart and your iPhone will reboot.

How to Force Restart an iPhone 7

Hold both the buttons until the Apple logo appears, you can release them now and your iPhone 7 will restart.

If the White Screen of Death issue persists after force restarting your iPhone, you can try using Recovery mode to reinstall iOS. For this, you will need a Mac or PC and your iPhone charging cable.

To enter your iPhone’s Recovery mode, plug your iPhone into your Mac, open Finder, and select your iPhone from the sidebar. The next steps will depend on the model iPhone you have so follow carefully:

To enter the recovery mode on these devices, you must follow the same steps you did when trying to force restart your iPhone.

Now, go back to your Mac and you will be given options to choose from: Update or Restore. Click on Update and your Mac will try to reinstall iOS on your iPhone, but it will save all your data and files, so you don’t have to worry.

iPhone 7 or 7 Plus Models

First, connect your iPhone to your Mac. Now on your iPhone, press and hold the Volume Down and the Power button simultaneously for a few seconds till the Recovery mode appears. Now go to your Mac and select the Update option to reinstall iOS on your iPhone.

If you can’t get your hands on a Mac running macOS Catalina or later, you can use an older Mac or a Windows PC to boot your iPhone into Recovery mode. You need to have iTunes installed on the older Mac or the Windows PC.

Now connect your iPhone to the PC or Mac using your charging cable and then launch iTunes on the PC or Mac. Here, you should be able to see your iPhone appear at the top of the screen as an icon, click on this icon to open the iPhone page.

If you have attempted to use recovery mode to reinstall iOS and that didn’t rectify the problem then why not try factory restoring the iPhone instead.

This method is recommended only to those who have already taken a backup of their data and have exhausted all the other options to fix the device and get it out of the white screen of death.

To factory restore the device, enter Recovery mode and then instead of reinstalling iOS or updating it, choose Restore and wait for the device to get restored to its factory settings.

This fix will work if the white screen was caused by transferring corrupted files through iCloud or if you’ve recently updated iOS and there’s a bug.

In case both force restart and recovery mode were of no use to you then you can try entering Device Firmware Update (DFU) mode. This is similar to recovery mode but it doesn’t even boot or load iOS yet your iPhone can communicate with iTunes or Finder.

DFU method can restore your iPhone to its original settings and then using iTunes or iCloud, it backups and reloads all your data onto your iPhone for a fresh install.

Entering the DFU mode is not an easy job thanks to the number of button combinations you need to master correctly. It is tricky but you will get it right after a few tries.

This method is for the iPhone 8, 8 Plus, X, and later models. Connect your iPhone to your PC/Mac using the Lightning cable, launch iTunes or Finder and click on the iPhone icon. Now, press the Volume Up button for a few seconds and let it go, then press on the Volume Down button and let it go. Now press the Power button for a few seconds and the screen will go black.

Keep holding the Power button on the side and at the same time press and hold the Volume Down button. Count to five and then release the Power button, but hold on to the Volume Down button for approximately 10 more seconds. The screen should remain black throughout this process, if the Apple logo appears then it means you have booted into recovery mode which is not what we want.

To leave DFU mode, use the button combination for your which would put it into recovery mode.

If none of the above methods worked then, it is probably a hardware issue that needs professional help. It could be a loose cable inside your iPhone or a damaged component. Either way, if it can’t be fixed using the above methods, then book a visit to the Genius Bar and they will fix it for you.

How to Fix the Apple Logo Screen of Death? – Takeaway

The White Screen of Death issue can be very irritating when it occurs, it locks you out of the phone then, makes it unresponsive, and renders it completely useless. But there are fixes for it especially if it is a software issue.

These fixes are also easy ones that anyone can attempt from home as long as you have a PC/Mac. The above guide should have helped you fix the White Screen of Death for your iPhone. If not, you can always go to Apple, who will fix it for you.

What Causes the White Screen of Death?

A hardware issue causing the White Screen of Death can be sometimes easily fixed, and sometimes it can’t be like when the internal components are damaged.

Imagine if your iPhone undergoes sustained impact, then there is a chance that connectors inside could be disconnected or components inside could be damaged. If that happens then you will need to get professional help. Check out our entire guide on How to Fix the Apple Logo Screen of Death for all the details.

How to Avoid the White Screen of Death?

While not everyone may face the white screen of death on their iPhone, the problem is quite common and luckily there are some things you can do to prevent your iPhone from getting stuck at the boot up screen.

Trust me when I say, a little love and care will help keep the iPhone safe and functional at all times.

Do these fixes work with iPad or iPod?

Yes, the Apple logo screen of death is not an issue only faced by iPhones. Even iPads and iPods can be vulnerable to this. But fortunately, you can follow the same fixes that are mentioned above to fix this.

What are other similar problems to the Apple logo screen of death?

While the problem is almost definitely a firmware issue, it can show up in different ways. For some users, their iPhone screen turns completely black, while for some it is the Apple Logo screen of death. In other cases, some users are faced with a solid white screen of death. All these are the same issues and you can use the above fixes for them.