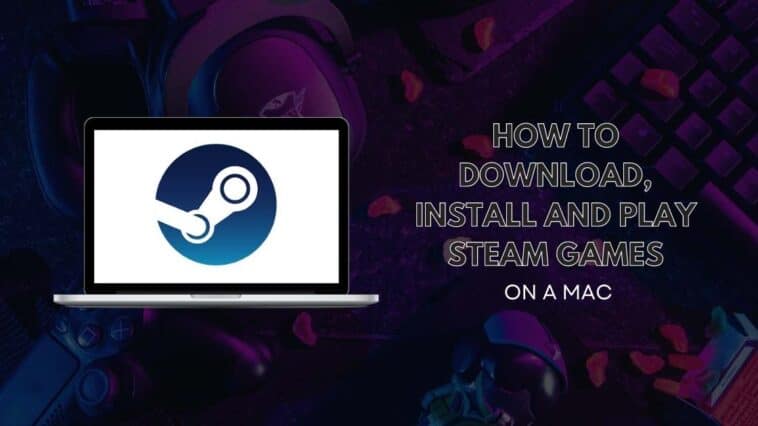 If you’re wondering how to play games on a Mac then the best way is to download and use Steam.

I’ve been a member of Steam for over 10 years and have always found their service to be simply amazing.

They offer a wide range of premium games and DLC content which can be downloaded to a Mac and all that’s required is a functional Steam account, the Steam application installed on the Mac and a valid credit card/debit card to purchase new games or extension packs.

If this is your first time using Steam on a Mac, read on as I take you through “How to Download Install and Play Steam Games on a Mac”.

How to Download, Install and Play Steam Games on a Mac

How to Download and Install Steam on a Mac

Installing Steam on a Mac is quite easy and all it takes is the right Mac operating system.

To get Steam to work on a Mac, the system needs to have at least 1GB of drive space and should run on macOS 10.7 (Lion) or later.

Older versions of macOS won’t support the Steam app and will throw compatibility warnings if you try installing the app.

How to Setup an Account on the Steam App?

When the Steam application has been installed on the Mac, in order to play games or download any onto your computer, you will need to create a Steam account.

You can choose to create an account via the Steam website or you can do so when the Steam app launches on your Mac.

How to Find Games for a Mac using Steam?

So the Steam app is pretty easy to use and all the important categories are listed at the top of the main  page.

To find games on Steam you will have to click on the Store option and then choose any game from the list that appears on the page. You will be able to view every Steam compatible game ever made and that will include Windows, Mac as well as SteamOS.

In order to make it easier to choose a specific game from the list, navigate to the right half of the page and then filter the games based on the OS by clicking the “Mac OS X” checkbox.

If you’re looking for a particular title, you can enter the name of the game in the search bar and click on the Search button to try and locate the game in the Steam app.

How to Install Games using Steam on a Mac?

Since the Steam app is essentially an app store that hosts games to download, all you’d have to do is select the game you want, download the game and then install it on your Mac.

However, there are three types of games available on Steam; Free to Play, Premium and Demos.

If a game is free to play then clicking on the Download and Install button will create a local copy of the game on your Mac which can be played at any time by double clicking on the game icon from the Library/Finder.

A paid game on the other hand requires that you first buy the game and only when the purchase is successful will you be able to download the game locally onto your Mac.

A demo lets you download the game for free and after the demo period is over (mostly 30 days), you will then be made to purchase the full version of the game if you wish to continue playing.

One thing to remember while using the Steam app to purchase a game is that you will be asked if the purchase is for you or if you’re planning on gifting the game to someone else.

Only if the game is for you can you download it on your Mac. If the game is for someone else then only that person will be able to download and play the game by signing into the Steam app using their registered credentials.

How to Play Steam Games on a Mac?

Steam doesn’t run games and will instead launch the game as a standalone app on the Mac.

This is mainly due to the fact that all the games listed on Steam are made by different developers and no two games will have the same layout or control options.

So to make things easier for players and game developers, Steam has forfeited the ability to play the game and the Steam engine will only be used to keep players connected to the online gaming world.

Games will launch similar to how a regular game would on a Mac and icons are created and stored every time a game is downloaded, so if you do not have the Steam app up and running, simply open Finder and double-click on the game you want to play.

Since all games have different controls and shortcut keys, you will have to refer to the in-game settings to find out what the controls are of that game.

The only function that would remain standard is the switcher shortcut key (Cmd + Tab) to switch between games and apps.

Another point to note is that since the games run using Steam’s engine, every time a game is launched, the Steam app will also run in the background and you will be made to sign into your Steam account to play the game or access saved files.

Pros and Cons of using the Steam App on a Mac

However, there are quite a few fixes that you can try if your Steam app does decide to die on you.

Steam is one sure shot way you can access top gaming titles on your Mac and the best part is the Steam app is free to download and a majority of the game titles on the app can be purchased at discounted prices.

While not every single game might be compatible with macOS, a significant portion of the games on Steam do and there are hundreds of games available such as Hitman, Counter Strike, Call of duty series, God of war, FIFA, Skyrim and loads more.