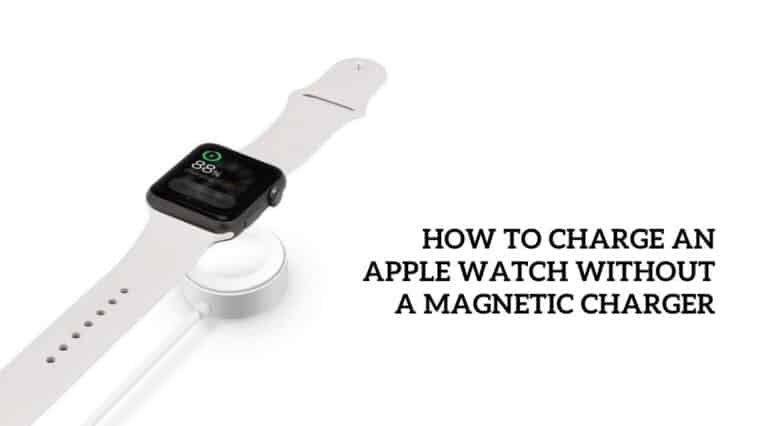 One of the most popular Apple gadgets in the market right now is the Apple Watch.

It’s sleek, customizable and is one heck of a brilliant health monitor and has an impressive processor. Not to forget, it has a fantastic battery life that makes it one of the most premium devices of its kind.

But what to do if your Apple Watch runs out of charge and you don’t have your charger with you?

Or say you’ve lost your charger, will the Apple Watch still charge without its dedicated charger?

How to Charge an Apple Watch Without a Magnetic Charger

Can you Charge an Apple Watch without a Magnetic Charger?

Yes, but only on Apple watches up till Series 6. The new Series 7 and Series 8 depend solely on their Magnetic Charger and can not be charged through other means.

Older Apple Watches on the other hand can be charged if you don’t have the magnetic Charger on hand by using the hidden port underneath the strap of the watch. This slot is located just beneath the lower band and can be accessed by removing the band from the watch.

However, this port was removed from the Apple Watch design post the Series 6 as Apple did not want their customers or third-party companies tampering with their devices.

The thing about this port is that Apple had included it on the Apple Watch for their service team to run diagnostics tests on the Watch and it wasn’t created to sustain charging.

Since it can potentially cause an electrical hazard or might overheat if the wrong voltage is run through it, they decided to remove it altogether for the safety of their customers.

Back in 2015, a brand called Reserve Strap released a strap that was compatible with the earlier Watch Series and came with a built-in battery pack that helped increase the overall life of the Apple Watch by up to 30 hours by using the hidden 6-pin port under the strap.

How to Charge the Apple Watch using the Hidden 6-Pin Port?

Apple Watch Series ranging from 1 through to 6 have a hidden 6-pin port located underneath the bottom strap of the watch.

This port is a diagnostic port that Apple uses to run software and hardware checks on the Watch, but it can also serve as a charging port if you have the right charger available.

You will not be able to charge the Watch through the 6-pin port by using a regular magnetic charger and it will only work if you have a flat-bed magnetic 6-pin smartwatch charger and a USB cable.

Even though it’s possible, I wouldn’t recommend using this method simply because it’s unsafe and can cause the Watch to short circuit or overheat.

What to Do If You Lose Your Apple Watch Magnetic Charger?

If you have an older Watch, there are alternate ways to charge it such as the 6-pin port under the strap, but later models like the Series 7 and Series 8 do not have this diagnostics port and can only be charged with a magnetic charger.

Since the magnetic charger costs approx $30 to replace, there are other options available that don’t cost as much and are actually quite convenient to use such as a third-party MagSafe charger or a magnetic dock for your Macbook.

What to Do If You Lose Your Apple Watch Magnetic Charger Adapter?

If you’ve lost your Magnetic charger adapter then you can either use a third-party wall adapter that meets Apple’s MSI norms or use an iPhone / Mac charging adapter you have lying around.

You can also connect the magnetic dock to your Mac, laptop, power bank or TV to charge the Apple Watch.

The other option is to buy a MagSafe Duo charger so that you can charge both your iPhone as well as your Apple Watch without the need for cables and while on the go.

Unfortunately, this is an expensive option, but there are some third-party companies that have developed portable Magnetic chargers that are MFI compliant and will not damage your Apple Watch.

Brands like Xiwxi, Newdery, Daiendi, and Belay cords are some of the most popular sellers on Amazon that cater to Apple Watch accessories like chargers and charging cables. All their magnetic chargers designed for the Apple Watch cost not more than $10 and are MSI compliant.

How to Conserve Battery on an Apple Watch with no Charger?

Apple has thought of the scenario where users might face the need to conserve battery and have built a feature directly into the Apple Watch that does just that.

This mode is called Low Power Mode and it saves your battery just long enough till you can charge the Watch.

Features such as Always-On Display, Heart rate notifications, SpO2 readings, notifications, emergency alerts and even Cellular networks will be disabled in order to conserve the battery.

If you wish to learn how to enable Low Power Mode to save battery life until you get a new charger, follow these steps.

From now on, if the battery of your Watch drops to 10%, you will receive a notification asking you to enter Low Power Mode.

Enabling it at this time will help conserve the last 10% of battery and give you just enough power to last till you can charge the Watch.

To disable Low Power Mode you can either charge the Watch and wait till the battery reaches 80% or you can swipe up on the screen and go to the Control Center.

From here tap on the Battery percentage and then disable Low Power Mode.

Can I use my iPhone charger to charge my Apple Watch?

Can I use a powerbank to charge my Apple Watch?

How to charge an Apple Watch 6 without a magnetic charger?

Why is my Apple Watch battery draining so fast?

If your Apple Watch’s battery is draining at a faster rate than normal it could be either that you’re using a bad charger or that the battery capacity of the Apple Watch has been significantly reduced and won’t be able to support the device. To check the health of your battery, open the Settings app on your Apple Watch and then tap on Battery followed by Battery Health.

If you have an older Apple Watch then you’re one of the lucky ones who can charge the Watch using the hidden port underneath the strap. However,  if you’re one who owns a newer model then you’re left with no other option but to buy a replacement magnetic charger to charge the watch.

There are other accessories you can use that will charge the watch, like a wireless charging dock or a USB  powered magnetic dock that you can connect to the laptop. With many options available, it’s easy to charge the Apple Watch without a Magnetic charger.