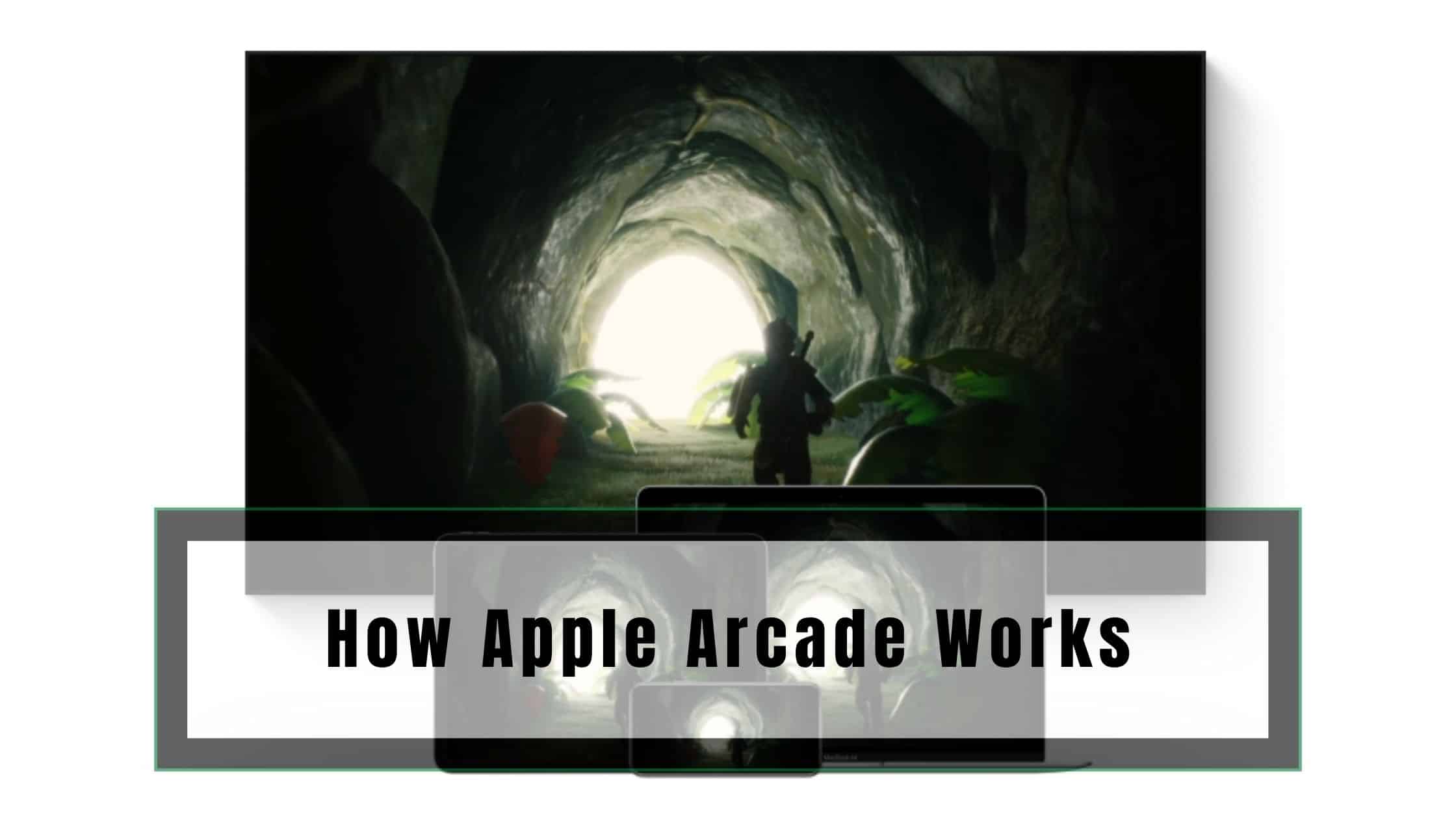 Thinking of playing games on your Apple Device? Check out our entire guide on How Apple Arcade Works!

I’ve always loved playing games on my iPhone. Not just because I’m bored but mostly because I love playing on an Apple Phone as there’s almost no latency or lag while playing even high-end games.

Last year, When Apple launched its much-awaited gaming subscription the Apple Arcade, I immediately jumped at the chance. Check out our guide on How Apple Arcade Works for more details.

Apple Arcade is a premium gaming subscription for iOS and Apple devices that hosts some of the best arcade games in the market right now. This subscription is a godsend as there are always newer games to be played since Apple refreshes its game library rather frequently.

In this article, I’ll take you through How Apple Arcade Works and why it is a good idea to opt for their monthly subscription.

Related: How does Apple Trade-in Work?

After using Apple Arcade for more than a year on various Apple devices, I found out that:

Apple Arcade is a premium online gaming platform developed by Apple for its range of devices. Apple Arcade was created to give users access to a wide range of online and offline games that can be played either on the Apple TV or on one of the Apple devices such as the iPad, iPhone, and so on.

What is Apple Arcade?

Since its launch in 2019, Apple has gradually been making improvements to Apple Arcade in terms of features and compatibility. A simple platform built into the App Store, Arcade lets you choose from over 100 games to play with more games being added every few weeks.

To use Apple Arcade, you need to sign up for the service. This does involve paying a monthly fee of $4.99 or a yearly price of $49.99. Fortunately, this is the only payment that is involved. Once, this is completed you have access to all the games and features of the service.

Most importantly, there are no annoying ads or in-game purchases. Which is honestly, brilliant in this day and age. To sign up, simply follow these steps.

For iPhone and iPad

First of all, you will need iOS 13 or later. So, update your iPhone or iPad. And if you have an older version, then you are better off heading down to Apple Trade and getting the latest device immediately as all future Apple services will require you have a device that is an iOS 13 or later.

For Macs with macOS Catalina and later

How To Use Apple Arcade – Features

Apple Arcade is known to be your one-stop destination for over a hundred games that can be easily accessed from your handheld device. There are a few notable features that make Apple Arcade unlike any other. Check out our guide on How Apple Arcade Works for more details.

What Games are available on Apple Arcade?

Apple has been known to tie in some of the best game developers and production companies to provide unlimited fun and entertainment for users of all ages. When Apple launched the Apple Arcade, it started with no more than 50 games.

However, they’ve since added over 100 new games, making it one of the best platforms in the market. Check out our guide on How Apple Arcade Works for more details.

Not only have they worked with big brands but they’ve also collaborated with indie developers like Bossa Studios, Konami, LEGO, Cartoon Network, Giant Squid, Klei Entertainment, Finji, Mistwalker Corporation, and SEGA to come up with exclusive games only for the Apple Arcade platform.

One of the most amazing things about this platform is that all the games are just on the platform. Meaning there are no iOS games that you would usually find in the Apple store.

Some of the top games available on Apple Arcade are:

Sega has once again delivered an amazing multiplayer racing game that features Sonic and Friends. In the game, you are given a choice to pick from 15 characters to play and compete with.

Available for the iPhone, iPad, and Apple TV, Lego Brawls is a fun-packed team action brawler where you get to decide your fate. The game brings out your inner creativity by letting you design your minifig with superhero-like abilities.

A futuristic tale about the descendant of the great Lancelot, Fallen Knight revolves around the journey of Lancelot the 49th as he faces 6 enemy heroes who have had a dark past. The game is designed to reward those who are victorious and punish those who make mistakes.

Tapping on Apple Arcade will take you to the Sign-Up page where you can opt for a 30-day free trial, post which the subscription charges are $4.99 for a month and $49.99 for a year.

There are only two requirements for Apple Arcade to work:

As soon as the signup procedure is completed, you can proceed to select the games you wish to play. You can download the desired game by

If you are planning on running it on an Apple TV, you simply need to access the separate tab for Apple Arcade on your Home screen. You need to follow the above steps to activate it. We do recommend you use it for free with the $4.99 a month plan, just to test the waters.

How can I cancel Apple Arcade?

To cancel your Apple Arcade subscription on iPhone or iPad, follow these steps,

Step 1 Open the App Store on your device.

Step 2 Tap on the profile icon, and enter your Apple ID if requested.

To cancel your Apple Arcade subscription on Mac, follow these steps,

Step 1 Open the App Store on your Mac.

To cancel your Apple Arcade subscription on Apple TV, follow these steps,

Step 2 Select Users and Accounts and then choose your account.

How good are the Apple Arcade Games?

Let me be completely honest. Apple Arcade is filled with indie games that are meant for the casual gamer. So, if you are planning on playing something with your children or if you simply want to kill time, then this might be the perfect gaming platform.

You won’t see any ads or even find any sort of microtransactions within the games. So, the gaming experience itself is pretty wonderful. Of course, the animation and story might be a bit juvenile.

Now for the cons, this is not the platform for serious gamers. If you’re expecting games with high-quality storylines and features, then your way of base. This platform doesn’t even have a singular AAA title. You won’t be able to stream either as these games are offline.

Does Apple Arcade have Parental Controls?

Although it doesn’t seem like it, Apple Arcade has an extensive range of games. And not all happen to be appropriate for all ages. So, if parents or guardians don’t want their kids accessing games with gratuitous violence. Then it would be best to set restrictions so that the kids can access only age-appropriate games and content.

It is important to note that Apple Arcade itself does not have Parental control. However, Apple Arcade is automatically added to Apple’s inbuilt screen time setting which is where you can set Parental restrictions. But you should ensure that the child’s device is part of family Sharing.

How to cancel an Apple Arcade subscription

Those of you who have decided to cancel your subscription for any reason whatsoever can do so in two methods; the easiest way via your mobile device or your Mac

Apple Arcade has been the talk of the last two years mainly because of its cross-device compatibility and low subscription fee. As you have seen, Apple Arcade is ideal for all age groups and has a wide variety of games available in the App Store for every kind of player.

The article How Apple Arcade works take you through what Apple Arcade is all about along with its important features, signup options, subscription plans, and more.

If there is anything you feel that has been left out or any questions you may have pertaining to this article, please feel free to drop your question/comments below.

How do you use Apple Arcade?

The easiest way to access Apple Arcade is to open the app store and go to the arcade tab. This arcade tab is usually at the bottom of the screen on iPhones and iPads. On Apple TVs, you can find it on the top of the screen, and on Macs, it can be found on the sidebar. Check out our guide on How Apple Arcade Works for more details.

Can the games be played offline?

Yes, you can download offline titles on Apple Arcade and play them on your device without an internet connection. Not all games support this, but you can check for Offline games on the App Store and download them.

How often are games added to Apple Arcade?

New games are added to Apple Arcade every week. These are exclusive titles created for Apple Arcade. These games are also designed to run well on supported devices without any lag or glitches.

What countries is Apple Arcade available in?

Apple Arcade is available in 150+ countries. Almost all countries with an App Store will be eligible for Apple Arcade and its titles.