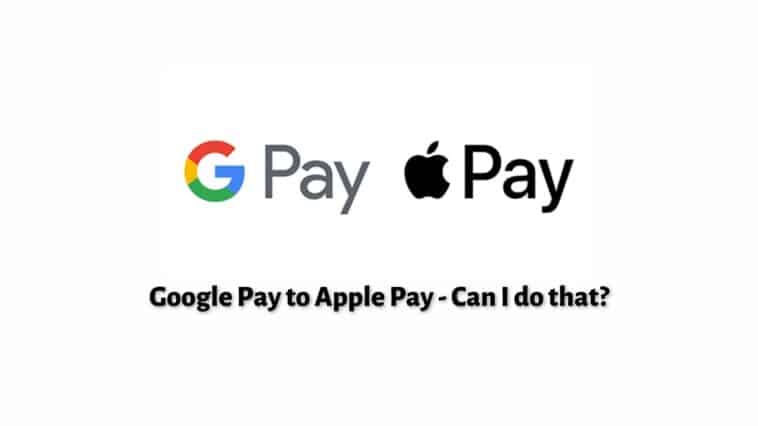 Google Pay and Apple Pay are two of the most popular Online Payment Systems and there is a good chance that if you are on iOS, you have tried both services. But have you ever wondered about transferring money between the two services?

This article ‘Google Pay to Apple Pay – Can I do that?’ is a guide on how to do it.

iPhone users have the privilege of having the option to use both Google Pay and Apple Pay, but sometimes for a certain transaction, one might be better than the other because of offers and vendor support. And in such cases, you may want your money to be on the service that provides you with the best offers.

So, if you want to know if you can transfer money between Google Pay and Apple Pay, then you are at the right place. This guide will cover ‘Google Pay to Apple Pay – Can I do that?’ and more related to the two payment systems. Read on to know more.

Google Pay to Apple Pay – Can I do that?

What is Google Pay?

Google Pay is a popular Online Payment System that lets users transfer money to vendors, banks, and other users in Google Pay. It has hundreds of millions of users across both iOS and Android.

Google Pay has features like Contactless Payment, NFC (Near Field Communication), and more. Google Pay uses PINs for the authentication of transactions. It is also safe and secure to use.

Apple Pay or the Wallet app on your iPhone is also an Online Payment System developed by Apple. It works similar to Google Pay as you can make payments to sup[ported banks, vendors, and users within the system. But unlike Google Pay, Apple Pay is only available for iOS users.

Apple Pay also features Contactless Payment, NFC, and more. And when it comes to payment authentication, Apple Pay allows biometrics like Touch ID and Face ID along with PINs. It has privacy and security features to keep your money safe.

Google Pay to Apple Pay – Can I do that?

Google Pay and Apple Pay are some of the most popular Online Payment Systems, They have a clean interface making them easy to use. Both are also independent closed payment systems, meaning you can only send money within the system itself or to supported vendors.

How to Transfer Money between Google Pay and Apple Pay (Indirectly)

While this process is not direct, it will only take a few seconds to a few minutes at most to get it done (unless there is some issue). Follow the steps below to transfer money from Google Pay to Apple Pay.

Step 1 First, open the Google Pay app on your smartphone.

Step 2 Now tap on the Payment section in the app, the section will be located at the bottom of your screen.

Step 3 In here, go to the Google Pay Balance section and then tap on ‘Cash Out’.

Step 4 Enter the amount that you want to transfer to your bank account.

Step 5 Confirm your Payment method, and it’s your bank account in this case.

Step 6 Now tap on ‘Transfer’ to start the transaction.

The transaction should normally be done in an instant unless there is a server problem or any other issue. If the transaction is not completed in 5 days, you will get a refund.

Similarly, you can use the Google Pay website to transfer money if you are on a Mac or PC. To do this, follow the below steps,

Step 2 Here, navigate to Settings and then find the Payment Methods section.

Step 3 In the Payments Method section, look for the ‘Transfer Balance’ text and click on it, you can find it under your Google Pay Balance.

Step 4 Now enter the amount that you want to transfer to your bank account.

As mentioned above the transaction should be done in an instant unless there is a server problem or any other issue. If the transaction is not completed in 5 days, you will receive a refund.

Apple Pay to Google Pay – Can I do that?

How to Transfer Money from Apple Pay to a Bank Account?

Step 1 First, open the Wallet app on your iPhone.

Step 2 Now, go to the Apple Cash Card section and then tap on the ellipsis (3-horizontal dots) menu.

Step 3 Tap the ‘Transfer to Bank’ option and enter the amount of money you want to send to your bank account.

Step 4 Tap the next option and then choose the 1-3 Business Days option.

Step 5 The app will ask you to confirm your identity, you can confirm by using your biometrics or Passcode.

How much money can you send on Google Pay?

Google Pay has some limitations when it comes to the amount of money you can transfer per day or keep in the account. This also depends on the account status of the user.

For any user, Google Pay allows the user to have up to $25,000 in their account. Verified users can transfer up to $5,000 per week, while unverified users are limited to $500 per week.

How much money can you send on Apple Pay?

Just like Google Pay, Apple Pay also has limits when it comes to transaction amounts and maximum balance allowance.

For Apple Pay, the maximum balance limit for any user is $20,000, and you cant exceed this limit. The weekly transfer limit for Apple Pay is $10,000, once you hit this limit, you won’t be able to send or receive any money.

See also  How to find Applications Folder on Mac in 2022

Unlike Google Pay, these limits apply for all users on Apple Pay, there is no difference between verified or unverified users.

Can I use Google Pay to Withdraw Money at an ATM?

Google Pay to Apple Pay – Can I do that? – Takeaway

The above guide explains how to do transfer money from Google Pay to Apple and vice versa. You can also find answers to some frequently asked questions related to Google Pay and Apple Pay. This guide can aslo be applied to other Online Payment Systems like PayPal, Venmo, and more. Hope it helped.

Which Countries And Regions Have Apple Pay?

Apple Pay is a popular online payment system, but it’s only available in selected regions and countries. You can check out below where you can use Apple Pay.

Which Fast Food Restaurants Accepts Apple Pay In The USA?

Apple Pay is extremely popular in the USA, and tons of fast-food restaurants support it. Some of the popular ones are McDonald’s, Starbucks, KFC, Panera Bread, Dunkin’, Taco Bell, and more.

If you received an email stating your payment has been declined, it means that the bank was unable to process it using Apple Pay. This could be due to insufficient funds in your bank account to pay. You will have to add money and try again.

What to do if you see an unexpected charge on Apple Pay?

If you see an unexpected charge on your Apple Pay, you can request a refund but you must have paid for the purchase first. You can also cancel a subscription if you were charged for it without your notice or if you don’t want to continue it.

Why has my Apple Pay Declined?

How to use Apple Cash on Amazon?