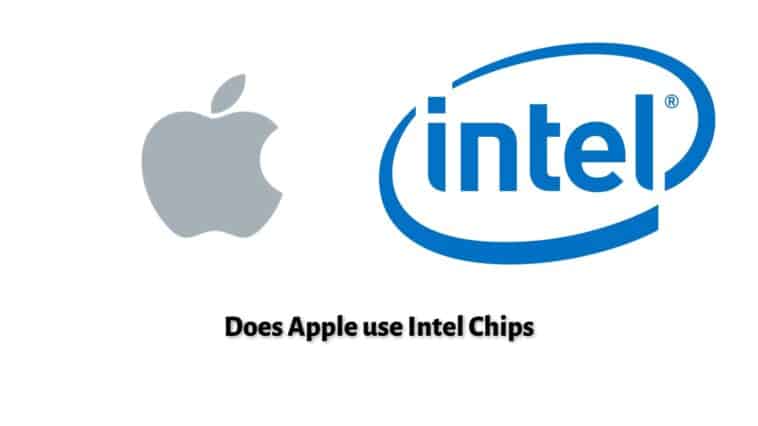 Wondering whether you can still buy intel powered Macs or if Apple still produces Intel-based Macs? This article on does Apple use Intel Chips will explain all the questions you have regarding the subject.

Apple and Intel have been at the forefront of premium computing devices for years now and since it is coming to an end soon, many questions need to be answered. Does Apple use Intel chips, which Apple products have intel chips, what is the future of Macs, and more.

This article on does Apple use Intel chips will answer the above questions and more.

Read on to know more and what you should do when coming to choosing a new Mac for yourself or a loved one.

Does Apple use Intel Chips

The answer to does Apple use Intel chips is a straightforward yes, but there is more to it than just that. Apple and Intel have been in partnership for over 15 years now, and some of the best Macs have been produced during that time. But this partnership is coming to an end by the end of this year.

Now you may have questions like why is the partnership ending, what happens after and what you should know when it comes to choosing a new computing device like a Mac.

Read on to know more about does Apple uses Intel chips and related topics.

Apple still uses Intel chips in some of its products. And for some of these products, the Intel chips are alternatives while for some Apple doesn’t have an Apple Silicon counterpart yet.

Here’s the list of Apple Products with Intel chips,

The good old 27-inch iMac has been a part of many households. This outdated design, especially when put against the new colorful 24-inch iMac with M1. You can choose between a 10th Gen Intel Core i5, i7, or i9 processor for these. You can equip these with up to 128 GBs of RAM and up to an 8 TB SSD.

The base model starts at $1799 making it quite a bit more expensive than the 24-inch iMac, but you also get a bigger and better screen with more graphics power inside.

The Mac Mini has also been a popular device for powerful computing that takes as little space as possible on your desk. This tiny machine also features Apple’s M1 chips but Apple offers you the choice to choose from Intel chips if needed.

You can equip the Mac Mini with an 8th Gen Core i5 or i7 processor, up to 64 GBs of RAM, and up to 2TBs of PCIe SSD storage. You also get Intel UHD 630 graphics embedded into the processor.

This is the only device on Apple’s lineup of Macs that doesn’t have an Apple Silicon counterpart yet. The Mac Pro is the most powerful Apple computer yet, you can choose from a range of Xeon processors, with a max of 28 cores.

You can equip the Mac Pro with up to 1.5 TBs DDR4 ECC memory with the 28-core Xeon processor variant along with an 8TB SSD. For graphics, you can choose from AMD Radeon Pro graphics with up to 64 GBs of GDDR6 (on one card).

When fully specced, the Mac Pro has some serious power under the hood. It is developed for professionals that can take advantage of the specs. It is costly but it is one of a kind and it looks stunning as well.

Should you buy Apple products with Intel Chips

Now that you know which Apple products use Intel chips, should you buy any of them? I have hinted before that M1 Macs might be the better buy but it doesn’t mean Intel-powered Macs are bad or serve no purpose. There is a reason why Apple still sells Intel-powered Macs.

The main reason is compatibility with software. Since M1 Macs don’t support some software natively, it can only run them through Rosetta, which can affect performance negatively. So in such cases, Intel-based Macs will be the better choice, especially for professionals.

If you ask for my opinion, I would choose M1-powered Macs over Intel-powered Macs because they offer much more value. Apple has also promised native support for all apps meaning in the future you will experience apps running at full speed on Apple Silicon.

I would choose the 24-inch M1 iMac over the 27-inch Intel iMac for home use, because of the better design and single-core performance. If you are someone who needs multi-core and graphics performance over design, then choose the Intel iMac. Also, you will get a bigger screen.

If you are torn between which Mac Mini you should choose, then it’s simple, just get the M1 powered Mac Mini because there’s hardly any advantage for Intel Mac Minis. Intel Mac Minis also cost quite a bit more making it a poor choice unless App compatibility is necessary for you.

And finally, people purchasing Mac Pros will know exactly what they need, so get it if you can take advantage of all that power.

Check out: How Apple warranty works

There are multiple reasons why Apple stopped using Intel chips. These include better integration, innovation, and profits. Apple is not new to the chip-making business, they have been making mobile processors for their iPhones and iPads. These are some of the fastest chips in the smartphone and tablet market.

Apple’s ARM-based processors on iPhones and iPads are not just fast but also incredibly efficient and part of this efficiency is thanks to tight integration between software and hardware. So when Apple realized that it can make faster chips with better efficiency than Intel, it had to try it. It may have been a huge risk, but for Apple, it has paid off.

Advantages and Disadvantages of not using Intel Chips

Apple Silicon is based on ARM and these are undoubtedly the future of computing. Apple’s first computer chip the M1 has been nothing short of remarkable, it’s fast, efficient, and cheap to implement for Apple.

With Intel struggling when it comes to creating chips with good energy efficiency, Apple just took the world by storm by releasing some of the most power-efficient chips ever. The advantages for M1 include software integration, efficiency, high single-core performance, good graphics performance, and low cost.

Compared to Intel Macs, their M1 counterparts are much cheaper.

A disadvantage when it comes to Apple Silicon is the lack of support for some apps to run natively, but Apple is working with developers to make sure there is no disadvantage as such.

As for security wise, nothing to worry about- according to Mac Security, since these are hardwares as opposed to software security which the latter is more vulnerable.

Other disadvantages include lack of user upgradability because the processor, ram, and storage are unified. While this is beneficial for performance, it is not good for upgrading down the line, so users have to configure their devices for the future when buying.

And finally, since Apple is responsible for all the components of its Macs, they can charge whatever they want which is good in its way but if Apple wants to put itself first then they could screw customers over.

Read on: How to fix Macbook Screen flickering

What is the Future for Macs and Intel

While there are Macs with Intel chips sold by Apple, Apple plans to shift their entire product catalog to Apple Silicon Macs only by the end of 2022.

The 15-year partnership between Intel and Apple is coming to an end but the future is bright.

With the past few years being poor for Intel, getting beaten comprehensively by both AMD and Apple, they are starting to turn a new leaf over with their 12th Gen processors. With AMD, Apple and Intel all trying to get a share in the processors market, we can be sure that they will push each other to the limits of performance and efficiency.

This is great news for customers like us, as the more the competition the better it is for us. This year with Intel’s 12th Gen processors, Apple’s M2 chips, and AMD’s Ryzen 6000 series APUs, it sure looks like a great year to invest in a new computing device.

Check out: Best CD and DVD Drives for Mac

The shift to Apple Silicon on Macs is a move from Apple that is aimed to bring customers better performance, more efficient and affordable devices. While many expected the transition to be rough, it has been the opposite.

The new Macs are just what Apple promised to be, powerful, efficient, and affordable when compared to intel powered macs. The integration between hardware and software along with 5nm processor nodes make this a reality.

Does Apple use Intel chips? Yes, but only for a while. After that, Apple might not go back to Intel, but Intel still has the PC space where it is a major player. The future looks bright for us thanks to increased competition, let’s hope for competitive products too.