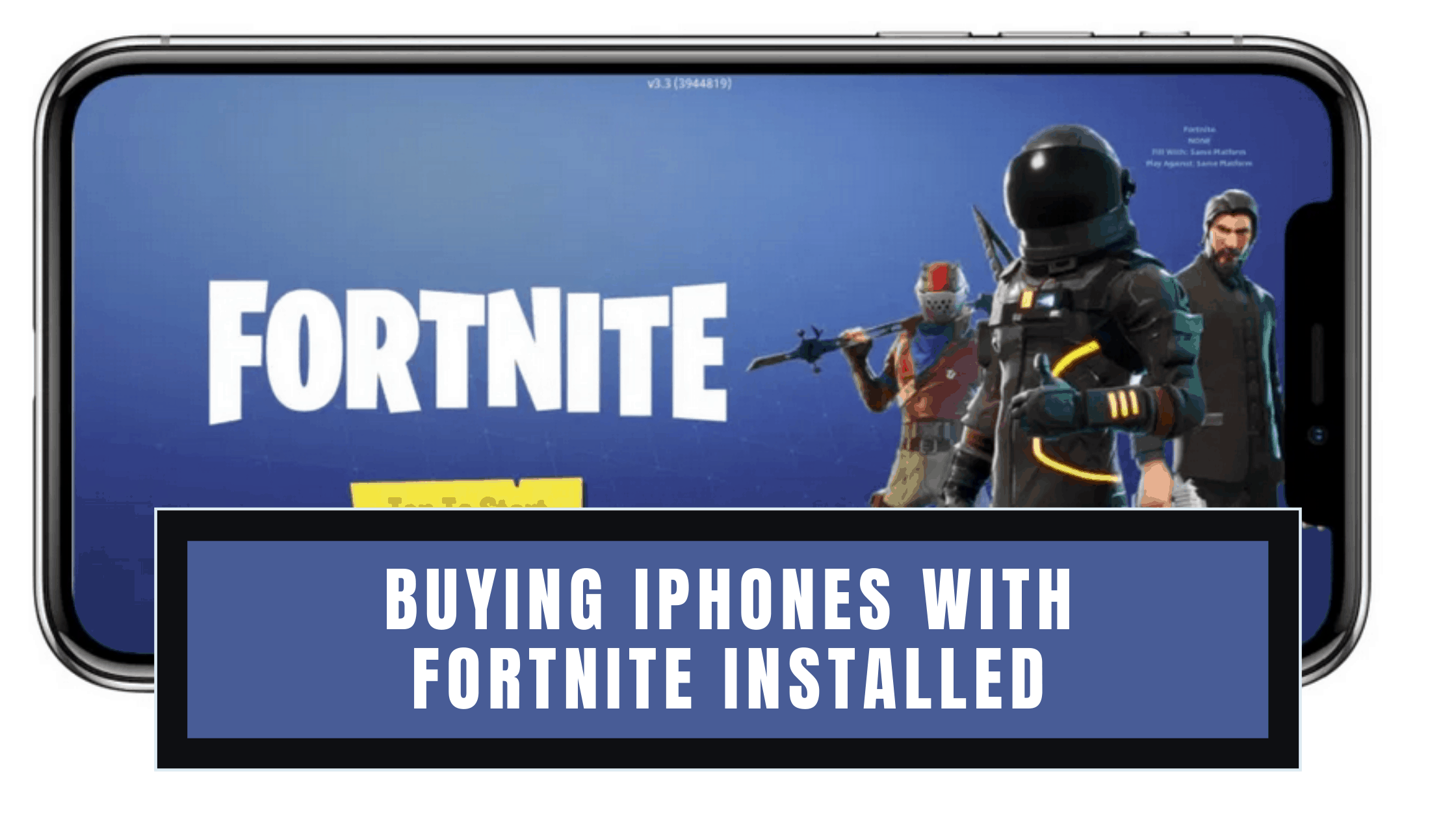 I have always been a fan of gaming on iPhones as they offer superior clarity, less to almost no lag in the gameplay, are sleek to hold, and are convenient to use regardless of where you are or what you’re doing. I’ve been a fan of Fortnite ever since it was launched for iOS and boy let me tell you, it has been a ride.

Check out our guide on Buying iPhones with Fortnite Installed.

Now as most of you may have heard, Apple and the developers of Fortnite, Epic Games had a falling out a couple of weeks ago and this was due to the fact that Epic Games allegedly went against Apple’s App Store policy. This has led to a complete ban of the game on the App Store which means that no one can download or install Fortnite on their new iPhones.

Taking advantage of this fact many iPhone owners who had Fortnite pre-installed have put up their iPhones for sale quoting mind-boggling rates. Most importantly, it’s not even the latest iPhone.

Let’s take a look at what’s driving people crazy and if it’s a good idea to invest in an expensive pre-owned iPhone just for the sake of a game. Here’s our guide on Buying iPhones with Fortnite Installed.

After having played Fortnite on various iPhones and testing the limits of the game. I found out that:

The Best iPhone to Buy which comes pre-equipped with Fortnite is the iPhone 11 Pro. Not only does it have a larger and more sensitive touch screen but the latency period between the touch and the action is far lower than the previous generation iPhones.

Buying an iPhone with Fortnite installed should not be on the top of your list of priorities. Simply because it is outrageous to pay a couple of hundreds of thousand dollars just for the sake of a game. People have taken advantage of this situation and have listed various used iPhones on the market at extremely high prices only because Fortnite is installed in their iPhones before the ban.

A reasonably priced iPhone X sold at $648.95 is being sold with Fortnite installed. Yes, this is a used 3GB 64GB Space Gray iPhone X with a brand new display and the seller has stated he would be including an extra camera as the current Face ID camera is not functional.

Specs of the iPhone X

A premium iPhone with dual cameras and a larger battery, the iPhone 8 Plus with Fortnite installed are being sold at $1,389 on eBay.

Specs of the iPhone 8 Plus

A slightly expensive iPhone 11 with Fortnite installed is available on eBay at $1697.00 which is pretty steep considering the current value of a brand new iPhone is $649.

Specs of the iPhone 11

This iPhone 11 Pro Max is available on eBay at $3500 simply because it’s being sold with Fortnite installed. The seller has not updated much on the overall condition of the iPhone but was kind enough to let us know that it’s in perfect condition and includes a screen protector and protective case.

Specs of the iPhone 11 Pro Max

This is a used iPhone XS Max which is sold with Fortnite installed and is available on eBay at $4000. This variant is currently network unlocked and can be used with any network carrier of your choice.

Specs of the iPhone XS Max

This iPhone XR that is sold with Fortnite installed is being retailed at an extremely ludicrous amount, $10,000 for an iPhone that’s currently available for $549 directly through Apple itself.

See also  Apple iPhone Mini vs iPhone SE 2022 | What should you go for?

Specs of the iPhone XR

Why You Shouldn’t buy an iPhone with Fortnite Installed

Other than the insane price, there are a few other important reasons as to why buying an iPhone with Fortnite installed is not worth it:

However, despite the ongoing feud between Apple and Epic Games, you can still play Fortnite on an iPhone or any Apple device. All you need is access to Nvidia’s cloud gaming service GeForceNow and you can play Fortnite on any platform for free. Well, except for the game-related purchases. So, this is really the primary reason for you not to buy an iPhone with Fortnite Installed.

In fact, buying an older generation iPhone for thousands of dollars for a pre-installed game is absolutely moronic when you can play it on your already pre-existing iPhone. You can even get the latest iPhone and still play Fortnite.

Most importantly, the graphics are stellar as well. Since you’re playing through Nvidia’s cloud gaming service, you can expect a certain level of credibility and quality. And with Nvidia being known for their amazing graphics, you can expect much better quality than running it natively on your hardware. So, really there are only pros to using this method.

There are, however, certain pre-requisites to play Fortnite on GeForceNow. First and foremost, you need to have high-speed internet. It also needs to be seamless and reliable. This is because Fortnite which’s run through the cloud gaming service is heavily dependent on the internet (It’s a streamed game). Even more so than if you play it natively depending on your hardware.

How much does an iPhone with Fortnite installed cost?

iPhones with Fortnite listings range in the hundred across various sites like eBay. Unfortunately, when it comes to the prices, it’s extremely random.

It generally ranges from around $800 to $10,000. You can even find crazy $20,000 listings as well. However, these outrageous prices are just that, there’s no thought or pattern behind them.

You won’t find any iPhone 12’s with Fortnite as Apple banned Fornite before iPhone 12 and its variants hit the market.

If you’re seriously considering buying an iPhone with Fornite then you are better off with the iPhone 11 as it’s relatively the latest one.

iPhones with Fortnite listings range in the hundred across various sites like eBay. Unfortunately, when it comes to the prices, it’s extremely random. It generally ranges from around $800 to $10,000. You can even find crazy $20,000 listings as well. However, these outrageous prices are just that, there’s no thought or pattern behind them.

See also  The 6 Best Waterproof Bags for iPhone in 2022

You won’t find any iPhone 12’s with Fortnite as Apple banned Fornite before iPhone 12 and its variants hit the market.

If you’re seriously considering buying an iPhone with Fornite then you are better off with the iPhone 11 as it’s relatively the latest one.

How to Play Fortnite on iPhone

Unbeknownst to most, you can actually play Fortnite on your iPhone without having to crack the device or shell out a lot on one that has the game pre-installed.

There are two ways you can do this, one is by using the Xbox Cloud Gaming tool and the other is by using GeForceNow on your safari browser. Read on as I take you through how to play Fortnite on your iPhone in the safest ways possible.

Both of these methods work on certain iPhone models and are supported by iOS 14 and above only. So ensure your device meets these specification requirements before proceeding.

How to Play Fortnite on iPhone with Xbox Cloud Gaming?

To play Fortnite on your iPhone with your Xbox account;

How to Play Fortnite on iPhone with GeForceNow

To play Fortnite on iPhone with GeForceNow, all you have to do is open Safari and head to GeForceNow’s official website. Now, sign up for a free account.

With the ban on Fortnite and the Epic Games dev account, we’re hoping to see some resolution to this conflict soon. As Fortnite is the most popular MMOG available right now it’s no wonder there are so many avid fans who would do anything to play the game on an iPhone.

It’s always best to consider the fact of moving onto an alternate mode to play the game. With the prices quoted for the various iPhones with Fortnite installed, it’s always a good idea to be open to other MMO games or a different platform to play Fortnite on.

The article Buying iPhones with Fortnite installed covers the available used iPhone models that come with the game installed before the ban. You can choose from the list above but there won’t be any guarantee on the quality of the product or the authenticity of what’s being sold online.

Can iPhones get Fortnite?

Will Fortnite come back to Apple?

No, the way things are moving between Apple and Epic, I don’t think Fortnite will ever return to the App Store. But if you really want to play Fortnite on the go, then you can do by using a streaming service like GeForce Now.

Will Fortnite come back to Mobile?

Fortnite is not likely to return to App Store or Google Play Store anytime soon. This is because of the dispute between Apple and Epic, and Google and Epic. The dispute is over platform fees charged by Apple and Google for maintaining their respective app stores.

Is it worth buying an iPhone that’s pre-installed with Fortnite?

Fortnite is not likely to return to App Store or Google Play Store anytime soon. This is because of the dispute between Apple and Epic, and Google and Epic. The dispute is over platform fees charged by Apple and Google for maintaining their respective app stores.