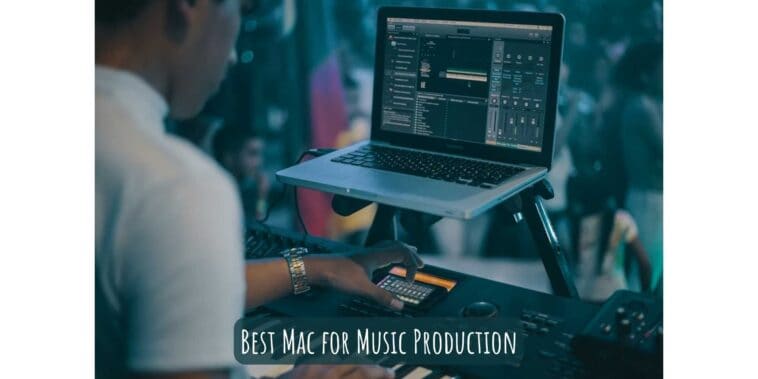 Macs are some of the best computing devices you can buy, be it video rendering, graphic design, or anything professional. They are also excellent for music production.

Student or professional, if you are into music production, then Macs should be on the top of your list of potential devices. And if you have decided to go for Mac, then finding the best Mac for music production can be confusing with so many options.

To make a decision, you have come to the right place, read this article on the best Mac for music production to how to choose the correct Mac for you.

Why Should you Get a Mac for Music Production

macOS also works better and has fewer issues when compared to Windows or Linux. This allows for a streamlined workflow. Macs are great devices from a hardware perspective too. They are performant, sleek, and a complete package. With the new powerful and efficient M1 chips, it only seems to favor Macs’ advantage for music production.

While a MacBook Pro costs much more compared to a MacBook Air, it also offers better performance, more ports, and battery life. Also if you have the cash, go for the 14” and 16” MacBook Pros over the 13” model.

Though the new MacBook Pros with Apple Silicon might not support a few software natively, I would still recommend getting them over the Intel Macs. And when configuring your MacBook, use the tips I provided above.

The Mac Mini might be overlooked by many, but it is easily one of the best Mac for music production. It is small, powerful, quiet, and offers a varied selection of ports that can be vital for some professionals and artists.

The port advantage is huge as music artists would love plugging in devices and other kits that they need. Another advantage of the Mac Mini would be that you can carry it around between your studio and home if you have monitors set up at both places.

Here too, get the M1 Mac Minis over Intel Macs though Inels Macs are closer and sometimes better than M1 Mac Mini because there is no power constraint unlike on a laptop.

The Mac Studio is currently Apple’s most powerful Mac for most applications. It is based on the M1 CPU architecture. You can configure it with the M1 Max or M1 Ultra SoC.

You can also choose up to 64GBs of RAM with M1 Max and up to 128 GB with the M1 Ultra. And for storage, you can configure the devices with up to 8TBs of superfast SSDs.

With Mac Studio, you get 4 Thunderbolt ports, 2 USB-C ports, and 2 USB-A ports regardless of the SoC you choose.  You also get 10GB ethernet, an HDMI and a 2.5mm headphone jack. These are more than enough for connecting all your peripherals and instruments for music production.

The size is also just over 2 Mac Minis stacked over each other, making it small and efficient when it comes to managing desk space. However, I can’t say the same for the price, the Mac Studio starts at 2000 USD and can go up to 8499 USD for a fully kitted model.

The good thing is you don’t need the highest-end model. The M1 Ultra variant is much overkill for music production, but it will if you are into editing videos as well.

If you plan on only doing music production, the M1 Max Mac Studio will be more than enough. And for 2000 USD, you get a lot of power.

So should you get the Mac Studio for music production? Yes, if budget is not an issue. But in my opinion, it would be wiser to get an M1 Max MacBook Pro as it comes with a screen, keyboard, and trackpad. All of which you need to get separately with the Mac Studio.

A laptop is also more versatile but slightly less powerful.

If you are looking for a powerful home or studio workstation, then going for an iMac makes the most sense as you don’t have to worry about space or power.

The new 24” M1 iMac looks beautiful, but won’t be as powerful as a fully specced Intel iMac, but it is a great low-cost Mac for home studios.

27” Intel iMacs are particularly powerful with insane amounts of RAM and storage capabilities along with the ability to run powerful discrete GPUs.

Regardless of which one you choose, iMacs are some of the best Macs for music production. If you have the option to buy only one Mac, then I would suggest you get a MacBook as that is the most versatile option in terms of power and portability.

How to Configure Macs for Music Production

Music production can require a lot of processing power, particularly when using tons of plugins, effects, and external devices. And for quick render times, the faster the processor the better.

For performance, M1 Macs are much better than Intel Macs. Even from an efficiency standpoint, the M1 Macs are outstanding, so they will provide you with excellent battery life and performance.

If you have to buy an Intel-based Mac, then steer clear of i3 models, i5 or i7 should be the minimum. That being said, all Apple Silicon Macs are good for music production, while M1 Pro and M1 Max can do some serious professional music production.

The only problem with Apple Silicon Macs can be a lack of software support, but let’s hope Apple adds native ARM support for all software.

See also  Apple Watch Cellular vs GPS 2022 | What is the Difference?

While graphics are an important component for any computer, they are not so useful when it comes to music production. This is mainly because music production relies more on processors than graphics.

The only reason a music producer would need powerful graphics would be for some specialized software or for hooking up a bunch of external monitors, which even entry-level Macs would handle well.

If you are someone who dabbles with graphic design or video rendering on the side then, it will be good to invest in a Mac with powerful graphics. For this you can go for an iMac or a Mac Pro, they have discrete GPU options.

When you are producing music at a professional level, you will need as much memory as possible for the best experience. This is because music software can be hungry for memory, and a lack of memory could hamper your work by slow performance or even crashes.

More RAM will also allow you to work with many instruments and effects and reduce rendering time significantly. I recommend at least 16 GBs of RAM for a good experience but the more the better.

M1 Macs have been praised for their memory management so you might get away with using just 8 GBs of RAM, but I would still recommend getting 16 GB minimum for future-proofing as you can’t upgrade RAM later on.

The first M1 Macs (Macbook Air and MacBook Pro 13″) allowed for only 16 GBs of RAM. The newer 14″ and 16″ MacBook Pros allow up to 64 GBs of memory, you won’t need so much for music production but if you do video or graphic rendering then go for it if you have the cash.

With some Intel Macs still on sale, you will need more memory when compared to Apple Silicon Macs, but at the same time, Intel Macs can upgrade memory down the line so you can get 16 GB now and increase the capacity later when you can.

So for RAM, go for at least 16 GBs no matter which Mac you are choosing this will offer good performance for now and later down the line. But if you have the cash, get as much as you can, especially with Apple Silicon Macs because they have no option to upgrade later.

Storage is a simple component that can be overlooked by many. If you don’t have fast and enough storage, it can be a headache. While all Macs have speedy storage, the same can’t be said about their capacity, especially since each tier of storage costs a fortune.

MacBooks since 2017 have had no feature for storage upgrade so you are stuck with what you get as the storage is soldered on. So make sure to choose enough storage for your projects. My recommendation would be to choose at least 512 GBs of storage. While the 256 GB base version might be fine for some, it’s recommended to invest more as you can’t increase storage later.

If you are running low on storage you can get an external hard disk or memory card and use a dock to connect them to your Mac. With the new 14″ and 16″ MacBook Pros, you get an SD card reader built-in which is super cool and they have more ports so you can easily connect an external hard disk.

Get at least 512 GBs of storage for music production on Macs. And as always, the more the better when it comes to storage.

For a music producer, inspiration may strike any time and you can be someone who moves around a lot between gigs. For this, you will need to decide whether you want a portable Mac or not.

If you value portability, get a MacBook Air/Pro or a Mac Mini (you will need a monitor). You can carry these devices around in a backpack so you can easily set up a music production workstation.

Portability is not an option if you are interested in an iMac or Mac Pro, these are powerful workstations that you can take advantage of at your studio or home.

Ports are vital for music production especially if you need to attach external kits and devices.

Over the past few years, Apple were aiming for form over function with MacBooks which allowed for incredibly thin and beautiful MacBooks but this came at the sacrifice of ports.

With the new 14″ and 16″ MacBook Pros, and Mac Studios you get tons of ports making them some of the best devices to produce music if you need to use kits and devices.

And if you are not going for a laptop form factor, then Mac Minis and Intel iMacs have always had an excellent selection of ports. So if ports are important for your music production workflow, make sure to choose your Mac wisely.

Now that you know which Mac to choose, here is a small brief on the best Music Software for Macs.

Logic Pro is probably the best place to start at. Developed by Apple, this is a professional audio software that many professionals swear by. If Macs are used by a studio, then they probably also use Logic Pro.

Logic Pro is an excellent audio software with all the features you need however it is not cheap. You can buy it when buying a Mac or you can try the free trial and test if you like it. In any case, it is a must-try for music production enthusiasts.

FL Studio is another popular audio production software. This is known for its easy-to-use interface and extensive plugin support. The app can be downloaded and trialed for free but it costs money afterward. It can be expensive for all the features you can get cheaper base versions as well.