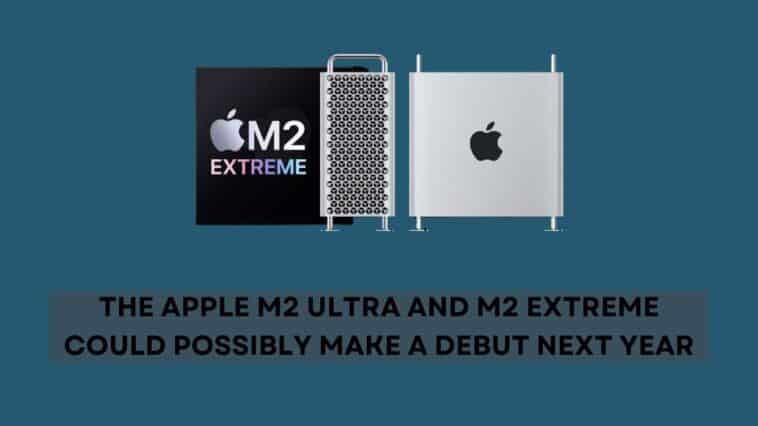 While we still don’t know what Apple is planning to do with their new Silicon Mac Pro, rumors suggest that the expected launch is next year and that the Silicon Mac Pro just might receive a new ARM-based chip.

Based on predictions by editors at Macworld and from an earlier report from Bloomberg, it’s quite possible that the new Silicon Mac Pro and the Mac Studio that’s yet to be released, will come with the M2 Ultra and M2 Extreme chipsets.

According to Reports, The Silicon Mac Pro Might Receive the M2 Ultra or the M2 Extreme

After estimating how Apple has worked their way up with their ARM-based chips since 2020, Karen from Macworld suggests that the M2 chipset might receive 4 more variants over the next year that could include an M2 Ultra and an M2 Extreme.

So, by estimates, the predicted performance of these chipsets that are due for a release will be as follows:

We had also come across an earlier prediction by Bloomberg that there might be a new and redesigned Mac Pro with either a 20-core or 40-core chip.

Codenamed Jade 2C-Die and Jade 4C-Die, a redesigned Mac Pro is planned to come in 20 or 40 computing core variations, made up of 16 high-performance or 32 high-performance cores and four or eight high-efficiency cores. The chips would also include either 64 core or 128 core options for graphics. The computing core counts top the 28 core maximum offered by today’s Intel Mac Pro chips, while the higher-end graphics chips would replace parts now made by Advanced Micro Devices Inc.

At the time this was a speculation, but from recent findings, it’s quite possible that we can see these new chips late this year to mid of next year, right before the release of the iPhone 15.

See also  iPhone 15 To Use The Qualcomm X70 Modem | Apple's Own 5G Modem in Production?

Now this is a significant increase in the level of performance of Apple’s ARM-based chips and considering Apple is planning on moving to a 3nm process soon, it’s likely that we’re going to see more high performance and fast chipsets down the line.

As of now, there’s only rumors that the M2 Ultra and the M2 Extreme will power the new Mac Studio as well as the Silicon Mac Pro, but nothing has been confirmed as yet.