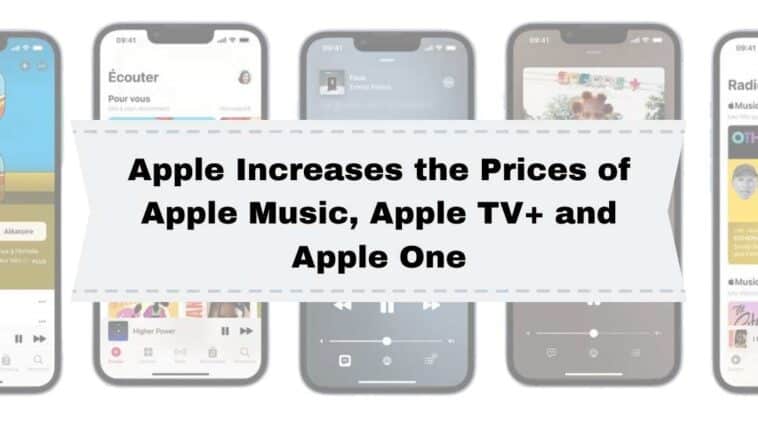 Apple increases the prices of Apple Music, Apple TV Plus and Apple One, starting today.

According to reports, Apple Music will receive a bump by $1 for individual accounts and $2 for family accounts. Apple TV+ on the other hand will increase by $2 across plans and Apple One will receive a hike of $3 a month.

This is the first time Apple has increased the subscription prices of Apple Music, TV+ and Apple One.

Apple Increases the Prices of Apple Music, Apple TV+ and Apple One Worldwide

Apple also stated that along with the increase in Apple Music subscription, artists and songwriters will earn more per stream as compared to before.

Here’s what an Apple spokesperson had to say;

“The subscription prices for Apple Music, Apple TV+, and Apple One will increase beginning today. The change to Apple Music is due to an increase in licensing costs, and in turn, artists and songwriters will earn more for the streaming of their music. We also continue to add innovative features that make Apple Music the world’s best listening experience. We introduced Apple TV+ at a very low price because we started with just a few shows and movies. Three years later, Apple TV+ is home to an extensive selection of award-winning and broadly acclaimed series, feature films, documentaries, and kids and family entertainment from the world’s most creative storytellers.”

Based on the hike, the new prices of Apple Music, Apple TV+ and Apple One are as follows:

International users will also receive a price bump effective from today and current subscribers will get a notification pertaining to the increase in the subscription rates.

The notification will inform subscribers that the new rates will be applicable from the next month’s billing cycle and the 30-day notice period will provide users with enough time to decide whether they should cancel their subscriptions or proceed with the new rates.